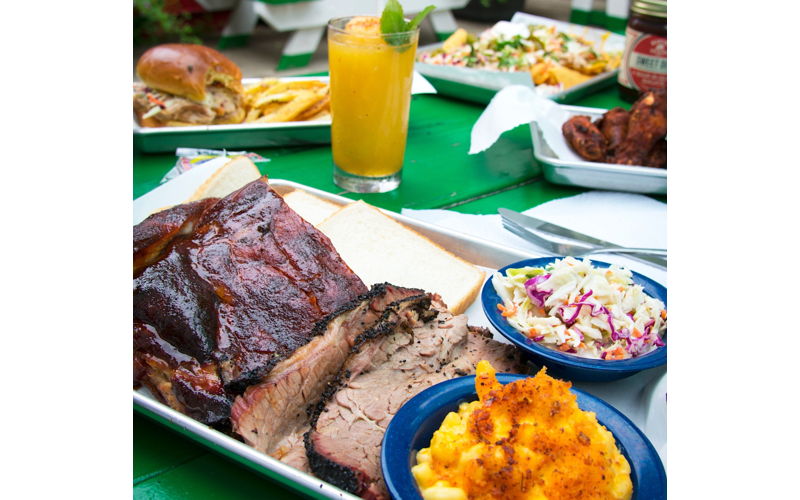 While long-celebrated for our antebellum mansions, moss-covered live oaks, and romantic cobblestone streets, in the past few years, Charleston has added a new draw to the list. Move over shrimp and grits — the likes of Rodney Scott, John Lewis, and Fiery Ron (aka Aaron Siegel) are redefining “Lowcountry cuisine.”

In a landscape dotted with superior barbecue options so stellar they include a James Beard Award winner, do we really need more? Enter Martin’s Bar-B-Que Joint, and a bid to answer that question.

Set off Folly Road on James Island, this recent newcomer is no rookie when it comes to smoking meat. Founded in 2006 in Nolensville, Tenn., this is the 10th Martin’s location along with others in Alabama, Kentucky, and the Volunteer State.

In keeping with its geographic footprint, the menu is vast and covers a wide gamut of options. Appetizers include classic deviled eggs ($4.99), pulled pork-covered BBQ nachos ($10.99), and a half-dozen freshly fried hushpuppies ($4.49). Crisp, fluffy, and imbued with a slight onion flavor, they’re accompanied by a ramekin of comeback sauce, the caper-less kissing cousin of remoulade.

Set in the former Sermet’s Southernterranean spot, Martin’s employs the fairly commonplace “order at the counter and find a seat” semi-self-service model. The space itself is expansive and laid-back, with indoor, outdoor, and open-air options, as well as a large covered bar in the patio area.

While everyone knows you don’t win friends with salad, Martin’s seems determined to prove that wrong, starting with the unexpectedly fresh and flavorful farmer’s salad ($8.99). A bed of crisp spinach and iceberg lettuce are topped with a festive mix of pickled onions, toasted pecans, cheddar cheese and cucumbers, as well as pulled smoked chicken, carrot rounds, and corn kernels. Served with a zingy homemade vinaigrette, each bite offers a different mix of clean flavors.

At the other end of the spectrum, the Southern “Paddy” Melt ($10.99 with a side/$8.74 sandwich only) is a heavyweight. Downright lavish, the large, juicy burger is brushed with Sweet Dixie BBQ sauce, then topped with caramelized onions and pimento cheese, and served on heavily buttered, grilled white bread. Cheesy, greasy, and notably sweet, request a hold on the Sweet Dixie if that last part isn’t your thing.

Also from the kitchen, the duo of catfish tacos ($11.99) feature fresh flour tortillas filled with an ample supply of farm-raised catfish. Heavily breaded in a flavorful batter reminiscent of KFC and glued in place by a bottom layer of melted cheese, the crisp fish is then topped with sweet slaw, pickled jalapenos, and fresh cilantro. As tacos go, it’s a good one, offering another pleasing choice for lighter appetites or those wishing to avoid the meat sweats.

Speaking of which, most likely, if you’ve come to a barbecue joint, you’re seeking smoked meat of some sort. And from entirety of hog to wing of chicken, Martin’s has got you covered.

There are barbecue trays, as well as a variety of sandwiches starring an array of meats. Available wet or dry, the spare ribs (1.5 pounds/$10.99, 2 pounds/$14.99) are beautifully smoked. Despite being given a less-desirable, cartilage-filled end piece, the cookery was spot-on perfect and the meat moist throughout. Similarly, the sliced beef brisket ($15.99) is juicy and intensely smoky, coated in a black pepper rub that gives it a little kick.

While the lovingly prepared meats don’t ‘need’ sauce, there are plenty to choose from, including vinegar-based Jack’s Creek, mustard-hued Palmetto Gold, and mayo-filled Alabama White. Along with some tartness, Sweet Dixie lives up to its name, while Devil’s Nectar will blow you into next year. “No!” exclaimed my dining companion as the initial molasses flavor subsided and the intense, long-lasting heat presumably kicked in. And lingered for several long minutes. Consider ordering a glass of milk in advance.

While there are 11 sides to choose from, vegetarians and vegans can expect to be pretty hard up, as even the green beans seemed to contain meat of some sort. However, non-violators include the standard issue slaw ($2.50), a relatively bland offering made with cabbage and mayo. Likewise, the mac and cheese ($2.50) is acceptable, with a creamy texture and a titch too many breadcrumbs.

The broccoli salad follows the standard issue church potluck recipe, with shredded cheddar, chopped pecans, and Craisins. A first for my dining companion, he likened it to eating “the scrapings from inside a raw pumpkin.” In contrast, we fought for control of the hoe cake, a simple, savory cornmeal pancake whose understated flavors complement the smoky meats.

Speaking of which, the whole hog ($12.99) is juicy and flavorful, and the sliced smoked turkey ($14.49) tender as can be, a true testimony to the folks working the pits. It’s one thing for Pat Martin to win over Nolensville with his well-honed pitmaster skills, but quite another to train others — longtime friend John Haire in Charleston’s case — across four states to (presumably) do it just as well.

While folks will no doubt continue to dine with Rodney Scott, John Lewis, Fiery Ron, and the other outstanding barbecue joints in the area, this new kid from Tennessee brings just as strong a game, rendering our local ‘cue scene better than ever. Barbecue enthusiasts, Folly Beach goers, and Jim Isle residents, rejoice.