Mark Vigeant gets technical in his one-man show, Let’s Make a Website 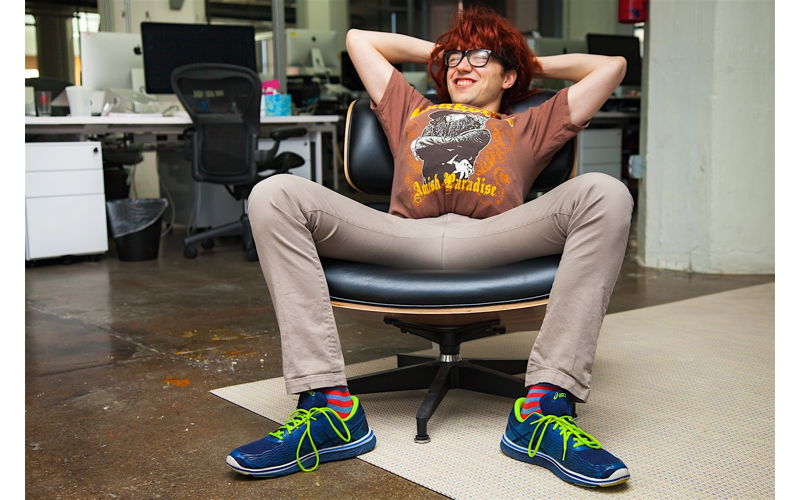 Markvigeant.org, calls itself “a platform for change.” Some of its recent projects include a petition to make banana costumes less expensive. There’s markvigeant.biz, which claims that it’s perfect “for blue-collar folks,” and offers services like laugh-hole repair. And then there’s markvigeant.us, which, in true patriotic fervor, wants to “Make Comedy Great Again.”

These are the websites comedian Mark Vigeant has created in his onstage show, aptly titled, Let’s Make a Website. The Cornell grad is, in fact, someone who can make a website, having graduated with a degree in information science.

“It doesn’t sound like it’d be visually stimulating, it’s me at a desk with a projector,” says Vigeant of his show, which has seen a successful run at NYC’s Upright Citizens Brigade. But he promises the production is livelier than just watching a computer programmer tap away at his keyboard. “I’m talking to the audience, there’s a lot happening — usally on the screen.”

You get a taste for Vigeant’s website-humor when perusing his canon of past projects. Each site mimics the form it mocks — think corny colorblock formatting for markvigeant.biz and a streaming Twitter feed on markvigeant.us. “I wanted to be a comedian,” says Vigeant. “But my parents wanted me to be an engineer.” Taking that age-old dilemma and rolling with it, Vigeant studied engineering at Cornell, but also participated in improv groups. “I think I spent as much time working on comedy in college as I did on my major,” he says.

Vigeant is currently fun-employed, after a couple years working at a mid-level software company, followed by a gig making content videos for seriously.tv, a comedy news site. “I’m making the most out of my unemployment,” says Vigeant. “My goal is to never have to program for money again.”

That is, of course, excluding the programming he does onstage. While Vigeant doesn’t want to give too much away — as he says, “it’s a bit of a magic trick” — he does say that his role as the website-creator has him embodying a cartoonish engineer character. “It’s a combo of everyone I worked with at the software company and who I would be if I weren’t a comedian,” he says.

Vigeant has a lot of flexibility in the kind of guy he portrays — in a one man show, he’s calling the shots. “I’m happy to work in isolation. I’m used to working in groups, where every line is argued about,” he says. “Sometimes you have a really strong vision.” And that vision seems to be working so far.”It’s extremely high-energy,” says Vigeant. “It’s just a comedy show that happens to have a computer. One of my friends described it as,’exhausting, but in a great way.'”