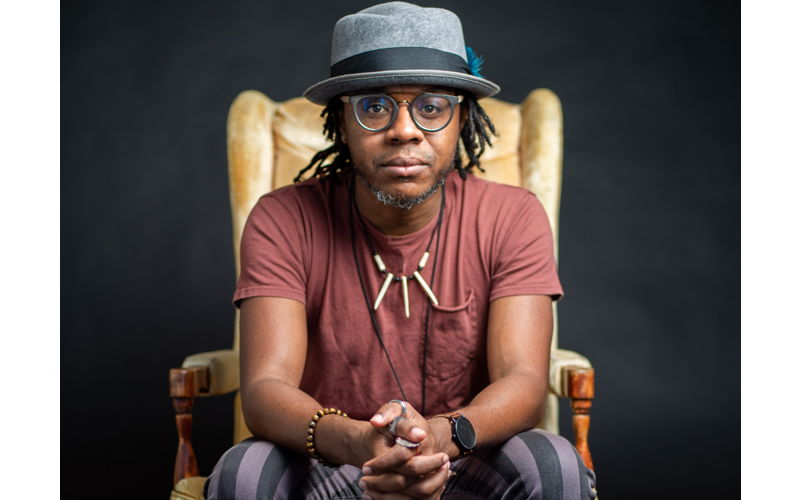 The third annual Free Verse poetry festival is going to be more inclusive and accessible than ever. It’s going to integrate more gender queer artists, something Free Verse mastermind Marcus Amaker realized the festival has lacked in the past. There will be more open mics, and more opportunities for young poets to speak their minds. “I’m trying to push what it means to be a festival,” says Amaker.

The city’s poet laureate since 2016, Amaker has a swath of other roles and titles in town, including Gaillard Center’s artist-in-residence. Amaker is open about why he’s the guy wearing so many hats — in fact, he even wrote a poem about it. “COPY/PASTE” is a spoken word poem Amaker wrote after walking down King Street to attend a Spoleto event earlier this year. As Amaker says it’s a “poem about being the only black person in many spaces in Charleston.”

He writes: “I am a free token / for closed minds / who are broke with blind eyes, a splash, / a cool glass / for the sun’s predictable clash / with Charleston streets.”

It can be disheartening to, as Amaker writes, “be so alone.” And yet he continues to write, to be present, to give this city a festival that offers something many of us didn’t know we needed.

Amaker embraces these opportunities — as poet laureate, artist-in-residence, speaker in schools — and sees them as a chance to introduce new, perhaps lesser known voices to the city.

Two of this year’s festival speakers may not be familiar names in Charleston, but they’re damn famous in other realms. The first, Jericho Brown, is described by Amaker as a “badass.” He’s received fellowships from the Bread Loaf Writers’ Conference, the Guggenheim Foundation, and the National Endowment for the Arts, among others.

Last year the New York Times listed Brown as one of 32 “Black Male Writers For Our Time,” writing:

“The poet Jericho Brown says black people don’t have the luxury of being quiet: Every black behavior, no matter how banal — getting out of a car, walking down the street — draws attention or ire. Black bodies, by their very existence, are turned up to the highest volume at all times. All of this is exacerbated by the fact of maleness in our sexist society: Men, even vilified men, outrank women in the hierarchy of being; they are more seen. It is in this charged reality that the work of black male writers finds itself in the spotlight.”

During Free Verse, Brown will speak at the City Gallery on Oct. 13, followed by a talk at Burke High School the next day. “He’s doing a workshop — and I’m going to be in the classroom,” says Amaker, as eager to learn from Brown as any aspiring student poets.

Free Verse’s other well-known speaker is Andrea Gibson, a poet and activist currently based in Boulder, Colo. “They are super queer and just amazing,” says Amaker of Gibson. “They’ve been touring the world for a long time and published a few books and put out a few albums — for poets to say that name, people are freaking out.”

Gibson’s most recent book, How Poetry Can Change Your Heart, is designed to make poetry more accessible for everyone — a goal that aligns quite well with Free Verse. Gibson performs on Oct. 18 at the Charleston Music Hall. Tickets are just $10 and Amaker expects to draw a crowd of folks from nearby cities as well as those in town.

Additional Free Verse events include a youth poetry slam at the Gaillard, HEART (an inclusive arts community) at the Dart Library, and poetry and pancakes at Daps. Amaker says that every year the Gaillard’s poetry slam grows, moving to bigger and bigger spaces in the city-owned building. Kids get to take up space, use their voices. The performers of HEART get to do that too with their performance at Dart Library, where they’ll read from their debut pocket poetry zine. Amaker will work with the Heart performers in the weeks leading up to their performance on Oct. 15, and the zine will be available all over town after that.

Poetry and pancakes kind of speaks for itself, no? Head to Daps on Oct. 20, order some pancakes, and Amaker will type up a poem (on a typewriter, natch) for the table. Just give him a few key words and he’ll handle the rest.

There’s also a performance at the Gibbes on Oct. 17, a collaboration between Amaker and Quentin Baxter (a famed musician in his own right, as well as a member of Ranky Tanky). “We’re going to the studio a month prior,” says Amaker, who has collaborated on a number of projects with Baxter in the past. “So we might have an album, we might not. At the least we’ll have the debut of new stuff.”

A couple of weeks after the festival, Amaker is bringing something special to the Gaillard stage. As artist-in-residence he gets a yearly stipend and as he says “free reign” to do what he wants with the Gaillard space. So, for the first time, a hip-hop show will grace the stage of the Gaillard. Amaker brings local hip-hop artists Cody Dixon and Niecey Blues to the stage, performing for 3,000 students.

That’s right — area high school kids from mainly black schools, will get to take in a hip-hop show at the Gaillard, with 1,500 kids at each seating. “Anything that has a ‘center’ name on it, I’m challenging them a bit,” says Amaker of the Gaillard. “Center of what?”

The festival will have its usual assortment of pop-ups (Amaker has some ideas for a guerilla poetry night at local bars and restaurants) from poetry on D’Allesandro’s pizza boxes to a partnership with Charleston Moves that puts poetry tags on bikes. Words, blanketing the city. It’s just Amaker doing what he does best — pushing what it means to put on a festival, sure, but also what it means to live and write in this city. Let’s join him.