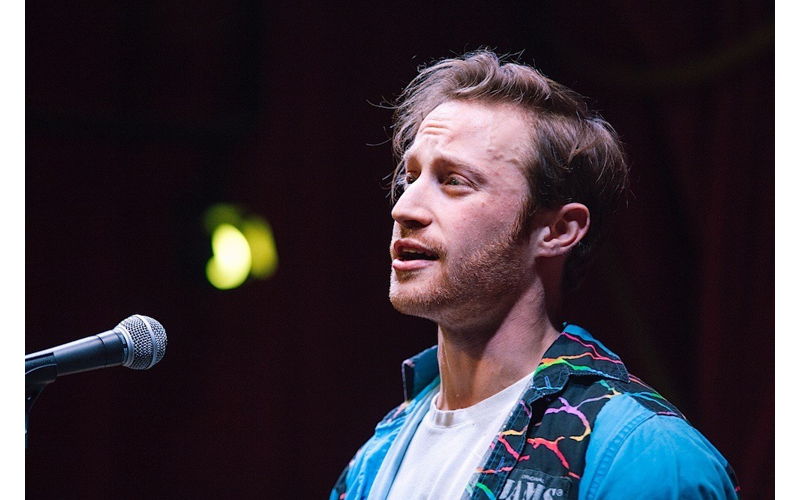 We need more honesty in our communities. We crave camaraderie and connection. And in these turbulent times, embracing our humanity may be what pulls us through. This is the philosophy that flows through Marcus Amaker’s Free Verse Festival, now in its second year. Free Verse celebrates expression of the human experience with poets, writers, and artists from across the nation sharing their truths. But the festival isn’t limited to poetry aficionados. Amaker, as Charleston’s first poet laureate, is on a mission to prove that poetry is accessible to anyone. No matter your interests, beliefs, or background, all with an open mind and heart are welcome. “Poetry is a powerful art form,” says Amaker. “It’s wide open. It allows people to have real conversations, to express themselves truthfully. That’s what’s beautiful about poetry.”

Amaker carries with him a sense of great purpose and devotion to the community. He brings poetry to schools, workshops, publications, music, and public spaces. “It still amazes me sometimes to be in this position [as poet laureate],” he says. He was honored with the designation after writing “Black Cloth,” a poem lamenting the horrors of the Emanuel nine massacre.

Following the poem’s publication in the City Paper  a week after the shooting, Amaker was able to meet with family members of victims. Later, Mayor Tecklenburg granted him the title of poet laureate. “I’m an eternal optimist,” says Amaker. “I’m always hopeful that things will get better. I think it’s time for people to realize the value of poetry. The human spirit is timeless.”

Free Verse’s events span one week and take place within multiple, sometimes surprising, venues. “That’s been a mission of mine as poet laureate is to have poetry in places that people don’t really expect,” says Amaker. “There’s the stereotype of poetry in coffee shops. It’s great to see that expanding. I’m really proud of the creative collaborations that are happening and the different energies and people coming together.”

The one element that Amaker felt was missing from last year’s festival was a pinnacle event. This year, that event will be Spoken Words, held on Oct. 20 at Memminger Auditorium. Spoken Words spotlights Trinidadian born and multi-award winning poet, Cheryl Boyce-Taylor, mother of the late Malik Taylor, a.k.a. Phife Dawg, who rapped as a member of A Tribe Called Quest. Amaker considers Tribe an inspiration and has referred to Boyce-Taylor as the mother of hip-hop. He’s collaborated with her on a poem which will debut at the event. Amaker writes on his website, “The outpouring for Tribe is global. There’s so much to learn from his work … and he learned it from HER.”

Even if you aren’t familiar with A Tribe Called Quest, you can appreciate the beauty of Boyce-Taylor’s poetry, which has largely and lately been influenced by the cruel and painful experience of a parent losing a child. Spoken Words will also feature mental health advocate and NYC Slam Poet, Mike Rosen and Charleston native, Tyquan Morton, a sexual assault and domestic violence victim advocate who just self-published his first collection, Remembering Pluto, in March.

In addition to numerous, diverse events, the spirit of the festival has already saturated Charleston through a Poetry as Public Art initiative, which kicked off at the beginning of October. “It’s important to me that the festival goes beyond the events,” says Amaker. “I really wanted public art to be more of a focus this year than last year.” Locals traveling to and from work, students between classes, or tourists touring may hop on a bike and find a poem on a paper tag suspended from the handlebars.

“Lost Poem” flyers resembling “Lost Pet” notices are posted around town and direct readers to a telephone number. Call the number, and you’ll listen to a recorded poem, bringing the rhythm of spoken verse to listeners’ ears — as poetry is often meant to be heard. Certain collaborating storefronts feature a written poem on their windows for customers to chew over as they come and go. “That’s part of my mission is to help poetry not be as intimidating as it might seem to someone who’s never been to an event,” says Amaker. “Anyone can listen or participate. That’s part of why I wanted to do the public art piece, so people can interact with poetry even if they aren’t familiar with the events or the art form.”

Free Verse events take place from Oct. 17-24. Learn more at freeversefestival.com. While most events are free, tickets for Spoken Words can be purchased for $10 online.

Critics’ Picks: Free Verse Festival is back and brimming with poetry