Marcus Amaker continues to be an influential triple threat 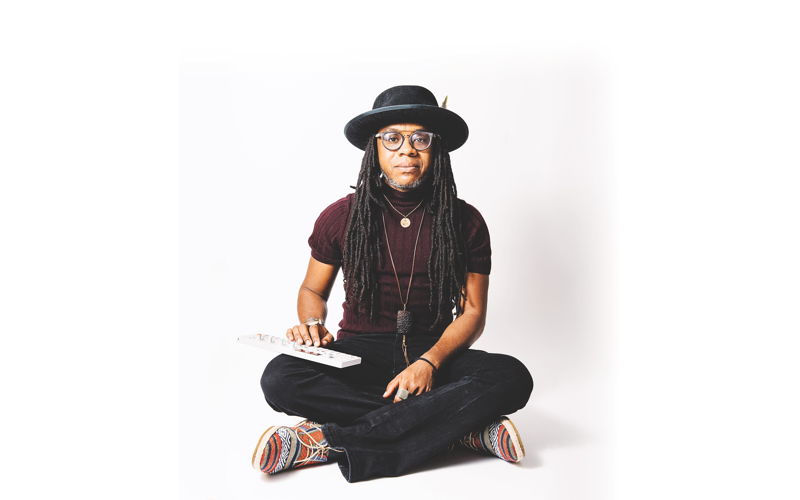 A man of many talents

To say Marcus Amaker is a poet is equal parts understatement and partial truth. He’s proven himself several times over to be an adept electronic musician just as often as he’s cut into the Charleston zeitgeist with his words. And just as he puts words into the air, he’s crafted layouts for websites and publications from the background.

But, a lot of that misses Amaker’s amiable personality outside of the spotlight, along with some of the things he prides himself on the most, namely fatherhood. Through each of his ventures, some more public than others, Amaker has helped capture moments of clarity, joy, pain and history for a sometimes weary city.

He’s also given people a glimpse into who he is behind the scenes, as he carries his experiences into every avenue of his art.

The moment that put Amaker into mainstream Charleston’s conscience the most was likely receiving his title of poet laureate in 2016. As the city’s first poet laureate, Amaker is a trailblazer for the city’s arts scene. In his time in the position, he has advocated for the value of art and artists.

“There are so many people who create or write, and a lot of them don’t think of it as a viable career, like it’s something that’s a side-gig,” he said. “I’ve really made it a point to fight for funding to remind them that this is work.”

The poet laureate position also fast-tracked Amaker to another post in the city: educator. While he mentored students occasionally, describing the experience more as a hobby, Amaker’s title has given him the chance to reach out to students en masse.

“Schools all around the country have connected to me, and said, ‘Hey, can we use your poem in our class,’” he noted. “I’m glad my Google Analytics are good.”

For the last four years, Amaker has been commissioned by institutions around the city to compose poems, while also creating original work for his own career. His 2020 book The Birth of All Things, which shares the title of an album Amaker wrote inspired by his daughter, is another set of poems that depict Amaker as an individual beyond his perceptive stage persona.

“Initially it was going to be a book just about being a dad,” he recalled. “But being a writer, so many things were coming up for me.”

He confronts injustice and makes astute descriptions of the world in melodic prose, but also uses the book’s pages to print poems on music, Star Wars and love for his wife and daughter.

Collaboration continues to be an important idea for Amaker, and it stretches beyond the city. Opera composer Shawn Okpebholo recently collaborated with Amaker for lyrics in his upcoming work at the Kennedy Center.

“When I looked at his work, the way he was emoting and singing, it took me to a place that other art forms haven’t,” Amaker recalled. “It actually slowed things down for me a bit and made me think about each word in a way that I don’t think about if I’m doing stuff over an electronic beat or even jazz.”

Since 2019, Amaker has been the artist-in-residence at the Gaillard Center, where he conducts school workshops and hosts educational events on the Gaillard stage. Amaker also organizes Charleston’s annual poetry festival Free Verse, which has gained momentum in the last two years thanks to performances from poets like Andrea Gibson and Aja Monet.

Last year, he used his position as Gaillard’s artist-in-residence to host a “poetic hip-hop” show during Free Verse. This year, he also began a series with trumpet player Charlton Singleton titled “Raising the Volume,” where the two men discuss race in Charleston.

Music has always been an avenue for Amaker to express what spoken words can’t. Just as the city has found in his poetry, he’s got a lot to say. Between his 32 albums (yes, 32), Amaker crafts ambient electronic tones for a large margin of topics which range from a sound collage about the atomic bomb to beats inspired by the arrival of his daughter.

“I started when I was 10,” he said. “It’s just something that I default to if I’m ever bored or if I’m really inspired or if I’m excited or if I’m sad. The music comes out of me, and I love creating stuff on vintage instruments.”

His latest LP, subversive, may live up to its title for listeners only familiar with Amaker’s calm-voiced poetry, but people that have kept up with his music career will recognize its lo-fi electronic sounds.

“I didn’t want it to be transparent,” he said about the album. “I wanted it to be a little bit mysterious, a little weird, a little bit confrontational, which I think is in my poetry, but people aren’t connecting to that layer of it.”

Tracks like the drum-driven “sluggard” and the haunted “gloam” rely on Amaker’s spacey loops to represent the short bursts of poetry repeated throughout. The album is so eclectic that it’s tough to pin down influences, but Amaker points to acts like Nine Inch Nails and Moor Mother. The final track on subversive is a calm and eerie cover of Metallica’s burning and furious song “Frantic.”

“I’ve always been a Metallica fan. Particularly the band’s late-period work,” Amaker wrote in a press release for the album. “The lyrics of ‘Frantic’ are a poem waiting to be brought to light.”

A dance film to compliment the album was created by director Jai-Anna Carter and dancer Jordan Benton. Just like the music, Carter and Benton’s production is an experimental and glitchy ride. It relies on post-production editing, creative choreography and smart camera work to outline and represent the themes in Amaker’s music.

Carter said that subversive reminded her of the emotions she felt throughout 2020, including claustrophobia, confusion and the feeling of time passing.

“This discovery of self and acknowledging the complexity of the human psychological experience was a process that helped me as an artist create visuals without so much of an explanation,” she said.

Amaker is a creative outside of the avenues that put him in the public eye, as well. A lengthy history in graphic design has allowed him to hone his prowess in visual art, skills he puts to good use as the designer of quarterly grassroots music journal
No Depression.

“I’ve been designing it for eight years now,” he said. “It was a natural thing for me because I did Charleston Scene. I was the editor of that, but I was also laying it out.”

In addition to web design and designing posters for Charleston Jazz, Amaker considers No Depression his 9-to-5, a welcome change of pace to extensive public artistry. “It’s also nice to be in the background for that,” he said. “It’s not something I put out there as much.”

There seems to be no shortage of public victories on which Amaker can hang his hat. When he looks at his career, or careers, at this point, he said he is more focused than ever before as an artist and as a person.

“I can thank my daughter for that,” he said. “Almost everything that I did in the past — I didn’t really think it had any life to it beyond the moment, beyond whatever project I was doing. Now, I’m seeing this can be something I can benefit from years from now.”