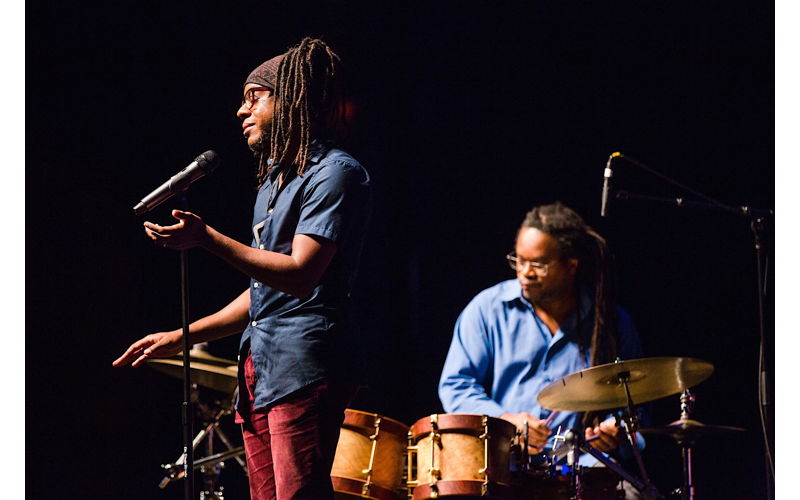 You know who Marcus Amaker is. Maybe you’ve never seen him — grinning behind his glasses, his face almost splitting in two if he’s laughing — but surely you’ve heard him. His sure and steady cadence has infused this city with poetry — spoken words about the ugly history of Charleston, about the city’s natural beauty, about the pecularities of its people. You’ve heard Amaker. He’s the voice of Charleston.

“I want poetry to be in people’s faces,” says Amaker. So he’s throwing it to us with Free Verse, a month of poetry-related events. Amaker’s most excited about the public displays of poetry around the city, an idea he got from O, Miami, a poetry festival in, yes, Miami, where you’ll find poetry all over city walls and rooftops. “They put poetry on the tops of buildings near the airport, so as you’re flying away you can read a poem,” says Amaker. “I said, ‘Man, a festival needs to go beyond this idea of going to stuff at night.’ I wanted there to be an interactive element.”

In addition to proposed poetry art on buildings on the Upper Peninsula, Amaker plans on dropping off napkin poetry at bars around town. “Some are going to be fill-in-the-blank so I think it will be really fun to be at AC’s and see people filling those out. I really want to see that,” he says. “I want people to experience poems even if they don’t know what’s going on. It’d be great if someone said, ‘Oh there is so much poetry around.”

While Amaker’s title as the city’s first poet laureate might make it seem like Charleston’s just getting hip to the poetry scene, Amaker assures us that’s not the case. “The scene’s been going on for a long time, I’m just in a great position to help push it forward,” he says. Amaker’s been in Charleston for almost 15 years now; when he first arrived he says that Jonathan Brown, who now lives and teaches in New Orleans, was “the” city’s poet.

On Wed. Oct. 4 Amaker’s bringing Brown, along with Harold Singletary, who hosted an open mic in the early 2000s, together for the Poetic Jazz Society. Held at the Dock Street Theatre, the evening will also feature musical performances from Quentin Baxter and Charlton Singleton. “I don’t know if it’s ever been that funky,” says Amaker of the Dock Street. “For me it’s an old-school night.”

There will be plenty of new-school, if you will, nights, too. Amaker credits fellow Charleston poets Matt Foley and Derek Berry with inspiring him and keeping the poetry dream alive in Charleston. “I had reached a point where I was burned out,” says Amaker. “I’ve been here 14 years and I did an open mic with Matt Hampton back in the day, but then I got burned out. Matthew Foley introduced himself and was like ‘Hey man,’ and I was like, ‘Who are you, you young fool?'” laughs Amaker. Foley and Amaker ended up becoming good friends — Foley was one of Amaker’s groomsmen in his wedding — and they, along with Berry, the mastermind behind local group Unspoken Word, have been spreading poetry around town for years now.

As poet laureate, Amaker was tasked with bringing even more poetry into Charleston, something he’s actively done in local schools through both performances and workshops. The festival kicks off this Friday with visiting group Mayhem Poets, performing for students at the Gaillard, along with Unspoken Word. “I need poetry to be cool,” says Amaker. “It’s cool to be in a band, but it’s not as cool to write poetry.”

Amaker wants all kids to love poetry, but he really wants kids of color to see that they can stand behind a mic and speak their truths. “I need kids, especially brown kids, to see us out there,” he says.

With this in mind Amaker says that he has made Free Verse “intentionally black,” and the themes of several of the events reflect that. On Sat. Oct. 14 there’s Blank Page Poetry, what Amaker calls a “theater experience.” Poets stand behind a screen and the audience can see their shadows, and hear them, with the words of their poems projected onto the screen. “The whole night is about gentrification, with poets doing original work about gentrification in Charleston,” says Amaker. “I had an 81-year-old write a poem and send it in. There’s a lot of people awakened to what’s happening in Charleston and writing about it and open to performing it. It’ll be poets that I’m excited to give a platform to.”

Amaker has partnered with MOJA, which also starts this week, to present a number of poetry readings throughout the next week, with poets like Ridgeville, S.C.’s Horace Mungin, Columbia, S.C.’s Tammaka Staley, and Raleigh, N.C.’s Jeffrey Guillaume. “I want brown faces to be in the forefront,” says Amaker of Free Verse. “This year’s MOJA lineup is really good. I’m excited to be a part of it.”