Making the past present at City Gallery’s Interwoven exhibit 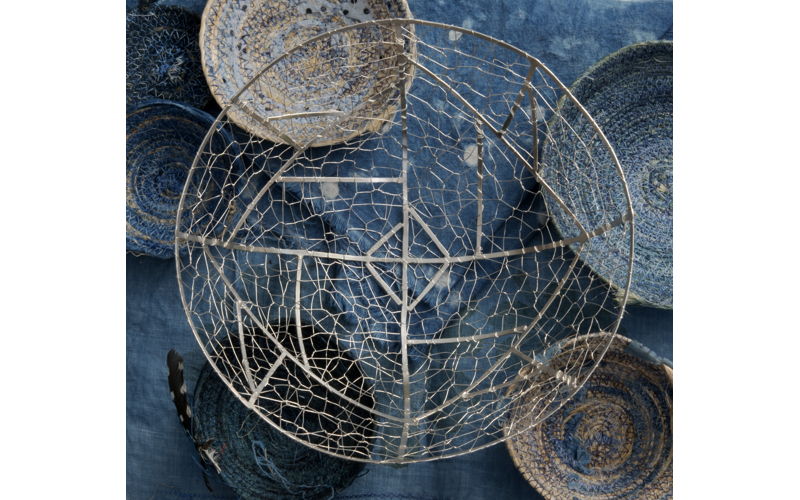 As Southern Living extolls, “The Good Silver is a Southern stalwart.” Indeed, one automatically pictures immaculate tea sets and monogrammed flatware passed down generation after generation, of the sort you might find on display at the Charleston Museum. On the other side of the silver coin, there’s the stock and lash of chattel slavery, required to extract the indigo that lined the pockets of wealthy planters and set the table, so to speak, for standards of wealth and culture.

It’s a history of which Brandy S. Culp, the Richard Koopman Curator of Decorative Arts at the Wadsworth Atheneum in Hartford, Conn. and guest curator of the City Gallery’s upcoming exhibit Interwoven: The Art of Indigo and Silver, is well aware. The exhibit, she explains, is “ultimately about layers of history and meaning, and how we find meaning in materials.” The show will feature three artists heavily influenced by Charleston history and culture including silversmith Kaminer Haislip, textile designer Leigh Magar, and photographer Jack Alterman.

The project began two years ago when Haislip, one of the few formally-trained silversmiths practicing in Charleston, and Magar, known for her “seed to stitch” project, which takes indigo grown in her own garden and uses it to create hand-dyed and hand-stitched garments and goods, approached Culp.

“They wanted me to guest curate this exhibit, so we started with discussions of silver and indigo and how they related.”

With her rich background in the history of decorative arts, Culp explains that indigo and silver were both highly prized as raw materials throughout the ages, globally traded as commodities, and historically transformed by artisans into objects of desire.

“There’s a lot of commonality between these two as raw materials,” she says, “So what these artists have done is they are looking at these two transformative and symbolically imbued mediums and exploring how people actually shaped resources that, in turn, influenced society.”

In fact, it is South Carolina’s own Eliza Lucas Pinckney, the 16-year-old daughter of a wealthy planter, who is credited with first introducing and successfully cultivating indigo in the American colonies in 1742. Long before the ubiquity of today’s blue jeans, at the time, indigo dye was rare and expensive. Like silver, it was a symbol of status and wealth. In the two decades after its introduction, indigo would become one of the colony’s largest exports, second only to rice. That also led to a spike in the importation of enslaved labor to carry out the challenging and time-intensive process of extracting the dye, which could involve pounding the plant for up to 20 hours.

The title of the show, Interwoven, however, refers not only to this shared history and symbolism, but also to how the past and present are worked into the artists’ contemporary interpretations of these mediums. Culp explains, for example, that while Magar and Haislip have collaborated on a number of pieces for the exhibit that meld the elements of indigo and silver, they will also be displaying individual works. For Haislip, that means giving visitors, far removed from the processes of metalwork, the experience of how she forms and forges her pieces, which, while heavily influenced by tradition, are completely contemporary in their design.

“In today’s society, so many people look at her work and think that it must be cast, or that it’s fabricated,” says Culp. “She is a traditional silversmith still using a lot of the tools and the processes that people have been using for hundreds of years.”

Alterman, a Charleston native perhaps best known for his diverse portraits that capture the city’s many faces, was brought in to tie the whole story together. Through his photography, he will not only document the work on display, but will also have a series of portraits of other local artisans directly or indirectly connected to the craftmanship of indigo and silver.

In addition to the label copy that will provide some historical context for the role Africans and African Americans played in the production of indigo and silver, Culp indicates that Alterman’s contribution is also important because his portraits showcase contemporary African-American artists working in or connected to these mediums as well, including Jonathan Green and Arianne King Comer.

“This exhibit is not a comprehensive look at the subject of indigo and silver,” she acknowledges. “It’s a very specific look at these materials through the eyes of three artists. There are so many talented people that are both metalworkers and textile artists involved in indigo.”

To get a full picture of this interweaving narrative, Culp also recommends that audiences attend the artist talk, which will take place on Sept. 8 at 2 p.m., where the exhibitors will be on hand to discuss the most important stories in their work and to take audience questions.