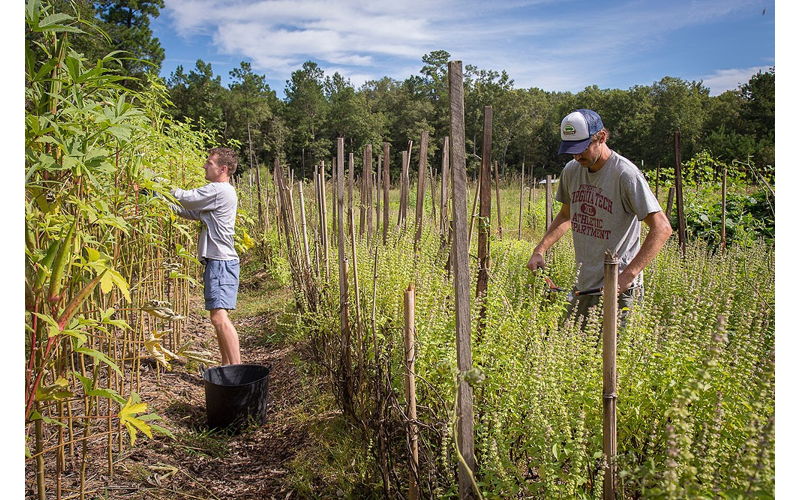 We hate to say it, but the word Kickstarter often makes us roll our eyes. In today’s crowdfund-happy world, every conceivable idea from manufacturing bespoke toothpaste to starting a line of sweaters for alopecia-suffering pandas seems to get an IndieGoGo campaign. So it was with some trepidation that last year we published an article on a guy named Lindsey Barrow, who wanted to start a mobile farmers market via Kickstarter. Certainly well-meaning, Barrow’s credentials all added up.

After finishing school at the College of Charleston in 2012, Barrow went to Hawaii, where he served as legislative aide for Hawaii State Representative Corinne W. L. Ching. During this tenure, Barrow’s primary responsibility was to oversee ongoing efforts to address the growing diabetes epidemic in the district’s low-income communities. Taking matters into his own hands, Barrow also spearheaded an initiative, joining local community members in establishing a farmers market in an area where residents lacked access to healthy, affordable food.

The idea took hold, and when Barrow returned to Charleston, he was struck by the similarities of need. Here he found the same limited access to healthy food in low-income areas, despite being in a region of remarkable agricultural abundance. The idea for the Lowcountry Street Grocery (LSG) was born. But could the earnest do-gooder get the funding to not only buy a vintage school bus, but retrofit it into a grocery-selling machine? Well, he has and he will. With 551 pledges and $47,002 later, Lowcountry Street Grocery plans to hit the road early 2016.

Where some might see a white 1988 Ford B700 school bus, Barrow and his business partner Kate DeWitt have envisioned a revolution. Lovingly named Nell, the cheerful white bus is more than just a means to an end.

The USDA estimates that 23.5 million people live in “food deserts,” low-income urban neighborhoods and rural towns with little to no access to grocery stores or other healthy, affordable food retail outlets. Rather, in the immediate mile surrounding them, these citizens are serviced only by fast food and convenience stores.

Charleston is home to 11 such census tracts with an estimated 23,000 individuals impacted. It’s not just about the comparable financial cost of Pop Tarts and Big Macs. Research has shown those citizens are at particular risk for higher levels of obesity and other diet-related diseases, such as diabetes and heart disease. Currently, South Carolina ranks tenth with respect to adult obesity rates (31.7 percent) in the United States. Accordingly, one in three low-income South Carolina children, two to five years old, are considered overweight or obese, a problem that amounts to $1.2 billion in obesity-related healthcare costs each year.

“Food is deeply personal, deeply cultural, and, as such, access to it should be the thing that connects us all,” says Barrow. “We know that a point-of-sale is just the beginning of what healthy food access really means. That’s why in addition to fresh produce and other grocery essentials, our mobile market will also deliver free nutrition education programming.” From garden starter kits to healthy meal kits and recipes to cooking and food preparation demos, DeWitt and Barrow hope these programs will help shoppers integrate healthy food and eating into their lives.

But back to Nell. She’s no ordinary school bus. The KITT of the farm-to-table scene, she’ll feature a two-aisle, indoor/outdoor traveling neighborhood grocery with coolers and freezers for proteins, fish, eggs, and dairy. Her exterior will be lined with dozens of produce-filled farm crates that fold up when the vehicle is in motion and customers will be able to pay via cash, card, or SNAP/EBT.

“Our mobile market will provide farm-fresh fruits and vegetables, as well as other grocery essentials like breads, dairy, meat, and eggs,” says DeWitt. “Whenever possible, these will be sourced locally and organically. This means that our produce selection will be seasonal, so on any given summer day you might expect to find beets, squash, tomatoes, okra, cilantro, and peppers adorning our exterior produce rack, just to name a few.”

“The problem in Charleston’s local food system is one of access, not availability,” says DeWitt. “We enjoy a nearly year-long growing season here in the Lowcountry, and we’re home to some of the best restaurants, chefs, artisans, local producers, and farmers out there. It’s just a matter of overcoming some of the geographic and economic barriers that limit access for some shoppers. That’s really where the mobility piece is key. Our mobile market will work to overcome those barriers by not only making the healthy option available, but also convenient and affordable.”

Waste not, want not

Whether by luck or design (we suspect the latter), LSG’s reach aims far beyond the 11 “food desert” communities and their residents.

“First and foremost, our goal is to be as inclusive and supportive for local growers as possible,” Barrow says. “We’re really excited about the fact that LSG will provide a venue for a lot of young, small, and beginning farmers here in the Lowcountry. These producers often have a hard time finding a way into the market — they just don’t have the economics of scale to go through traditional channels.”

“It’s a type of partnership that we hope will improve the vitality of these productions,” continues Barrow, “and connect our customers with the specialty products they want.

A prime example is LSG’s partnership with organic farmer Harleston Towles. Owner of Rooting Down, a two-acre operation focused on traditional Sea Island vegetables and heirloom varietals, Towles’ Sea Island potatoes will be featured aboard the bus. In order to keep inventories consistent and regular, LSG also plans to work with larger suppliers.

“We’re establishing creative, innovative partnerships now with larger suppliers and retailers so we can ensure that staple seasonal varieties are consistently available for shoppers when they visit the bus,” DeWitt says. “We’re really excited by one of these partnerships in particular, which includes the potential for ‘food rescue’ donations — food items removed from store shelves to make room for newer shipments — that would otherwise be disposed of will be funneled to our shelves at a reduced cost.”

The USDA estimates that 31 percent — or 133 billion pounds — of food is wasted in the U.S. annually. A significant portion of that waste comes from traditional grocery retailers.

“We think that the mobile market approach offers the perfect, responsive, flexible outlet to intervene in that kind of waste and put food into people’s shopping carts rather than a landfill,” DeWitt adds. “We’re very pleased to be working with a partner retailer that feels the same, and is equally committed to addressing this issue.”

The mission isn’t just about supporting local farmers or reducing food waste, but overall health and wellness on a large scale. The bus will function as a community-supported market, meaning that they’ll reinvest the revenue they generate to provide reduced pricing and free nutrition education in low-income food deserts. “That means every time our shoppers buy fresh, healthy food from our mobile market, they’re not only helping to support local farmers, they’re empowering a family in an area of need to do the same,” says DeWitt. “In low-income areas, we’ll implement an affordable pricing strategy via acceptance of Electronic Benefit Transfer/Supplemental Nutrition Assistance Program (EBT/SNAP) benefits. LSG will also pilot South Carolina’s Healthy Bucks program, where SNAP benefits redeemed at healthy food outlets are matched dollar-for-dollar, increasing the purchasing power of these shoppers.”

“If the increase in obesity rates can be halted,” Barrow says, “South Carolinians could save $3 billion dollars in healthcare spending by 2018. Our mobile market provides a replicable model that harnesses demand to sustainably and effectively meet the growing need to improve healthy food access in low-income areas in the Charleston area and beyond. We’ll measure our impact by tracking the number of customers served, total sales, and pounds of healthy food distributed in low-income areas per month — effectively gauging ‘food desert shrinkage’ with every Mobile Market Bus stop.”

Ease on down the road

Like Nell, the Lowcountry Street Grocery is still a work in progress. “A couple of things that we would love to include in the grocery that we haven’t come across locally yet include vegan or vegetarian snacks and/or dried fruit snacks, local yogurt, milk and cream,” adds DeWitt. Non-farmers and vendors can contribute, as well, and the founders have an open call to individuals and volunteer groups. “We’re dedicated to doing the work ourselves wherever possible,” notes DeWitt. “We are sanding, painting, customizing, and retrofitting for the big facelift … and volunteers are urged to contact us about spending a day working on Nell.”

In an oft-repeated, yet consistently powerful sound byte, the duo regularly notes, “We believe that where you live shouldn’t determine what you eat — and we also believe it doesn’t have to. We’re consistently named the No. 1 city in the U.S., and yet two miles outside of downtown, children are living farther below the poverty level than anywhere else in the state. There must be some ways we can come together as a community and begin changing that.”

As much a solution as a call to action, the Lowcountry Street Grocery and her vehicular persona, Nell, are a humbling example of good intentions focused and forged into in-your-face, change-making reality. And long may she run.