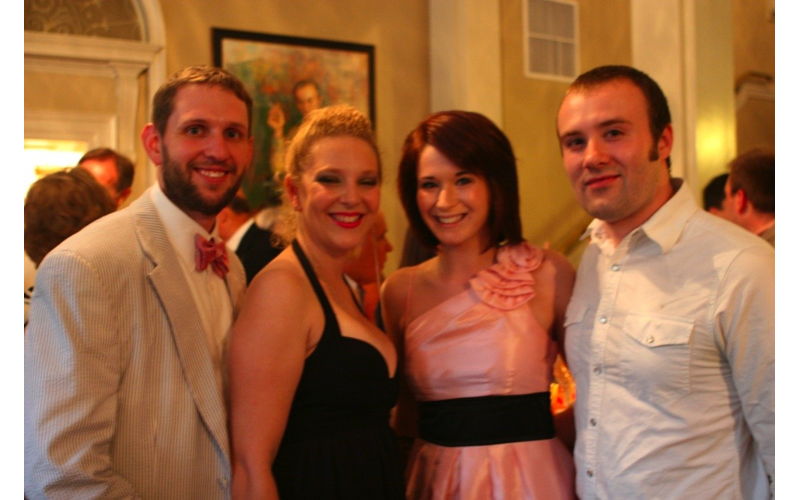 Charlestonians love a good celebrity sighting. After Saturday night’s event at the Dock Street Theatre, we should be set for a few weeks at least. Husband-and-wife duo Michael Emerson of ABC’s Lost and Carrie Preston of HBO’s True Blood appeared at the Charleston Stage fundraiser, performing a reading of A.R. Gurney’s Love Letters, followed by a brief but intimate Q&A session.

Preston is the pair’s Charleston connection. The actress, who’s also appeared in movies like Duplicity and Vicky Cristina Barcelona, briefly attended the College of Charleston and played Anne Frank in Charleston Stage’s production of The Diary of Anne Frank in 1986. “I found a home here,” Preston said, gesturing at the Dock Street stage where she’d performed years before. “I treasure this as one of my favorite things that happened when I lived here.”

Before the show, guests mingled in the Dock Street’s lobby and courtyard, sipping spiked lemonade cocktails. The reception began around dinner time, resulting in a very hungry crowd — they swarmed like locusts around the trays of hors d’oeuvres, wiping them out within seconds. During the performance, growling stomachs distracted an otherwise captive audience.

Emerson and Preston entered the stage hand in hand, then sat with their scripts at large desks on opposite sides. They went on to give an amusing and emotional reading of Gurney’s play, which explores the relationship between one couple through their letters, which span nearly half a century.

After the show, the pair took a seat with Charleston Stage Associate Artistic Director Marybeth Clark. Gushing fans asked weighty questions (like what would happen if the cast of True Blood landed on the Lost island), and the couple happily filled us in. They talked about watching each other on TV — Emerson has a crush on Preston’s True Blood character, Arlene. “I’m fascinated by this other woman she becomes, this trashy redhead,” he said. Preston, on the other hand, admitted to being a little scared of Emerson’s villainous Lost character, Ben Linus. “I’ve said to him, ‘Don’t ever look at me like that,’” she said.