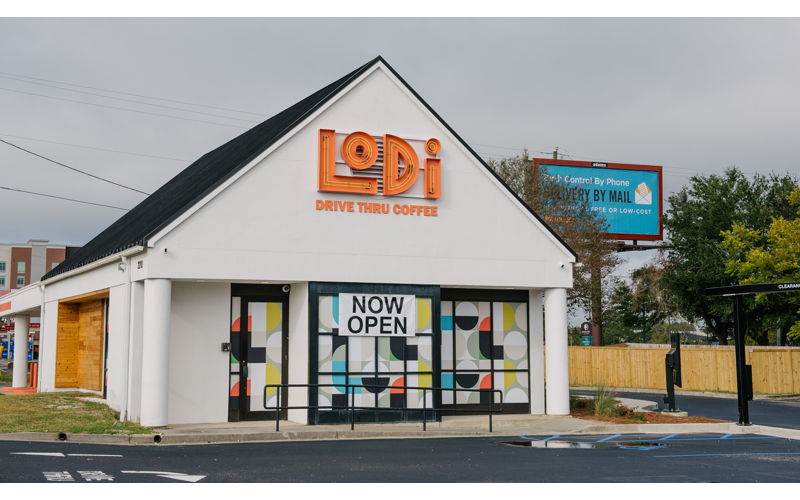 Jen has always loved coffee, but it took her husband Johnny a special cup to hop on the caffeinated bandwagon.

“We were married in Rome, and I convinced him to drink espresso at our wedding,” Jen said. “Once he did, he fell in love, and it’s kind of been our dream to have a coffee shop since.”

Lodi Coffee isn’t the exact shop the Grossos pictured when they decided to launch the business last year. Plans for a location serving drive-thru and dine-in customers at the intersection of King and Huger streets were put on hold while the couple waited on approval from the city of Charleston, Jen said.

“We hadn’t gotten approval yet for the downtown one, so in the meantime we started looking at other potential locations,” she said.

The Grossos landed on the repurposed bank that Lodi Coffee now calls home, at 2210 Ashley Phosphate Road. Named after an Italian enclave in New Jersey, Lodi Coffee debuted on Oct. 20 and is now open daily from 6 a.m. to 6 p.m.

“There seemed to be an opening for really delicious craft coffee with the quickness of a Starbucks. We’re giving you that experience of that really enjoyable moment with your beverage but in your car or on-the-go,” she said. “People really seem to get the concept. There’s plenty of drive-thru-only shops out west, and we’ve had a lot of Charleston transplants that just get it.”

Beverage director Michael Mai, who used to lead Mercantile and Mash’s coffee program, is catering to coffee lovers along with those less keen on caffeine. There are blended frappes with flavors ranging from triple chocolate to pumpkin spice, tea and even golden milk, a healing beverage made using coconut milk, turmeric, ginger and lemongrass.

Mai is also whipping up brewed cascara, a drink made using the husk of coffee cherries. Mai’s experience working with the low-caffeine coffee byproduct stems from his 2017 launch of Arabica Soda, a bottled iced coffee alternative made using cascara.

“It takes your taste buds awhile to figure it out, but once you do, it’s so yummy and has so many health benefits,” Jen said.

When it comes to coffee, local wholesaler Springbok Coffee set up the Grossos with beans and a state of the art espresso machine that they’re using to churn out cappuccinos, maple lattes, nitro cold brews and more. Lodi also offers an assortment of baked goods from Saffron Bakery — the Grossos eventually plan to move this operation in-house, Jen said.

Matcha, a Japanese green tea powder made from finely ground dried tea leaves, is another area where Lodi Coffee shines.

“Of course matcha has so many health benefits, and ours is organic ceremonial grade, so it’s literally the highest quality you can get,” Jen said. Order the traditional matcha or get it in a latte, served hot or iced with your choice of skim, whole, coconut, almond or oat milk.

The Grossos dreams of a downtown shop are moving forward. The couple was unable to repurpose the old building at King and Huger streets, which has been a gas station, cab depot and most recently an office space. But after months of planning, they are finalizing plans for a new building that will house Lodi’s downtown shop at that location.

“Our original intent was to use that building as our drive-thru by entering one of the garage bays, however Charleston (Department of Transportation) wouldn’t approve that concept,” Jen said. “We are building on the second lot on the south side and that has been approved.”

Project architect David Thompson confirmed the building had received approval from the Charleston Board of Architectural Review on social media last week. The Grossos hope to break ground on the new location in January and expect it to be completed by July 2021.

“That location will have a walk up window and a really nice patio,” Jen said. “We’re addressing some flooding issues, and it will definitely enhance that corner.”