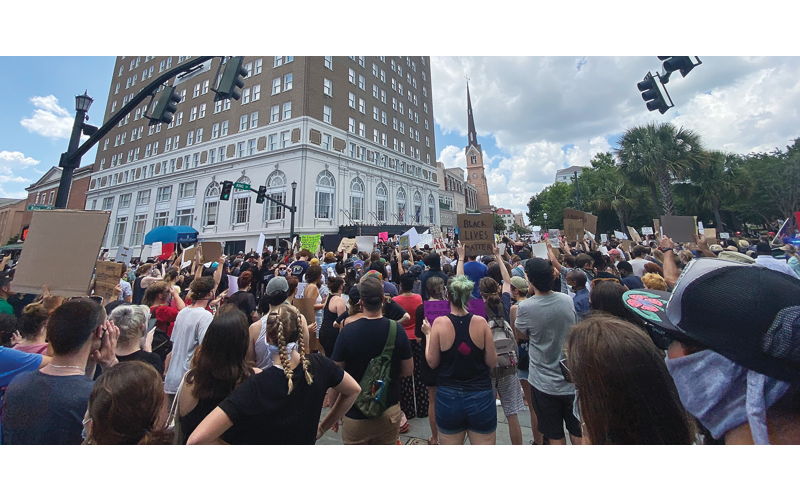 A report presented to Charleston leaders regarding the downtown protests May 30 and May 31 could figure into changes to how the city’s police force operates, once local leaders process the specifics.

The full 64-page “After Action Report,” released Oct. 8, details a timeline of events beginning May 28, with the organization and planning of the peaceful protest to take place May 30 afternoon. Councilwoman Carol Jackson was there that day, and remembers a stark difference between that afternoon and what came later.

“I had walked all the way to the Battery, and the majority of that way was with two younger women I knew through the ACLU,” Jackson said. “Policemen were stationed on the side roads just to keep the marchers moving.”

Black Lives Matter organizer Marcus McDonald remembers much the same from the daytime protests: a peaceful demonstration by those tired of seeing headlines in the media about the death of Black people at the hands of police.

“We were all angry and frustrated about what was going on,” McDonald said. “‘Here we are, yet again, dealing with this senseless violence.’ We just wanted to be a community for everybody to connect with and discuss our feelings with everyone else. I went to a peaceful protest, not to cause destruction, but to show solidarity.”

Though the night saw violence and destruction, Jackson said she believed those who were to blame were different than those she had marched with, and nobody expected it to go the way it did.

Even still, as the city’s “After Action Report” details, the mindset of all those present for further demonstration the following day had been severely altered.

“The way they had it set up the next day was just disgusting,” McDonald said. “There was one point where we were all trying to leave Marion Square on Calhoun and St. Philip [streets], but there was something like a tank there. We were in front of it, and it started playing ‘Bad Boys,’ and the next thing I knew, they had tear gassed us. That kind of militarization can’t happen again.”

The report states “the various responses to the different situations resolved them in a manner consistent with the Response to Resistance and Aggression Decision Model and resulted in no one being injured,” but details the use of chemical agents and pepper rounds being fired at protesters during daytime protests, methods Jackson called physical, but not violent.

“My definition of violence is from a personal, human being standpoint, that cops are trying to be physical when they can’t get citizens to obey verbally,” she said. “Yes, I think they were physical, but to me, violence is mal-intent.”

But, McDonald described many of the arrests made throughout the events as violent.

“The reckless arrest of people without purpose — stuff like that can’t happen again,” he said. “They would tackle people and roughhouse them, and we were just trying to protest in the park. The first time we did an 8 minutes of silence, they shot pepper bullets at us 4 minutes through.

“Over-militarized responses like that don’t serve any purpose,” McDonald said. “If anything, they further alienate the citizens from the police.”

That’s why Jackson has proposed city leaders get additional perspectives from those impacted by the protests and responses of the May 30 and May 31 protests, including those who were arrested.

“I felt like we should have some representation from the people who were peacefully protesting again on Sunday and were affronted that they were not being treated fairly in the vein of the peaceful protests they were trying to accomplish that afternoon,” she said.

Information gained from testimonials like those as well as detailed reports and research from others involved will motivate future training and changes to the way the Charleston Police Department operates.

“The report is a snapshot in time, confirmation of things and our takeaways that will be blended into our bigger picture changes to our policing strategies and training that we’ve begun,” Jackson said. “We began with the Illumination Project and have now gone into a more directive statistical performance-measured racial bias audit.”

This is a similar belief to what McDonald said was the point of the protests in the first place: to speak up against police systems that don’t work for the people they are supposed to serve and draw people’s focus to change.

“You can focus on the protest for months and months, but what we are really wanting to focus on is the change,” he said. “That’s what [community leaders] should be focusing on as well, and that goes for everyone all across the country.”

Though Jackson and other leaders have said there is “much to learn” from the events detailed in the report, she believes Charleston is at least a few steps ahead of other parts of the state.

“In states like South Carolina, that don’t want to share taxes or use taxes for more subtle purposes like community programs that would involve economic empowerment as well as mental health intervention and dealing with homelessness on a housing-first basis, there’s so much that’s missing,” Jackson said. “Charleston is better at a lot of those things than some other parts of the state. We care. That’s the message I hope to deliver through these changes.”