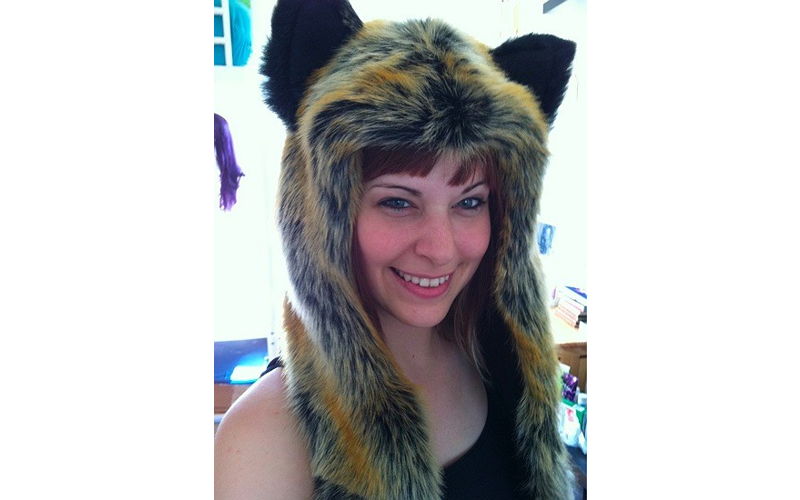 Geekdom is a sphere traditionally dominated by males — gamers, Trekkies, and comic book nerds. And while plenty of ordinary women indulge in varying degrees of fandom, they’re more likely to be represented as buxom babes in itsy bitsy vinyl costumes with an unlikely attraction to chubby dudes in glasses.

In an attempt to dispel a few myths surrounding “geek girls,” Shaun Rosado and Laura Longtine-Rosado came up with the idea to make a “Women of Geekdom” calendar. Geeks of the world, in turn, showed their approval by donating $30,000 via Kickstarter for the project.

“Being a geek girl, I go to a lot of cons, I read a lot of blogs, I see a lot of geek girl culture things out there,” Laura says. “And personally I feel that there’s not a lot of materials out there that represent that aspect of fandom. Some of the things that exist out there are more related toward geek males, and I don’t think they give the best representation of real women, real fandom, the way that real girls celebrate it.”

The idea for the calendar was hatched during a recording of one of Shaun’s podcasts; he launched his show, Shauncastic, in 2010 and now has a handful of regular contributors and hundreds of listeners worldwide. He usually discusses a variety of topics that are relevant to geeks, who, for the record, he describes as anybody who likes anything that they get really obsessive about, like Star Wars, Star Trek, or even Twilight. “It’s time for people to stop thinking of geeks as being acne-ridden fat people who live in their parents’ basement and have no social lives whatsoever,” he says.

The original concept was to feature regular female Shauncastic contributors in the calendar, including Laura, Satine Phoenix, Nicole Jekich, Dash Williams, Stormy Piazza, and Christina Janke. At that point, the Kickstarter goal was a whopping $12,000, which would go toward travel expenses for the few out-of-town participants, printing costs, hair and makeup, transportation, photography, and wardrobe (the women were tasked with designing their own costumes based on their favorite characters).

With only 10 days left in the campaign, they’d only raised around $4,000. Then Shaun added five more ladies to the lineup, a few of them quite well-known in the geek world: Sandy Bergeron, Jenna Busch, Dodger, Chloe Dystra, and Misti Dawn. With that, donations started spilling in from all over, and within a few days, they ended up with 468 individual backers with a grand total of $30,003. Pwned.

“Some people say, ‘Shaun, you’ve obviously got some really famous people there, how did you do it?’ Honestly, my superpower is I can usually get people to at least talk to me, and I just started talking to them. I just reached out and they responded,” Shaun says.

Janke, a former City Paper intern, was initially unsure about participating in the project. “I was a little dubious at first given what I’ve seen online as well as the concentrated, oftentimes creepy fan base I’ve encountered at Dragon*Con in Atlanta,” Janke says. “I joined anyway, but on one condition: No über sexy pinup where I’m only wearing bits of material that marginally looks like my character because of the color scheme. Turns out, that was the general response from everyone else.”

Laura adds, “Most people are a little nervous right now because they’re not really sure if we’re telling the truth, like, ‘Are you really going to make a real calendar that’s not objectifying?’ I can’t promise that you won’t think it’s objectifying, because everyone’s personal preference about what they see as objectification is different. But I feel like I’m trying to figure out intentionally what is going to be a good representation of what real women fans do.”

Others participants, like the pink-haired Dodger, are more down-to-earth — she vlogs about video games on YouTube while playing with her cat. And Jenna Busch is a journalist who’s written for Zap2it, Huffington Post, AOL, and Popeater.

Shaun adds, “There’s a big difference between being sexy and having a point and sex for sex’s sake. We’re not going hey, look at the sex. These are women and they are sexy. It doesn’t necessarily mean that what we’re selling is sex. We’re selling that they’re women first.”

The Rosados are currently working on securing permits around town for the photo shoots, which will take place this summer. “You’ll see girls dressed up as vikings and superheroes running around downtown Charleston one week during the summer,” Laura says. So far, planned costumes include a mermaid, Death from Neil Gaiman’s Sandman series, a pre-infested Kerrigan from StarCraft, Supergirl, She-Ra, and a few original Dungeons and Dragons characters.

“I like seeing geeks and nerds expressing their love out in the open,” Janke says. “I mean, geek is the new sexy, isn’t it? But … it’s still refreshing to see everyday folks showcasing their creativity and love for the character they chose. These people usually put more love into creating that character, whether it’s from a D&D game, video game, comic book, or whatever.”

The Rosados are hoping to raise enough money from the calendar to donate to the Wayne Foundation, which benefits domestic trafficking victims.