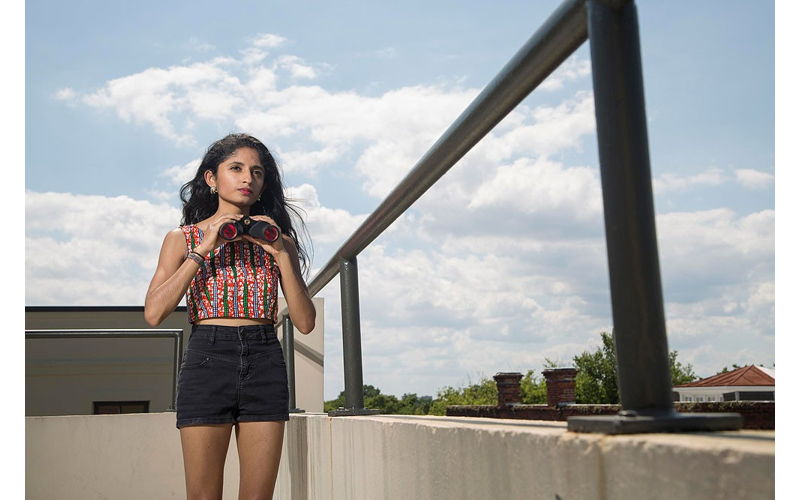 Anjali Naik’s rural South Carolina upbringing was different from that of anyone else she knew. “My dad’s from Africa and my mom’s from India, so I’m first-generation American,” she says. “So it’s always been really confusing to me where I actually am from, who I am — and that’s always the first question anyone asks me. But I never had anyone to emulate around me; I was the only Indian kid.”

Naik, whose moniker is Diaspoura, reflects on that exploration in her debut, self-released LP entitled Demonstrations, an ambient, electro dream-pop album the singer says was a liberating one to create. “It’s an affirmation to myself,” says Naik, who’s a rising College of Charleston senior. “I never felt like I had space where I could introduce my narrative to whatever was going on. So I thought, you know, I’m just going to tell my own narrative as it is, and that’s going to be my own documentation for anyone else that comes along.”

Diaspoura is an academic term Naik happened upon that seemed to perfectly represent her family’s unique path. “I got into this space when I was trying to name myself and found out about some of these Indian feminist writers,” says the Clinton, S.C. native. “I loved their stuff, and they used that word a lot, which means a migration of people. They would speak of it in reference to Indian people in California or Europe or Africa, who all originated from India but they were just on different paths of immigration. And it’s just cool because my parents made the same kind of group migration. I never really thought that I had a history, but I claim that as my history.”

Growing up, Naik trained herself to assimilate to American culture outside her house at the Christian school she attended. But then she’d come home to the teachings of Hinduism. “It was all very messy in terms of what I thought I was doing,” she says. “But I had a good understanding of what religion was, because I was doing two religions at the same time.”

Home is also where Naik was exposed to music, particularly her father’s renditions of classic Indian pop songs. “He would do old Bollywood covers and performances, and he has his own karaoke group,” she says. “He’s a great singer, so I got to grow up around that.”

But much of Naik’s inspiration to pursue music came when she moved to Charleston for college. While you can certainly point to her open-mic days at places like the now-defunct King Dusko as the source of her on-stage confidence, Naik also credits her heavy involvement with Girls Rock Charleston with helping her become the strong musician she is today. The organization has very clearly, and proudly, seeped into her identity.

Naik began as a volunteer before becoming an organizer for Girls Rock three years ago. Last year, Naik helped start a Girls Rock after-school, teen leadership program designed for predominately at-risk girls, some of whom are involved in the criminal justice system. Helping young women and trans youth to empower themselves through music and social change was as dynamic a message to the teacher as it was the student. “I owe a lot to Girls Rock, because that’s when I started taking myself seriously as a performer,” she says. “A lot of my self-sufficiency in terms of making this album comes from that.”

A year and a half in the making, Demonstrations is the singer’s eight-song journey entirely written, performed, and produced by the DIY musician in her home. Well, most of it was all Naik, save for the atmospheric electro-pop track “What They Said,” which was co-written by SUSTO’s Corey Campbell. The collection is both personal and political, with tracks like “Apology” taking on an imagined dialogue between Naik and her former yoga instructor.

“It was really interesting — every time I left class, I felt aggravated and I didn’t know why, and I’d look stuff up online trying to understand why I hated it so much,” remembers Naik, who grew up doing yoga with her mother at home and at Sunday school. “I was the only Indian girl in the class, and I guess the way my teacher would talk about yoga, he would talk about it in a really white-washed, Americanized way … people just didn’t take it seriously. The history and stuff was just not that important to people as much as stretching and getting a workout. I guess it made me feel really undervalued.”

Now that Demonstrations is complete, Naik plans to concentrate on centering herself and “actually taking myself as a musician seriously,” she says. Naik sees more collaborations in her future, but with Demonstrations, she needed to complete the very personal project solitarily. It’s one journey she can call her very own.

Demonstrations is out Fri. June 24 via digital download at diaspoura.bandcamp.com and as a blue and pink 2GB USB drive, which will contain album artwork, three unreleased, full-band live video sessions, and a zine comprising art, lyrics and personal essays on the making of the album.