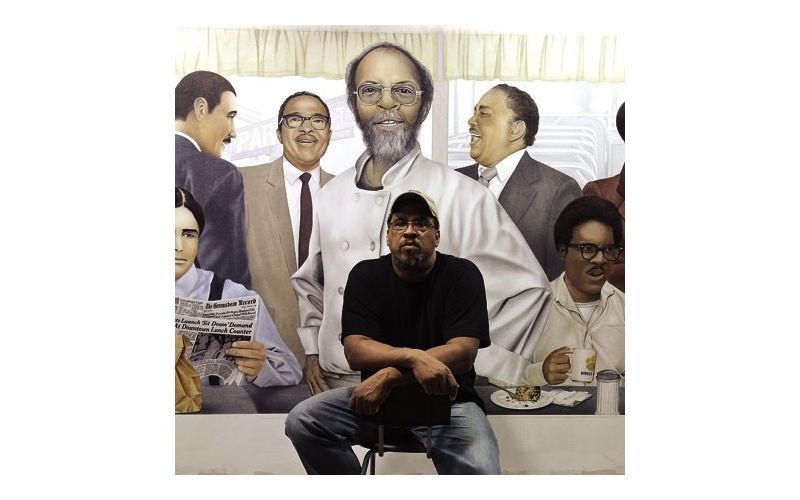 Ezell Blair, Jr., David Richmond, Joseph McNeil, and Franklin McCain took seats reserved exclusively for whites. They were supposed to stand and eat. They didn’t get served, but they were soon watched over by police who had been called by the manager. The next day, they returned with 27 other protesters. The resistance spread even further, with similar actions taking place across the South. It wasn’t the first sit-in of its kind, but it was an important link in the chain of events that led to desegregation.

That Woolworth’s lunch counter in Greensboro, N.C., recently became the International Civil Rights Center and Museum. The sit-in is the inspiration for Charleston artist Colin Quashie’s enormous new painting, “Service,” which was unveiled last week at the University of North Carolina’s School of Government at Chapel Hill in an event that coincided with the 50th anniversary of the desegregation of the Greensboro Woolworth’s.

Quashie is best known for art that questions the cross-cultural status quo. His collection includes the “O.J. Simpson Coloring & Activity Book,” with a police pursuit maze and cut-out bloody gloves; a Black American Gothic Series with Oprah remarketed as Aunt Jemima; and the hanging sculpture “Black People Love Pork Because Africa is Shaped Like a Pork Chop.” His new painting includes none of his trademark biting criticism, but its development was not without challenges.

The painting itself is a bold attempt to address an inequity at the School of Government. When the establishment was built in the 1950s, 12 large pieces of art were hung to celebrate North Carolinian history, and the series had a conspicuous absence of non-white people. In 2007, a commission was created to find new art, a modest mea culpa half a century too late. One of the selecting artists was Juan Logan, best known here for last year’s Prop Master show at the Gibbes. Logan has known Quashie for 15 years, thought he’d be a perfect fit, and added his name to the hat.

According to Associate Dean for Development Ann Simpson, out of the 13 artists who sent proposals, the field was narrowed to three, including Quashie. When he heard he was in the top three, the artist’s initial reaction was, “Oh shit, what am I going to do now?” Quashie never pursues commissions, preferring to do his own thing unhindered by corporate hand-wringing. Yet the idea of filling in this “missing history” intrigued him. The school had only one major concern about his concept — they didn’t want to see lynchings or other scenes that would cause discomfort. Quashie agreed, becoming increasingly passionate about the subject as he learned more about the Greensboro Four and their fellow North Carolinians.

“I thought I’d get bored, but the subject matter sucked me in. It was stunning what they’d done,” says Quashie of the Four and the dozens of other figures he’s included in his artwork. “It was inspiring. I feel like I’ve led a wasted life compared to the circumstances in which these people achieved what they did.”

Quashie had to make it clear to the committee that he wouldn’t be lampooning his subject. Simpson says that his contentious rep made the committee nervous. “We talked quite a bit with him about the spirit of this work,” she says, “and what we hoped it would convey. He understood that.”

The artist’s reply was direct: “I know the work you’ve seen is controversial, but I understand what this piece needs to do — show people how far we’ve come and hopefully get people interested in learning more about others who contributed to African-American history.”

That was enough to satisfy the committee., but they had another concern: Quashie’s choice of venue. Instead of hanging the painting beside the 50-year-old art in the school’s high-profile atrium, he wanted it tucked away in a first floor hallway.

“A lot of people asked about that,” says Simpson. “It’s not a well-traveled hallway at first glance.” The school didn’t want to be accused of hiding their $45,000 African-American painting off the beaten path.

“They were disappointed,” says the artist. “I had to convince them of the location.” He told them he’d “take the hit” if there was any criticism, arguing that he hadn’t chosen the space lightly. The long, white wall is perfect for his artwork, and it’s across from the dining hall where thousands of students actually have time to stop and sample his work. Plus the art is site specific — the main subjects gather at a lunch counter, interacting with each other in life-sized proportions, discussing larger-than-life matters.

The completed painting justifies Logan’s recommendation and the committee’s faith in Quashie. It’s a breathtaking reminder of the contributions African Americans have made to North Carolina’s history, from activists to teachers and businessmen, escaped slaves and abolitionists. The artist realistically depicts more than 40 notable figures with unfussy brushstrokes.

“Service” doesn’t just add to the art already at the school; it will undoubtedly get people talking. It’s a perfect example of an artist becoming enthralled by his topic and making it reach out to others in a vivid, stimulating way.