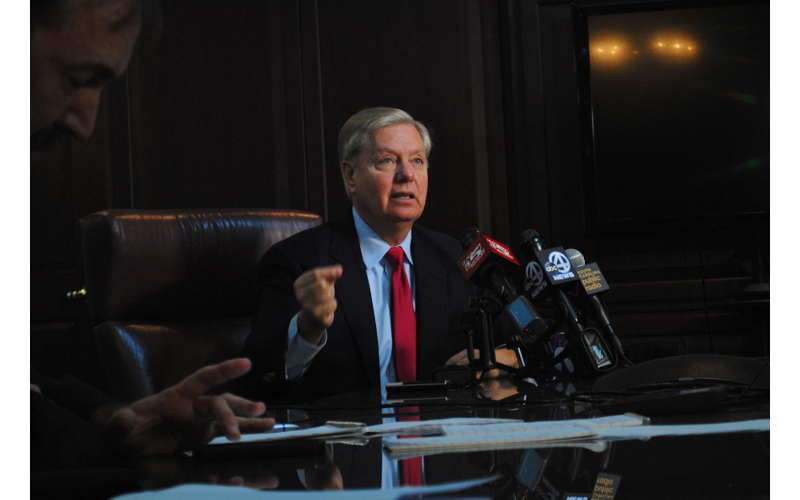 U.S. Sen. Lindsey Graham reportedly called the Georgia secretary of state twice to discuss potentially throwing out ballots cast in close elections for president and U.S. Senate that could tip the balance of power in favor of Democrats after President Donald Trump leaves the White House in January.

The Washington Post first reported Georgia Secretary of State Brad Raffensperger was receiving pressure from fellow Republicans, including from Graham, as both the state’s U.S. Senate seats appear headed to runoff elections. If Democrats are able to win one or both of the seats, Republicans would lose leverage to stop key Democratic efforts from moving through Congress.

Georgia is currently recounting nearly 5 million votes, a process election officials told The New York Times is moving ahead as planned despite the political pressure.

The Post reported that in a conversation that took place Friday, Raffensperger “was stunned that Graham appeared to suggest that he find a way to toss legally cast ballots.” The conversation reportedly centered around signature-matching procedures that Trump allies have called into question in states where the president appears to be trailing. Graham called the secretary’s characterization of their discussion “ridiculous,” telling Politico he thought the conversation was “very pleasant.”

“The main issue for me is: How do you protect the integrity of mail-in voting, and how does signature verification work?” Graham told the Post. “If he feels threatened by that conversation, he’s got a problem,” Graham said.

Graham has been among Republicans who have doubled down on support for the president since the election, casting doubt on results that showed Democrats with key wins in states nationwide.

“We win because of our ideas and we lose elections because they cheat us,” Graham said on Fox News in the week following the election.

Monday evening on CNN, Raffensperger stood by his impression that Graham was pressuring him to throw out votes that may have been cast legally, pushing back on Graham’s denial.

“It was just an implication of, ‘Look hard and see how many ballots you could throw out,'” Raffensperger told CNN’s Wolf Blitzer.

Monday night, The Wall Street Journal reported Graham actually placed a second call to Raffensperger and was joined by staff when he called back and asked about invalidating absentee ballots.

“Mr. Raffensperger and his staffers agreed not to act on any of Mr. Graham’s suggestions,” WSJ reported, quoting the secretary, saying, “We have laws in place.”