Libraries adjust to life in the digital world 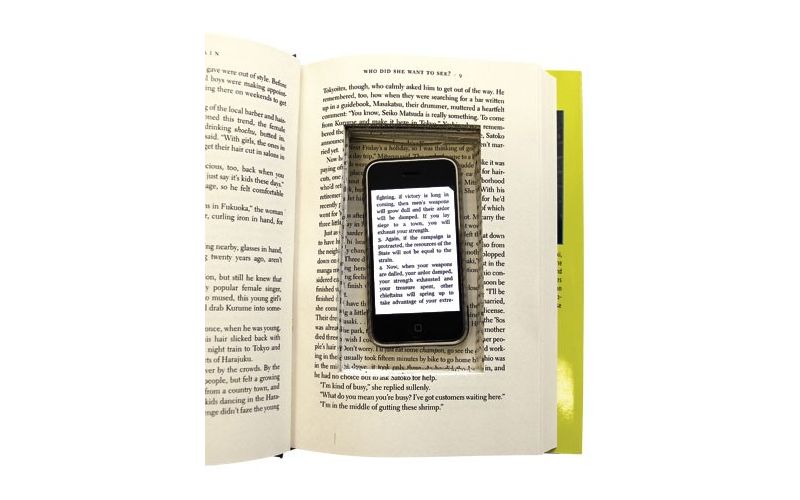 It can be difficult to imagine a future where books and libraries exist. After all, why waste paper and energy borrowing books at the library when you can download the latest releases directly to your iPad? Why join a book club when you can weigh in from the comfort of your couch? And who needs a librarian when you’ve got Google?

But modern libraries fancy themselves to be much more than brick-and-mortar book repositories — and they aren’t about to close up without a fight. Libraries across the country are struggling to remain relevant and productive in an increasingly digital society. Stanford University has decreased their engineering library by 85 percent, with the majority of books now available to students online. The D.C. Public Library offers downloadable versions of books, audiobooks, music, and videos via OverDrive. And the New York Public Library recently ran a promotion rewarding loyal patrons who check in using Foursquare — the first person to reach 25 check-ins was rewarded with NYPL schwag.

Other libraries have simply struggled to stay afloat following drastic budget cuts. In March, the Charlotte Mecklenberg Library Board of Trustees voted to close 12 branches and lay off nearly 150 employees. Eventually a compromise was reached to keep the branches open, but hours of operation and staff salaries were slashed. In Jersey City, N.J., three branches that were slated to close last week have managed to hold on a bit longer, though they’re basically on life support. A handful of ailing libraries nationwide have even turned to private firms like Library Systems & Services to help with running their operations — a hugely controversial move among library loyalists. Here in the Lowcountry, hours have been chopped and nearly 20 percent of the staff positions are vacant thanks to a budget shortfall totaling over $700,000.

Charleston County Public Library’s Executive Director Doug Henderson, who joined the organization in August, spent the last month hosting informal community meetings at all 16 branches to find out what patrons want out of their libraries.

“I’m hearing that they want larger libraries and more libraries, and we’re telling them that they’re talking to the choir,” Henderson says. “They need to get out and talk to the elected officials and explain to them what they think their priorities are and what they hope their elected officials will support. And we’ll see what happens, won’t we?”

Though hours have been reduced, usage is up in local libraries — a predictable trend in the bad economy. In the last decade, circulation has increased 94.5 percent, user visits are up 32.9 percent, and programs offered are up 74 percent. On a recent Tuesday afternoon, the Main Library on Calhoun Street was positively bustling.

Retiree Joe Bickett, 62, sat at a table reading — he visits the library three to four times a week to peruse newspapers and check out books. Andrea Umbreit, a 49-year-old grant writer, worked on her laptop in a small cubicle in the corner of the second floor. “I use this as my home office,” she said. Shandy Watson, 35, was helping one of her children pick out movies in the kid’s section while another played on the computer — their library visit is a weekly occurrence.

American College of the Building Arts student Matthew Ricchezza, 20, is the only person we spoke with who doesn’t see a future for traditional libraries. “They’ll either be nonexistent or very empty,” he said. Until then, he’ll continue visiting two to three

times a week to check out books. “They’re the only bastion of information that you can trust,” he said of libraries. “The internet’s great, but it’s iffy.”

Indeed, curating information is what libraries are intended to do.

“Libraries’ missions have not changed,” Henderson says. “Our mission has always been to get people the information they need in a timely manner, to make sure it’s credible and what they want. The only thing that’s changed is the number of devices they might be able to get it on or the forms they might get it in.”

The library now offers more than 500 downloadable audio books, and within the next month, all of the branches should offer Wi-Fi access, and they plan to double their bandwidth in the near future. Eighty-six computers are available for patrons in the Main Library alone — on the aforementioned visit, more than half were in use. In addition, the library offers free training sessions on using social media, writing resumés and cover letters, personal budgeting tools, and small business counseling — they even have a section on their website for “recession resources.” This is in addition to free children’s programs, film screenings, music events, book signings, and writing workshops.

Patrons can also find a number of resources on the library’s website (ccpl.org), including online book clubs and NextReads, a personalized weekly newsletter with book suggestions. And Library Elf is a new service that helps patrons keep up with the items they’ve checked out by receiving e-mail notices, text messages, or RSS reminders when items are due or when requested items become available. Eventually, Henderson hopes to implement self-checkout systems, which will free up librarians to do what they’re actually trained to do, which is to make sure you find what you’re looking for.

“People are able to keep track of each other and share information in a way that’s never been possible before,” Henderson says, referencing social media sites like Facebook and Twitter. “So what’s happened is, people now expect to get information immediately. What they’re not getting, and what they need libraries for, is to help determine if information that they are getting or seeing is credible.”

As we were reminded when researching this article, Google and Wikipedia aren’t the best research tools. Our library field trip led us to Theresa Wagner, a young librarian-in-training who helped us find a glut of relevant articles about the future of libraries. Wagner, who is working toward a masters degree in library science through the University of South Carolina’s distance learning program, handles much of the library’s social media outreach. She also hopes to add more young adult programs and online digital content.

A few blocks away at the College of Charleston’s Addlestone Library, librarians are facing a similar set of dilemmas, though they boast a much larger staff and budget.

“I think it’s a lot harder on public libraries, because they serve a much larger group of people than we do,” says Chris Vinson, head of library systems. “And their funding isn’t as secure as ours … It’s a lot harder for them to justify themselves, to justify getting money. They have to offer more services than we do with less money and less staff. I really am impressed by them.”

For the last two years, Vinson has been working to keep the college on the cutting edge of technology. He maintains the website, supervises the servers, and explores new technologies. In 2008, he unveiled the Lowcountry Digital Library, a searchable online database of scanned images and manuscripts. Most recently, he launched CougarCat, an application that allows students to search the card catalog with their smart phones — no scary librarians required. The “ask a librarian” IM option on the website serves a similar function.

“We’re trying to make it as easy as possible for them to contact us,” Vinson says.

Academic library patrons are undoubtedly less diverse than public libraries, but Vinson sees some parallels between the two.

“I think they use the library more as a Barnes & Noble or coffee shop now rather than the traditional idea of the library,” Vinson says. “They don’t come here to be quiet and to study. It’s almost more social to be in the library now. People just like to come here to hang out. I think [libraries are] a lot less intimidating than when I was younger. There was a time when I was afraid of libraries, and librarians for that matter.”

While Vinson thinks the use of iPads and e-books for textbooks would be “revolutionary,” he hopes that traditional books will stick around for awhile.

“I think we’re still going to have books,” he says. “Maybe that’s just a hope, but I think people still want physical libraries. People like having somewhere to be.” Henderson doesn’t think books will be phased out either, but he’s supportive of electronic devices as well.

“I don’t care what anyone uses, as long as they’re reading. The Kindle, I think, is great,” Henderson says. “The Kindle to me is a little too big and bulky to carry around, but I know a lot of people like that sort of thing.”

He even argues that video games can contribute to literacy. “I’m in favor of anything that makes people more literate so they can participate in the information age,” Henderson says.

If there’s one thing that shows the continued relevance of libraries, it’s the fact that new branches are still opening nationwide. The U.S. Department of Agriculture recently announced investments that will help build and enhance libraries in 129 rural communities across the country, including two in South Carolina, in Denmark and Richland counties. The projects are being funded by the American Recovery and Reinvestment Act, which President Obama signed into law in 2009. The main goal of the act is to jump-start the nation’s economy by saving and creating jobs and expanding educational opportunities — and libraries seem to be the perfect fit.

The library offers a lot more than toddler story hour and book clubs. Stop by your local branch to check out the wide range of free and useful programs. For more information, call (843) 805-6930. Find the full listings at ccpl.org.

Free, confidential counseling for your start-up idea or existing business from the Charleston Coastal chapter of SCORE.

Demographics Demystified at the Small Business and Nonprofit Networking Lunch

Find the local, state, and national demographics you need with tools from the U.S. Census Bureau, the Berkeley-Charleston-Dorchester Council of Governments, and the CCPL Business Center’s Online Library. Business librarian Amanda Holling will demonstrate how you can find the statistics you need with American FactFinder, the BCDCOG’s Online Mapping Tool, and DemographicsNow.

Take a Step in the Write Direction: Write Living Newspapers with Marjory Wentworth

Attendees will look at a few poems based on news and sample clippings from recent newspapers and magazines, then write poems about a subject of concern. Sponsored by the Friends of the Library, Lowcountry Initiative for the Literary Arts, and the Charleston County Public Library.

Job seekers can learn to make a good first impression with a cover letter or resumé. Kathy Kleibacker will be in the reference area to offer one-on-one editing help.

Stop by if you have computer questions or need help creating documents. This computer class is made possible by a Library Services and Technology Act grant from the Institute of Museum and Library Services administered by the South Carolina State Library.

Explore the fundamentals of HTML. Practice entering source code for a web page that includes hyperlinks, a table, and a photograph. Completion of Internet Basics (or previous experience) is expected.

A Wii Bit of Fun!

On the last Saturday of every month, stop by to play Wii games like bowling, tennis, and more. Ages 6-12.