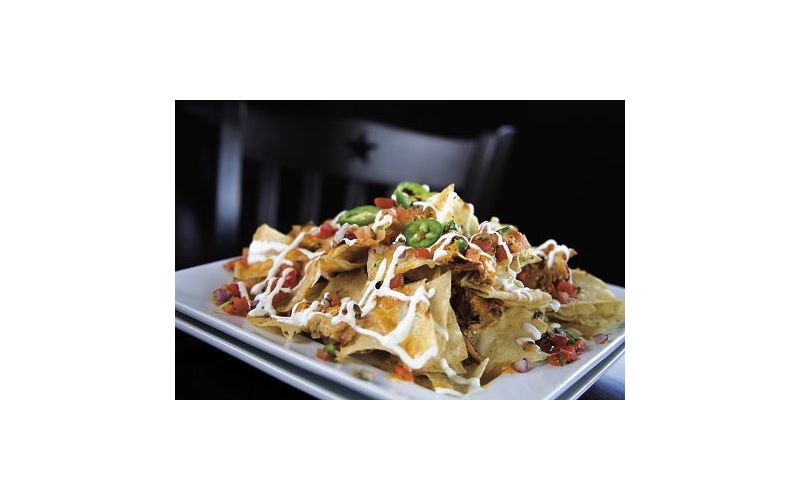 For some time now I’ve been noting the surprising number of bars around town that are taking their menu up a few notches and serving ambitious, high-quality food. The recently opened Liberty Taproom shows that the trend is moving into the family dining market, too.

Liberty Taproom is the newest of the 16 restaurants owned by the TBonz Restaurant Group. For those of you who remember the old TBonz that formerly occupied the building, Liberty Taproom has the same basic shape but has been completely overhauled. After being closed more than a year, it reopened back in June with a new name, a new look, and a totally new menu.

The TBonz Group took its time on the renovations but went all out, and the result is a really beautiful room. The ceilings are high and vaulting, and there’s tons of polished, dark brown wood everywhere. The restaurant has been extended outward over the space where the old deck used to be, creating a huge bar area with big doors that open to the outside. This expansiveness — along with the huge selection of more than 30 top-quality beers on tap which gives the restaurant its name — seems likely to guarantee a brisk happy hour business.

The Liberty Taproom is the kind of restaurant run by an “operating group” that uses terms like “high volume concept” without the slightest hint of irony. In this particular concept, they lay on an All-American stars-and-stripes shtick with a heavy hand. Emblazoned across the back wall in big calligraphy is part of the inscription from the Statue of Liberty (the “Give me your tired, your poor, your huddled masses yearning to be free . . .” part). In one corner, perched atop a blue and green globe, is a massive carved wooden eagle that would make Stephen Colbert proud. The menu features “All American” spaghetti and meatballs ($10.95) and the “Freedom Burger” ($8.95), which I guess refers to the fact that we are all perfectly free to order a burger with bacon, a fried egg, and onion straws on top.

But, if you can look past a few hokey thematic details like these, Liberty Taproom is actually a stylish restaurant that serves some really good food.

The menu self-consciously comprises American classics, with a geographical reach from the coast of Maine with a New England lobster roll ($13.95) to the Hawaiian chopped salad ($9.95). The salad menu includes an iceberg wedge with applewood bacon ($4.95) and the century-old warhorse Crab Louis ($10.95). Something just warms my heart about a restaurant that serves Crab Louis.

The Liberty Big City Nachos ($7.95) are made from thick, fresh tortilla chips; jalapeño slices that are fresh, not pickled; real diced cilantro leaves; and a slightly-spicy roasted chicken. They’re really good nachos, and they are representative of the general pattern at Liberty Taproom: they start with a very standard, unrisky selection of American, line-cooking restaurant fare but take the trouble to make it better than average, using lots of fresh ingredients and making any number of things in house that your typical restaurant would just order from a distributor.

Take their hamburgers. Anyone can make a burger, but Liberty goes above and beyond. The beef is ground in-house, which results in a chewy, delicious patty, and Liberty serves it on their own house-made brioche buns, too — soft, smooth-topped creations with no seeds that are the perfect platforms for the All-American sandwich. There are five to choose from, ranging from the no-frills classic with American cheese ($6.95) to the Taproom Burger ($8.95) with caramelized onions and Clemson blue cheese. As is only appropriate, all are served with fresh, handcut fries, too.

The Edisto fried shrimp ($15.95) are also really good. There are a dozen fat, butterflied shrimp fried up in a crispy batter. They come with a side of corn fritters made from a light white batter studded with corn and red pepper, and the golden brown exterior is dusted with a little powdered sugar, which makes for a nice twist. Liberty’s pizzas have a thin, crispy handmade crust and come in three varieties: a Marguerite ($9.95) with tomatoes, basil, and fresh mozzarella, a barbecue chicken ($9.95); and the Taproom pizza with house-ground beef, pepperoni, mushrooms, and peppers.

You would be remiss if you were running an All-American restaurant and didn’t serve some sort of barbecue, and Liberty represents that genre with their Mojo wood-fired chicken and barbecue ribs (chicken $11.95, full rack of ribs $17.95, and rib and chicken combo $16.95). It’s certainly not in the league of the guys who burn real hickory logs and cook on an old-fashioned pit, but for a sit-down family restaurant, it’s passable barbecue — slightly smoky with a decent sweet red barbecue sauce that is of the Anywhere, USA variety.

Not all the details are perfect. The chicken and rib combo is served with a ramekin of very sweet, citrusy sauce that doesn’t really go with it, and the accompanying blue cheese coleslaw is a big letdown. It’s your standard blend of shredded green cabbage with a little accent of carrot and purple cabbage with a bland creamy dressing whose blue cheese flavor is much too muted and could use some sort of boost.

But, that’s more than made up for by Liberty’s oyster selection. There’s an entire wing (the section off to the right of the front door that used to be the Kaminsky’s dessert area) that tacks on a classic American oyster bar, stealing a few pages from the menu of Liberty’s sister restaurant Pearlz Oyster Bar, including peel n’ eat shrimp (half a pound for $9.95), tuna tartare ($9.95), and Pearlz’ oyster shooters ($3.50) with Absolut Peppar vodka and cocktail sauce. The rotating selection include the requisite Gulf oysters, plus a variety of more far-ranging choices, like Salt Aires from Prince Edward Island, Quonset Points from Rhode Island, and Blue Points from Connecticut. A sampler of a dozen runs $19.95, and Liberty takes the classy route for presentation. The half-shells are served on a bed of crushed ice in a round, stainless steel tray with two silver ramekins of cocktail and mignonette sauce, plus a white bowl of crackers and a couple of bottles of hot sauce on the side.

The Liberty Taproom is a very big restaurant (it even has a second floor dining area that can be used for overflow), and a high-volume operation like that can be expensive to keep going. But, with the focus on making things fresh and a little bit better than they have to be, it’s an encouraging sign. The oyster bar and impressive tap list seem likely to draw a strong bar crowd, but at the same time, it’s a comfortable place to take the whole family. With the good-but-not-too-edgy menu, both the unadventurous eater and the good-food lover will find something they will like. And that’s liberating.