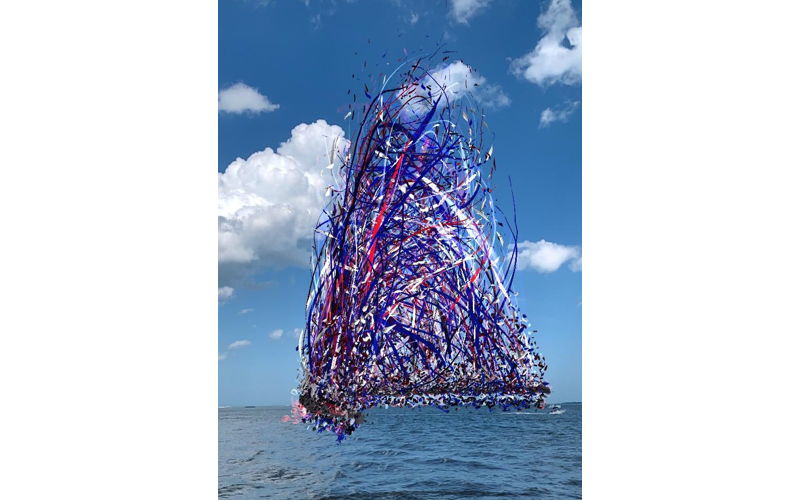 Like many symbols of the American Revolution, the Liberty Bell is a symbol of independence and civilian freedom in the United States.

The cracked Liberty Bell on display in Philadelphia reflects a larger truth: that freedom remains distorted and inconsistent in our country to this day.

The imagery of the cracked Liberty Bell inspired Nancy Baker Baker Cahill’s project, “Liberty Bell,” currently on display in Charleston through July 2021. You can find “Liberty Bell” at the Battery, near White Point Garden and facing Fort Sumter.

“From its origins in American history, ‘liberty’ was only available to a certain demographic and came at great expense to others,” Baker Cahill said. “You can’t have a conversation about freedom and not talk about the history of slavery and inequality in the United States. A bell can be a warning or a celebration; something spiritual or a wordless means of communication. In an age of pandemic, surveillance, injustice and disinformation, who is actually free? That’s the conversation we need to have.”

“Liberty Bell” is an augmented reality (AR) project that can be viewed through a phone app called 4th Wall. The AR drawing appears as an animated 3-D piece.

Baker Cahill partnered with the Art Production Fund, a national nonprofit that commissions “ambitious” public art projects for the concept.

Locally, Baker Cahill partnered with the Center for Heirs Property Preservation to present the work. The image of “Liberty Bell” features entangled ribbons that are red, white and blue. Baker Cahill said that while she came up with the idea for “Liberty Bell,” she also collaborated with AR techs to make the imagery and sound come to life for viewers to experience.

You can visit “Liberty Bell” now through July 2021.

While Baker Baker Cahill prefers the viewer to experience “Liberty Bell” in person, she briefly spoke about the detail on the inner workings of the project, in particular, the bell sounds the viewer experiences. Each bell sound denotes collected history from different parts of the world.

You can find Baker Cahill’s “Liberty Bell”  in several cities known for historical relevance in the United States, including Boston, Philadelphia and Washington, D.C. Many of America’s first enslaved Africans were forced into the country through Charleston’s slave ports, making the Battery and the Charleston Harbor a relevant place to view “Liberty Bell.”

Baker Cahill said it is best to encounter the artwork closest to the fence directly in front of the Confederate Defenders statue at White Point Garden. The artwork is cleverly placed in front of the statue, where Confederate flag supporters meet every Sunday. The program adjusts to the position of the sun, so you should still be able to view the work even on cloudy days.

Baker Cahill emphasized her choice in positioning the design toward Fort Sumter, where the Civil War began.

When we checked out “Liberty Bell,” we noticed how the bell sounds seem to be connected effortlessly with nature. Baker Cahill said the intertwining of the ribbons resembles our connections with each other as individuals in this country. In the artwork, each ribbon sporadically rose and fell on its own, showing a symbolic dissonance between people. There is a sound similar to static disturbance when viewing the artwork that creates the illusion of turbulence — embodying bell’s crack.

As for Baker Cahill’s upcoming projects? “I’m open to collaborating with art that stands for a meaning,” she said. She also reiterated that she “doesn’t have all the answers and doesn’t pretend to.” In the journey toward fixing the country’s race relations and environmental issues, Baker Cahill stated she is open to listening and learning how she can make a change and help where she can.

Visit Baker Cahill’s website at 4thwallapp.org and follow 4thwallapp on Twitter to keep up with any new projects. Liberty Bell is commissioned by Art Production Fund, in partnership with 7G Foundation and the Jamaica Bay-Rockaway Parks Conservancy.