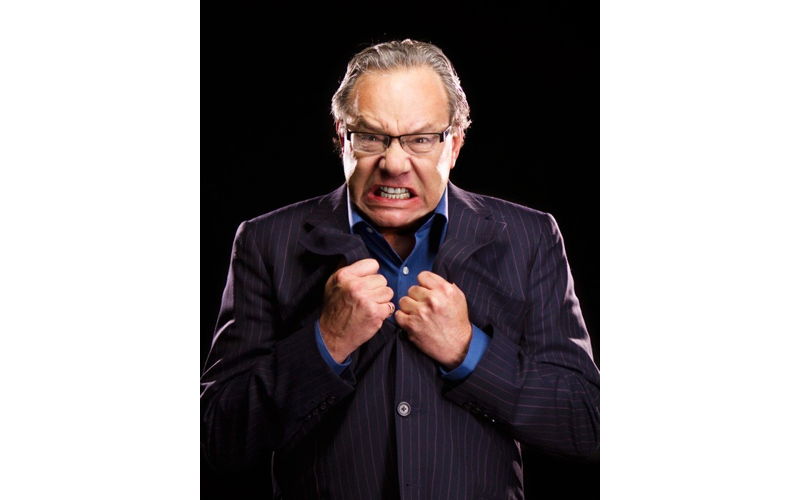 If you get comedian Lewis Black started on the current presidential race or the state of cable news, be prepared: He’ll grumble in his growly tone for more than a few minutes. As the happiest curmudgeon on the national comedy scene, the profanity-laden rants and meandering commentaries come naturally.

The ups and downs of the presidential primary season are just a few of the issues Black weaves into his stand-up set on his In God We Rust tour, which kicked off nearly two years ago.

“The deal is that it should be that it’s the Running on Empty Tour, but we’re fucking running behind on the publicity, which is partly my fault,” Black says.

The title is derived from Black’s upcoming TV special In God We Rust, due in March on Epix, a new movie channel venture from Viacom, Paramount, MGM Studios, and Lionsgate.

In God We Rust follows the religious themes of Black’s two best-selling books, Nothing Sacred (2005) and Me of Little Faith (2008). Both books addressed the meeting of religious ideas and U.S. politics as it reached a new crescendo.

“Me of Little Faith was kind of just my way of dealing with it, but In God We Rust came from the fact that the dollar bill has ‘In God We Trust’ on it,” Black says. “And it’s not that God is rusting — we’re the ones who are rusting. The flip side of that is that if we really trusted God, we wouldn’t be acting like such assholes.”

As Black’s biggest fans know, there’s an element of optimism and silliness behind much of his animated anger, some of which might be aimed at the local audience this week.

“I’ll give South Carolina shit about Newt’s win and that governor who snuck down to Argentina, among other things. If you travel enough, like I do, you realize that it’s a collection of 50 states and they’re all so different. You learn something at every stop. I’ve learned that you guys seem to get more inflamed about stuff than a lot of other states. You get your dander up faster. Maybe it’s the humidity and the heat.”

Longtime viewers of Comedy Central’s The Daily Show with Jon Stewart see Black’s style in every “Back in Black” commentary segment, one of the show’s most popular recurring features. The segment started running in 1996 and continues today.

“All of that Daily Show stuff is great, and I’m so grateful to be able to do it,” Black says. “I love it. It’s a pleasure. Secretly, in some ways, I wish it was my show. Jon’s so great at it, though, and I couldn’t make it any better, even if I was focused.”

In recent years, Black has enjoyed using his comedic skills in a variety of roles, from television and film to theater and books. But he still prefers to deliver his observational comedy on stage in front of audiences.

“The only thing that really keeps me excited is doing stand-up,” Black says. “There doesn’t seem to be a TV show in the works. I did two that were rejected. And I don’t want to be in that position of doing some form of recapping the news on TV like I do on the road. This is what I enjoy doing. If I did something else on TV, I’d rather it be something else entirely that feeds into what I do on the road. I’m not that excited about a 24-7 job, staring at a pile of shit.”