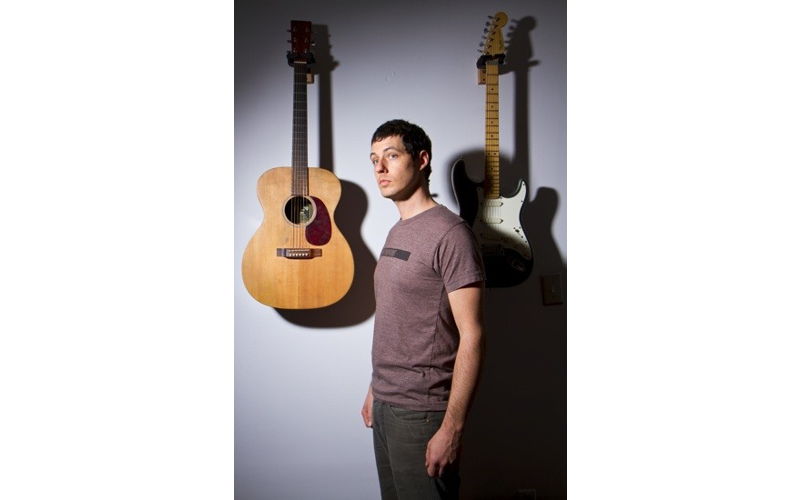 Charleston guitarist Lee Barbour is a man often misunderstood — a musician’s musician erroneously labelled as simply a jazz artist. Sure, he’s played for years in combos like the Gradual Lean and Caravan, but once you absorb the many moods and expressions of Barbour’s new solo collection nonfiction, you realize his penchant for experimentation and genre-bending innovation.

“These songs are the story of nearly a decade of my life, a non-verbalized story that is true, not fiction,” Barbour says. “It will be a while before I listen to this for pleasure. I put many hours of the most critical listening I’m capable of into this so that everyone else can enjoy it.”

He describes the making of nonfiction as “long and painstaking” — adding that local audio engineer Majeed Fick worked patiently with him at Asheville’s Sound Temple Studios along the way.

“The more involved the process of making this album became, and the more time it took, it became a major part of my whole life, not just my musical life,” Barbour says. “A couple of these songs were composed eight years ago. The journey they took to sound the way they do is inextricably linked to the different choices I made during those years.”

The initial recording sessions got off to a quick start, but Barbour wasn’t happy with the overall sounds. Looking back, he felt they rushed things. “We recorded all nine songs in two half-day sessions,” he says “That’s fine for a traditional jazz album, but I thought these songs deserved more. They sounded more cinematic in my head.”

Barbour earned his bachelor of arts degree in jazz performance from USC. After settling in Charleston in 2001, he taught guitar and performed frequently around town in various jazz, Americana, and experimental groups.

Barbour began recording tracks for nonfiction nearly two years ago. The nine-song collection is his first studio release as a bandleader. The set includes eight original compositions and one cover (“Only Shallow” by My Bloody Valentine).

“I used the studio as an instrument instead of just documenting a particular performance,” Barbour says. “With nonfiction, I achieved the live feel of everyone playing together in a room, then used the studio for additional sounds and textures.”

The most spaced-out tunes, like the slow-burning “Blues for America” and the delicate and breezy “Guinevere,” capture the spacious sonic quality of the studio. The comparatively frantic and complex tracks, like the nervous-energy romper “Wolf Blitzer” and the aggressive, King Crimson-esque “Ape Naked,” seem tighter and more direct.

Barbour wrote some of the pieces while working as a jazz guitar professor at the College of Charleston. He came up with others while on the road with Cary Ann Hearst a few years ago and during a recent stint living in New York City.

There are two or three “full band” personalities at work on nonfiction. The local musicians comprised half of the songs, while the guest combo comprised the rest. Ultimately, Barbour aimed for a fluid dynamic, and the final track listing came together rather easily.

“The order was certainly considered,” he says. “I was going for a continuous ‘album feel,’ so the overall sound was stronger than just the individual songs.”

Elements of classic rock, modern jazz, and vintage funk are detectable on much of the album, but hints of heavy prog rock, drum ‘n’ bass, and international flavor the music, too.Seeing no need to categorize, Barbour simply refers to the collection as indie jazz. “It contains so many different genre elements that calling it jazz-rock, funk-jazz, or fusion is no longer accurate,” he says. “I also like ‘avant-jam’ because it explores the outer realms of the improvisatory nature of jam band music with less egotistic noodling.”

Barbour’s combo of Ellis, Gregory, Holwegner, and Wiltrout will headline the the CD release show at the Pour House.

“I hope folks will hear my evolution from a young jazz player to a more mature composer, improviser, and producer,” he says. “I think they’ll hear I’m capable of focusing my wide range of influences into a cohesive artistic statement.”