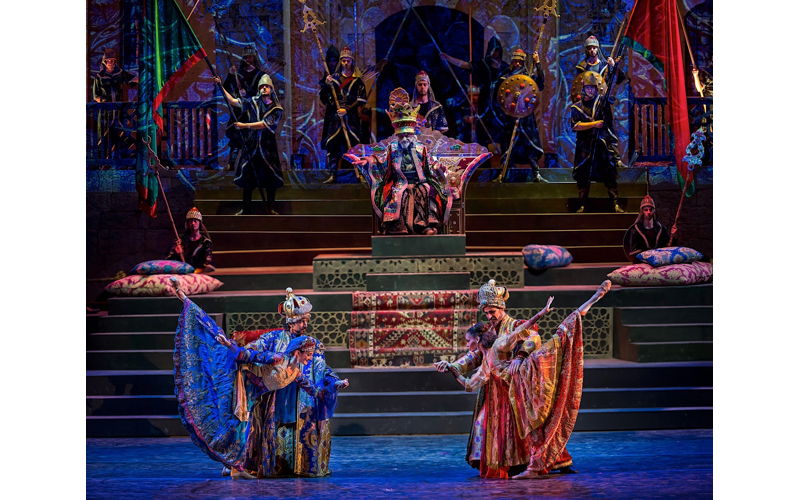 Dance of the Desert

“When people in the streets were shooting because they were from different religions, Caracalla had people from all different religions,” recalls Ivan Caracalla, the company’s director and the son of founder Abdul Halim Caracalla. “The dancers were allowed to cross frontiers and borders that nobody else was allowed to cross, because this company never had a political identity. It always carried a banner of culture and tradition and heritage.”

The company’s small studio in Beirut, built mostly of glass and mirrors, was shattered time after time during the bombardments. Each time, the dancers would immediately begin rebuilding.

“They believed in the message,” recalls Ivan. “And as they continued to perform outside of the country, they were able to portray a civilized message from Lebanon, that despite what people were seeing on the news, something beautiful could survive here.”

Pioneers of dance
in the Middle East

Ivan credits his father with helping dance become accepted as a cultural institution across the Middle East. “Before Caracalla, dance was looked upon as entertainment, a belly dance or cabaret. He was able to introduce Western disciplines to the identity of Lebanon. It’s truly East meets West.”

One Thousand and One Nights‘ three performances in Charleston mark both the United States debut of the production, and a high point of the company’s 50th anniversary celebration. Abdul Halim still serves as artistic director, while Ivan directs and his sister, Alissar, choreographs. The company’s last U.S. performance was in 2011, at the Kennedy Center in Washington, D.C.

“We’ve been talking about and preparing for these performances in Charleston for two years,” says Ivan. Sixty people, including 40 dancers, actors, and singers, will make the trip, as well as a shipping container packed with colorful silk costumes and backdrops, plus a touring set constructed in Italy. Abdul Halim still selects the costumes from his sprawling Beirut warehouse, which he keeps stocked through constant travel throughout the Middle East.

“Stepping into his warehouse is like entering the cave of Ali Baba,” Ivan exclaims. “There are all these different materials hanging from every shelf, every trunk. He lives for that, it’s his passion.”

When Ivan was 14, he accompanied his father on a trip to the southern desert of Algeria, where they lived in a tent as his father researched the music, clothing, and culture of the nomadic Tuareg people in the Sahara Desert. Translating different cultures’ wedding and celebration customs into choreographed dance became an obsession for Abdul Halim, and one that both of his children have inherited.

The elder Caracalla discovered dance as a child through an international arts festival in his hometown of Baalbek, sneaking peeks from the rocks overlooking the stage set in Roman ruins. He traveled to London to study under Martha Graham, before returning home to found his company that melds modern dance, traditional ballet, and Middle Eastern traditions. His “Caracalla Dance Style” is recognized as a distinct discipline.

A unique retelling
of classic tales

Merging East and West is still the theater’s hallmark, including in the music heard in One Thousand and One Nights (prerecorded for U.S. performances, since the 70-piece orchestra requires many instruments not common in the states).

Each of the balletic trilogy’s parts is drawn from the enduring Arabic folktales. Rimsky-Korsakov’s Scheherazade sets the musical tone for the first act, which takes place in the royal palace of Arabia. The second act shifts to the bazaar and Ravel’s Bolero, a musical suite reimagined through instruments like the sitar and the Persian Tar (a guitar-like instrument from Iran).

“We re-orchestrated the whole score to oriental instruments, in addition to the full Western orchestra,” Ivan explains. “It brings a very different flavor that complements the feel of a bazaar’s ribbons, aromas, and colors.”

The third act takes place in a caravan, where people from all walks come together through hardship and humanity, says Ivan. “The caravan is a place of encounter, where people share songs and dance and brag about their adventures.” This act is accompanied by an original score written by Abdul Halim, that’s a “more traditional and a little more Arabic,” Ivan explains. Yet, for the U.S. debut, which is accompanied by an English narrator who takes the stage five times during the performance to set the scene, Caracalla incorporated a tribute to the United States’ melting pot culture into the caravan scenes.

That addition was inspired by Ivan’s visit to the U.S. for Spoleto Festival USA in 2018, in preparation for this year’s debut.

“Spoleto is the festival of two worlds, and I understand why Charleston was chosen to be the host. It’s wonderful how intimate this city is,” says Ivan. “I felt a certain pride in the people who live in Charleston to be hosting this festival. As a person who works in the performing arts, you feel as if you are in a city that you belong to.”

Ivan sees Charleston and the United States as a “piece of the mosaic” that comes together to shape a Caracalla Dance Theatre performance.

“We are vibrant — it’s the energy of this company that makes it so attractive to watch,” he explains. “There are many different colors that come together.”

“One Thousand and One Nights” is filled with multicolored, mesmerizing moments

I’ve had the pleasure of seeing the Bill T. Jones/Arnie Zane Company perform before, and as a dance lover, I knew I’d be in for a treat. But the opening night of Jones and company’s three-episode Spoleto run (repeated in its entirety on Sat. June 1) was something more. Much more. It was perhaps one […]