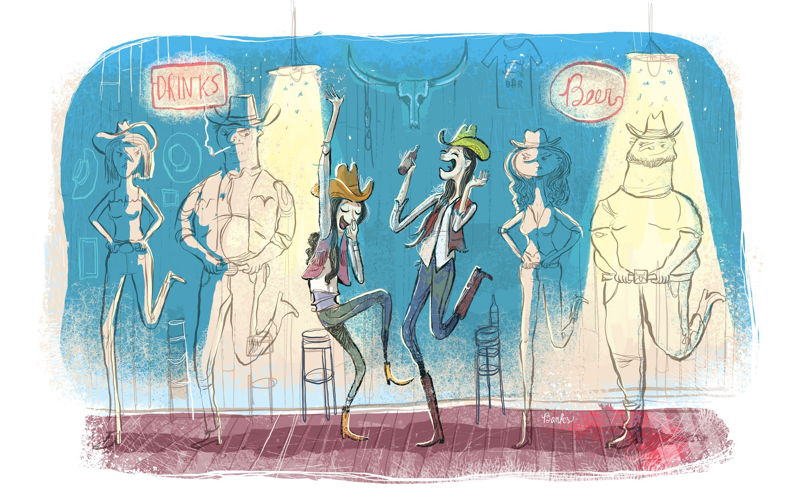 The moment I entered into the dimly lit Honkytonk Saloon situated right off of I-26, exit 203 to Ladson, it was all Bud Light wishes and rhinestone dreams. I could feel the beer chasing my blues away, the whiskey drowning my worries … I knew I’d be okay. I thought to myself, grinning ear to ear, “Damn, those were some good directions.”

My sister and I first visited the country western bar on a Saturday night. It was still early, around 7 p.m., and the free hour of couple’s dance instruction was just getting started. With our fiances preferring the bar scene to the dancefloor, my sister and I partnered up with about four other couples, ’cause some days, you just gotta dance.

Two cocktails deep (this uncoordinated cowgirl needs to pregame a little to boot scoot boogie, OK?), I clutched my sister’s hand as she attempted to lead “one and two and three and four.” I looked around. We were the only couple facing the same direction in which we started. I wondered if we’d even moved.

“OK just pay attention,” I urged my sister; she nodded emphatically, sipping her vodka soda until the ice started to clink. It was only every other memory that I had of my sister chugging a rail vodka in a bar that led me to believe we were probably not going to master the West Coast Swing that night.

The instructor moved across the floor like a landslide — like one bourbon, one shot, and one beer — like a lifted F-150 on a red dirt road. You get the idea. She was a pro. She smiled patiently at our scuffling feet and swung the other dancers around the shiny wooden floor as the band from Nashville started to set up in the background. I ordered another vodka.

A week later and finally recovered from my honktonky hangover, I visited the bar on a Wednesday afternoon to chat with managers Bob Shipley and Shelly Shattuck and some bar flies. Over a shot of Jack Daniels Honey — well, two, split three ways, it was 4 p.m. after all — regulars Anthony Daubs and a man who called himself Rusty Shackelford informed me that people don’t come here for “that IPA scene.” My vodka/Bud Light/maybe some bourbon? hangover could attest to that — usually I’m a slow, steady saison sipper on a Saturday night.

“That’s out where you are, and that’s if you want to go back and relax,” say “Shackelford.” “They’re so heavy. The point here is the environment.” The single Daubs, who is here after work most days, says a Friday or Saturday evening brings out a lot of other singles. We didn’t ask him his success rate with pick-up lines, but he seemed amicable. Hell, everyone there was friendly. And not in that cheeseball saccharine, “oh let me try to sell you on this place” bullshit.They were just genuinely having a good time.

And why wouldn’t you? Even for a creature of habit who prefers clutching a crowler in a taproom to dancing on a bar, Honkytonk brought out the “Shit damn I wanna stay all night” in me. And for this 20-something homebody, that’s about as often as a cold day in July.

Even if staying into the wee hours on the weekend with, according to a security guard, anywhere from 500-700 other patrons (the place is HUGE), jamming to live country music and watching the servers hop on the bar for a coordinated dance (y’all seen Coyote Ugly?) isn’t your bottle of domestic beer. Honkytonk does it all.

“Tuesdays are open mic night, and we do a paint night for $10 on the second Tuesday of every month,” explains Shattuck. “Some Wednesdays are bike nights, with money going to a local children’s charity, some are truck/jeep nights with money going to a local PTSD foundation. Thursdays are ladies night — a lot of female regulars like to come and learn (for free) the dance the servers do on the bar. Fridays are line dancing and a DJ. Saturday is couple’s dance instruction and a live band and then a DJ later in the night. We’ve had a hypnotist, we’ve done comedy. We just started a jazz night.”

And then there’s the mechanical bull, which, “Shackelford” says you can “pay something like $5 and ride all night,” the pool tables, the laughably good happy hour prices.

“Country is hot right now,” says Shipley. “We are primarily a honky tonk, [people come here to] eat good food, drink a cold beer, dance to good music, and get great service. At the end of the day that’s what we’re about.” The spacious Honkytonk building, situated on an even larger parking lot, has changed hands quite a few times over the years. To solidify the identity of the less than two-year-old concept, Shipley knew the name was everything. “That’s why we came up with Honkytonk Saloon, we thought that said it all. There’s no doubt about what it is.”

It’s a country bar, it’s an after-work happy hour destination, it’s a hub for large, charitable events. It’s a meeting place for singles who want to dance all night, for families who come early for the barbecue, for the 85-year-old regular who, Shattuck says, closes the bar every Friday and Saturday night. It’s for a large demographic — races, genders, ages — driving in from Ridgeville, Mt. Pleasant, Johns Island, Summerville. It’s for those who stay ’til the ugly lights come on, for the cowboy who wants to prove he can ride that bull for 30 seconds. It’s as Shipley says, “the most fun you can have with your boots on.” And for this small town girl, it’s one helluva Saturday night.