Kyle Barnette of What If? Productions makes a lifelong dream come true 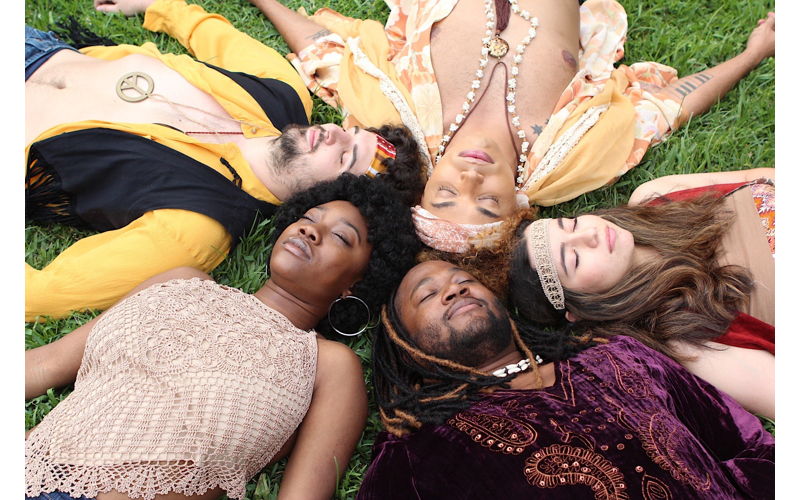 A New Head of Hair

Kyle Barnette is not, as a rule, a “musical guy.” The actor, director, and co-founder of the What If? Productions theater company enjoys straight-ahead theater more than the typical song-packed Broadway-style extravaganza.

But he’s always loved Hair, the Tony Award-winning 1967 musical that tells the story of a group of politically active, long-haired hippies in the Age of Aquarius, living the bohemian life in New York City and fighting against being drafted into the Vietnam War. Or as it’s better known, the musical that launched huge hits like “Aquarius/Let The Sunshine In” by The 5th Dimension, “Hair” by The Cowsills and “Good Morning, Starshine,” by Oliver, among others.

“I was peripherally aware of it because my mom and dad played the music from it when I was growing up,” Barnette says. “Being a little theater kid, I did some research into it to see where all of these great songs came from. And then I saw my first production of it when I was 14 or 15-years-old, and it had a very specific impact on me.”

Barnette loved both the unusual style of storytelling in the musical and its ideas about standing up for one’s convictions and fighting for freedom of expression.

“I loved the way it told a story,” he says. “I loved the non-linear style of the show, and the message about using your voice to stand up for what you believe in. It just had a very strong impact on me, in terms of how it’s structured and uses all of the music to tell a story. So when I saw it, I realized that I really wanted to be in that show.”

And in fact, years later, Barnette would appear as one of the lead actors in Hair, at what seemed at first to be the worst possible time.

“It opened literally days after the 9/11 attacks,” he says. “And we wondered if doing a sort of anti-government show was the right thing to do after such a horrific national disaster.”

The company need not have worried; the show was received far better than they expected.

“It was the right show at the right time,” Barnette says. “It turned out to be cathartic for the audience and the actors in the show, because it was a message of hope for the future. And that’s the message it continues to have 50 years later. It’s just as relevant now as it was 50 years ago.”

Barnette has carried the musical’s messages with him for years, and he’s long been looking for a way to create his own production of Hair.

“Once I started my own company, this was a show I wanted the challenge of mounting in my own way,” he says. “We’ve been planning it at What If? for years, but based on the scale and the budget it kept falling off of our list.”

When What If?’s season nine schedule rolled around, however, they had a new venue to perform in, the Queen Street Playhouse, that opened itself up to a show the size of Hair, which has a cast of 18 people.

“It finally felt like the right time to do it,” he says. “The show is 80 percent music and the cast is all onstage for most of the show, and it’s also a show that we would assume would draw a bigger audience.”

As he began casting and rehearsing Hair for its debut at the Queen Street Playhouse, Barnette sought the same level of multi-culturalism in his own cast that the original production espoused.

“You’ve gotta have the right actors and you have to have a diverse cast,” he says, “because a lot of the show is about diversity and acceptance. We related the similarities of the Millennials of this generation to the hippies of the late ’60s, because we felt the voice was similar even if they express themselves in different ways. They celebrate diversity and sexuality, and representation. So to be able to have such a representational cast is really fantastic. There are so many parts of the show that are geared towards celebratory aspects of race and sexuality and political differences. Shows like that have a cultural impact and make us able to be more accepting now.”

Perhaps feeling that he’s making Hair sound a little too much like a socially important drama-with-a-capital-D, Barnette hastens to add one thing.

“At the end of the day, it’s fun,” he says. “It’s entertainment. It has a wonderful collection of songs that became cultural milestones, and people will recognize those. It’s a fun show, and we’re entertainers, and that’s why people will want to come to the show. And if you get a social message or learn something, that’s a bonus.”

REVIEW: What If? lets the sunshine in with latest production of Hair