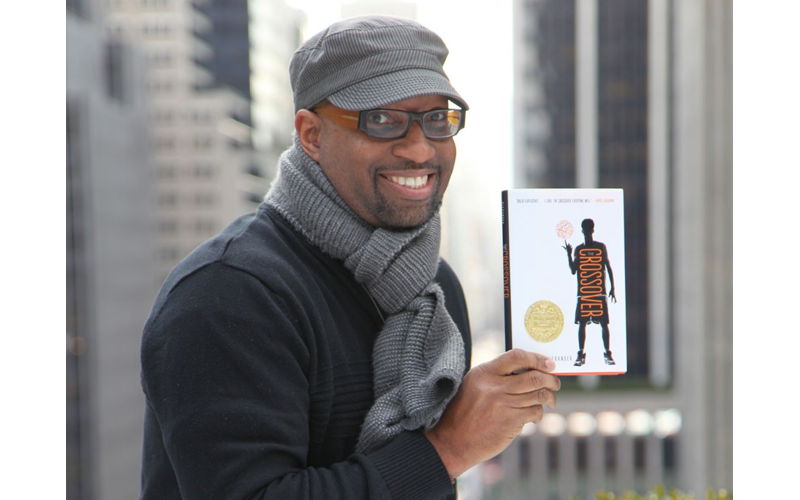 You can read Kwame Alexander’s YA novel The Crossover on your phone in one day. We told Alexander this when we first spoke with him for our interview and he laughed, “Well, that’s good to know.”

The Crossover, winner of the 2015 John Newberry Medal, is accessible in more ways than one (and really, it’s a finger-flipper even if you aren’t an avid screen-reader). The Crossover is told from the first-person perspective of Josh Bell, an eighth-grade standout basketball player following in his dad’s footsteps. Josh has an identical twin, Jordan, who is just as good at basketball as Josh is, which is probably because their father played professionally in Europe back in the day.

Alexander says he specifically wrote about basketball so that kids, especially boys, would be interested in picking up the book. The Crossover is written entirely in free verse poetry. That may sound like a turnoff to young male readers, but it actually lends itself both to the rhythm of basketball and to the rambling thoughts of a 12-year-old.

The chapters are short and sweet and feature lines like, “I’m banished to the back seat with JB, who only stops playing with my locks when I slap him across his bald head with my jockstrap.”

Alexander emphasizes the importance of family in the novel, adding that he was really close with his sisters growing up. As far as any other autobiographical details, he says he made up most of the book. “I played basketball a lot, but I wasn’t good enough to be competitive. I excelled at tennis and talked a lot of trash, which I bring into the book,” he says.

That trash-talking is particularly evident in one chapter in which Alexander writes, “The hoop too high for you? I snicker but it’s not funny to him, especially when I take off from center court, my hair like wings, each lock lifting me higher and HIGHER like a 747 ZOOM ZOOM!”

How does Alexander get into the mind of a 12-year-old boy? “I visit a lot of schools,” he says. With 18 published books and one more on the way, Alexander is a prolific author and poet, and he’s also a literacy advocate both in the U.S. and abroad. “I go to schools at least three days a week and share with them, listen to them, eavesdrop. I’m inspired by young people. I feel like they’re my muse,” he says. Alexander teaches poetry during some of his visits and he says despite kids’ initial resistance, by the time he leaves, “they’re all kind of converts.”

The Crossover isn’t just about trash-talking, though, it has a lot of heart — and stuff gets pretty heavy. “It’s full of woes and wonder,” says Alexander. “It’s important to me for it to be authentic.” From sibling rivalry to puberty and health scares, the novel is sincere in its coming-of-age message. Josh deals with anger, jealousy, sadness, and joy as we imagine any kid would — with a lot of complicated emotions.

Any novel, especially one geared towards young adults, is going to have some kind of message, says Alexander. “You have to layer your text with new and different ideas. Adults have a responsibility to children for them to imagine a better world,” he says. But, he adds that subtlety is key, “I’m not trying to be didactic.”

Alexander comes close to being heavy-handed with some of The Crossover, but he threads just enough earnest fun into it that you can’t help but wish your SAT vocab cards had come from him. The chapter “cross-o-ver” reads, “A simple basketball move in which a player dribbles the ball quickly from one hand to the other. As in: when done right, a crossover can break an opponent’s ankles. As in: Deron Williams’s crossover is nice, but Allen Iverson’s crossover was so deadly, he could’ve set up his own podiatry practice.”

We loved Alexander’s book, but we’re not 12-year-old boys, so we wondered how receptive kids may be to this visual, rhythmic, and poetic novel. In a PBS interview earlier this year, fresh off of a Newberry win, Alexander discusses The Crossover, and the ironic appeal of poetry for young boys. His excitement is contagious, but not as contagious as the joy emanating from part of the interview segment — a video of a kid rapping from the novel. He looks to be about Josh Bell’s age and he grins as he spits out the words.

And just like that, Alexander is getting kids to read.

Kwame Alexander will sign books on Saturday at The Best Friend Train Museum at 1 p.m. and will participate in the Show Some Empotion panel at the American Theater Cinmea at 3 p.m.