KinFolk lives up to its name in both food and service 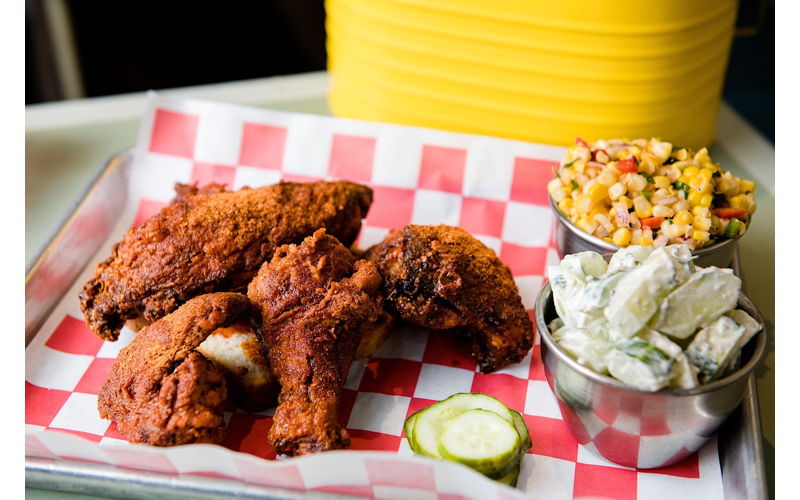 Welcome to the Family

According to local lore, Nashville hot chicken owes its existence to a two-timing man.

At the height of the Great Depression, Thornton Prince’s girlfriend grew tired of his philandering ways. Sneaking in early one morning, Thornton discovered his lady had prepared him his favorite dish, fried chicken. However, in an act of revenge, she’d loaded it with all the cayenne pepper in the pantry.

The plan to teach her man a lesson backfired. Thornton loved the intense flavor, and shared some with his brothers, who agreed. While the name of the now ex-girlfriend has been lost to history, the recipe has not. Thornton and his siblings recreated the spicy seasoning, and a few years later, the BBQ Chicken Shack café opened. For nearly 80 years, the fiery poultry remained a popular secret of Nashville’s black community, due mostly to pervasive racial segregation.

In 1980, Thornton’s grand-niece, Andre Prince Jeffries, took over the business and renamed it Prince’s Chicken Shack. A decade later, she moved the establishment to a strip mall in East Nashville, where it remains to this day.

Over the years, others began to emulate the recipe, a trend that was picked up on by the son of a successful restaurateur. The first Hattie B’s opened in 2012, in a hip, trendy area adjacent to both Music Row and the Vanderbilt and Belmont University campuses.

By 2016, KFC had jumped on the bandwagon, and even City Paper was in on the hot stuff, with food writer Robert Donovan gracing a Feb. cover “Searching for Nashville Hot Chicken in Charleston.” Four of the seven local hot chicken spots in Charleston are now shuttered, which means if you’re afflicted with a hankering, you’d best make the trek down the live oak and Spanish-moss canopied Betsy Kerrison Parkway.

A stone’s throw from Kiawah, KinFolk occupies the tiny space once inhabited by Crave Smokehouse. With snug seating for two dozen, it’s something of a shack in its own right. Owned and operated by a pair of brothers, there’s a welcoming “door’s always open” vibe that permeates everything from the decor to the food.

The menu changes often, seemingly most influenced by the whims of nature and her bounty, and on my visit, the heirloom tomato salad ($9) beckoned. Simple and straightforward, it does exactly what one would hope — elevate the pure pleasure of a perfectly ripe, late-summer tomato. Cut into mouthful-sized chunks, the tomatoes are tossed with paper-thin shallots and a light vinaigrette, then finished with ribbons of fresh parsley and basil. In a world where my postage stamp-size backyard nurtured more than just weeds, herbs, and hot peppers … this is the salad I would make for myself.

In contrast, the crispy pork ribs ($10) were less successful. Although the Korean kal-bi like sweet soy “sticky sauce” is on point, the ribs themselves are tough and unforgiving. Efforts to free the meat from the bone result in a scene more befitting a hungry hyena than a first date. On the other hand, seeing how a potential mate handles such an oral tug-of-war might be a good idea after all.

Service is warm and efficient, and the closely set seating lends itself to crossover conversations with fellow diners. While normally one to give a wide berth to communal table situations, the low-key, friendly ambiance is, well, downright familial.

When approaching the Nashville-style hot chicken, I started in the shallow end with the quarter bird ($6.75 leg and thigh/$7.25 breast and wing) prepared mild. The breaded poultry is fried to an enduring outer crunch and then hand coated with a mix of (educated guess) brown sugar, black pepper, and garlic powder, plus cumin, smoked paprika, and lard. In addition, much like Indian or Thai cuisine, note that even the ‘mild’ has a small touch of heat.

Served on a slice of white sandwich bread and accompanied by three lightly brined bread-and-butter pickles, the chicken itself is at once crisp and juicy. Arguably, it’s at the hot level ($14 half chicken/$26 whole) that the dish achieves true Nashville distinction. The melange of black pepper, smoked paprika, and sweet sugar hit first, followed by a slow burn at the back of the throat. The chicken’s inherent mildness helps to temper any real intensity, and the heat lingers for just a few seconds. In other words, order it this way if you can.

I have to imagine that the fire seasoning is closest to what Thornton Prince was served that fateful morning. With a similar sweet/smoky start, the cayenne comes on late and strong, resulting in a long-lasting smolder that can be felt — more than tasted — down one’s throat. It’s also now clear why Thornton didn’t take his punishment all that seriously, as the cayenne’s heat falls in the comparably bearable middle of the Scoville scale, far below the brutal habanero, Scotch bonnet, or bhut jolokia (a.k.a. ghost pepper).

For those less inclined toward spicy food, the B.L.T. ($9) beckons. While not entirely devoid of spice — there are traces of a rub evocative of that on the chicken — the three large, tender slices of smoked pork belly are in genteel company. Placed in a soft, sweet bun along with a fat, juicy slice of heirloom tomato and salad-sized pile of baby red and romaine lettuce, it’s a light, upscale take on the classic sandwich.

Served with pickles and Zapp’s potato chips, upgrading to a housemade side will set you back an additional $2. The cucumber salad ($3.75 a la carte) is an unexpected pleasure. Large chunks of seeded cucumber are tossed with parsley, dill seed, and a sour cream-based dressing. Simple and refreshing, you get the sense that whoever is making this food gives a damn, and is enjoying themselves at the same time.

Meanwhile, the tender pit-cooked beans ($4) lounge in a tangy barbecue sauce and are accompanied by hefty chunks of smoky pulled pork. Chockablock with the tender meat, the generous portion could serve as a meal unto itself.

Last up, the sweet corn salad ($4) took somebody some time to prepare. Freshly shaved from the cob, the toothy grids of corn are combined with diced red onions, parsley, and bell peppers, and tossed in a simple vinaigrette. It’s an uncomplicated taste of summer that also feels like a labor of love.

Living up to its endearing name in both food and service, KinFolk is a charming outpost and a welcome addition to the Charleston family, not to mention a kickass, passive aggressive way to make a cheating (now) ex sweat.

South Carolina once again set a new single-day high number of COVID-19 cases, shattering the previous record set on Friday. Cases continue to surge post-Thanksgiving and vaccines are likely still far away from widespread availability. South Carolina Department of Health and Environmental Control reported 2,715 confirmed cases of COVID-19 in the state on Saturday, with […]

South Carolina once again set a new single-day high number of COVID-19 cases, shattering the previous record set on Friday. Cases continue to surge post-Thanksgiving and vaccines are likely still far away from widespread availability. South Carolina Department of Health and Environmental Control reported 2,715 confirmed cases of COVID-19 in the state on Saturday, with […]

About a dozen years ago, a think tank challenged Southern legislators to engage on multiple environmental challenges. Unsurprisingly, they mostly just nibbled around the edges, tweaking this and slapping putty on that. They haven’t confronted climate change seriously or done much to truly embrace renewable energy. Seeking environmental justice for the downtrodden is mostly just […]