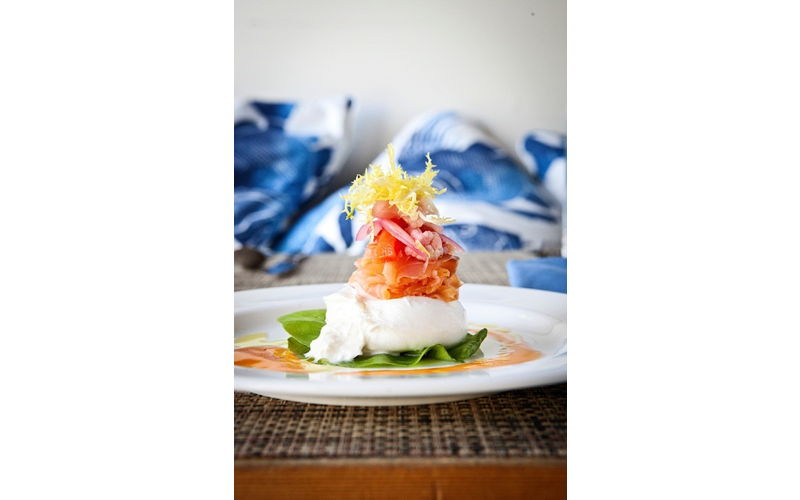 Room with a View

It begins with small delicate slivers of local sea bass. The smell is sweet with a hint of the sea, its hue a translucent pink, and the texture smooth, eventually dissolving on your tongue. Preserved lemons add zest and color to a plate dressed with the finest olive oil and slices of Calabrese chiles — a perfectly balanced dish.

After the crudo ($12), big lumps of fresh blue crab mingle with a crowd of al dente gemelli that’s tossed in a vibrant, citrusy pistachio pesto ($24). A perfectly seared triggerfish dressed with roasted tomatoes sits on a bed of vermicelli in a beautiful pool of lavender lambrusco Vidalia onion crema ($27).

A twirl of the glass and a sip of a crisp Grillo ($10) follow a bite of fresh calamari stuffed with tender pork belly. Out past the large windows, blue waves roll onto the beach. Gourmet Italian cuisine paired with an ocean view. This is the creation of Ken Vedrinski.

The caliber of food that Vedrinksi puts out is not new. Back in 2007, I was sitting at the bar at Sienna, his former restaurant on Daniel Island, eating a seared triggerfish dish that blew my mind. Vedrinski suggested I come back in a couple days because a fresh batch of octopus was on the way. He assured me it would be the most tender, delicious octopus I would ever eat, and sure enough, the marinated octopus salad won me over.

Trattoria Lucca is where I first fell in love with crudo, a raw fish dish that Vedrinksi has mastered. Anyone who’s had his crudo will tell you it’s the best in town, but there’s something special about eating it with a direct view of the ocean; a place where the smell of the sea is in the air, where the Atlantic glistens in the near distance, where the level of creativity and finesse goes well beyond blackened grouper with a side of steamed vegetables. A place where a taste of Italy meets the sea.

Back before the Great Recession, Vedrinski made a serious investment in space at the old Cigar Factory on East Bay, where he planned to open an Italian seafood restaurant called Introdacqua. The market took a hit, the bank pulled out, and what seemed like a great idea dissipated into thin air — a blessing in disguise. In early 2013, Hucks Lowcountry Table abruptly closed its doors and the quaint space on Isle of Palms fell into Vedrinski’s lap. The vision soon became a reality and Coda del Pesce — or “tail of the fish” — was born.

The transformation of the space is remarkable — most noticeably, the large floor-to-ceiling windows with a view of the Atlantic Ocean. A beautiful Syrian granite makes up the bar that resembles oyster shells, and small porous white stone squares poke out at different lengths on the backsplash for a checkerboard effect. Small arches made of brick separate the dining room from the bar in a setting that is casual yet sophisticated.

The menu is broken down into four main sections: antipasti, primi, secondi, and dolce, with selections changing daily. Even the common menu items are often mixed up. On one occasion the Frito Misto (fried food) consists of calamari, shrimp, and grouper, while on the next visit we are served calamari, shrimp, sea bass, and sardines ($14) — a nice change. Each of the two variants were piping hot, had a nice crunch, and the perfect balance of seasoning — both were served with citrus agresto that packs a punch.

It’s the Italian influence that makes these dishes. Vedrinski travels to Italy multiple times a year, keeping his ideas as fresh as his pasta. A bowl of housemade pappardelle tossed with a touch of olive oil, citrus, and Colatura di Alici (anchovy extract) is topped with a healthy portion of yellowfin tuna crudo, a dash of sea salt, and parsley — pure bliss. Fresh chitarra — “guitar” noodles — glistening black with squid ink might be accompanied by a fresh filet of salmon. The combinations are endless.

At Coda del Pesce, one can be certain that each of these splendid dishes will be presented by the most knowledgeable of staff. Three visits encountered three different servers, and they were all able to promptly answer questions and provide educated recommendations. They yielded details from the origin of specific wine grapes to the difference between sugo and brudo. This included various off-menu dishes that were provided when we ordered a chef’s tasting menu.

A crispy sea bass filet perched atop a bed of small calico scallops, white acre peas, pancetta, and bacon, all swimming in a moderately sweet broth of Vin Santo (Italian dessert wine) and goat butter was a clear winner, as bowls were licked clean. A meaty scallopini of Cherry Point swordfish, oyster mushrooms, and asparagus were complemented by a sweet and sour agro dolce sauce — a nice transition from sweet to rich.

The emphasis on using the best Italian ingredients goes beyond a plate of pasta. Vedrinski knows his wine and he knows it well. The standard wine list consists of frizzante (sparkling), bianco (white), and rosso (red). Three to five varieties can be ordered by the glass, per section, for around 10 bucks. The bottles start at $38 and go upward to $85. If a celebration is in order, one may dig deep into one’s pockets and make an offer on one of the high-end bottles, like Super Tuscans and Brunellos, that aren’t on the list. When wine isn’t on the radar, a negroni ($9) or Carpano Manhattan ($10) should do the trick.

After finishing a devilish milk chocolate and mascarpone panna cotta ($9), the ocean is waiting. Feet sink in the sand as waves come crashing in. The sun goes down, creating a dimly lit glow of orange and pink, and all is good in the world. The marriage of Vedrinski’s clean Italian cuisine and the glistening sea is something Charleston has needed for quite some time — it’s the total package. I wouldn’t be surprised if Coda del Pesce earns Vedrinski another James Beard nomination. Only this time, he might just win.