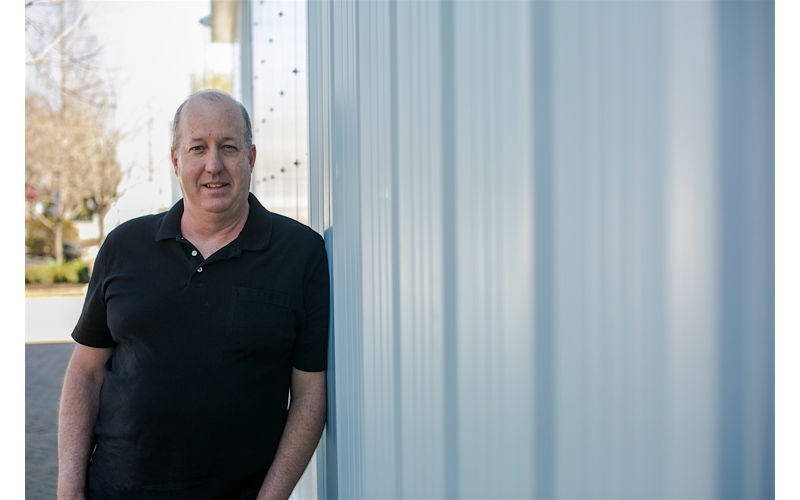 “I’ve always been a class clown kind of guy,” says Keith Dee, local stand-up comedian and host of comedy nights at Creekside Kitchen and SportsBook of Charleston. It was this sense of humor — be it cracking jokes with friends or appreciating a good pun — that finally took its hold on Dee. It only took five decades or so.

“I’m a 52 year old father of five, and a senior IT manager at a paper mill,” says Dee. And three years ago he decided that it wasn’t too late to be what he might have been — a stand-up comedian.

“I was at the Helium Comedy Club in Portland and just got up there,” says Dee of one of his first stand-up experiences. “I got the fever.” The fever continued when Dee got back to Charleston and found his way into improv classes at Theatre 99, which he loved, but which didn’t seem as accessible as stand-up, at least as far as opportunities for performing around town.

Most 50-somethings pick up a hobby that reflects some kind of mid-life crisis or revelation. Rather than turning to a sports car or new exercise regimen, though, Dee decided to put himself in one of the more vulnerable positions creative folks can imagine — that of a person standing behind a mic, trying to make people laugh.

“Last year I started getting into the open mic scene,” says Dee. “I’ve always been a leader type, and while I was at these open mics I’d think, ‘If this was my show, this is what I would do.'” So Dee’s move to comedy show host was only natural, made all the better by an eager and willing partnership with Lucky 17 Restaurants, a group that owns SportsBook of Charleston, 3 Matadors, Creekside Kitchen & Brewhouse, Southside 17, and Southern Roots Smokehouse.

Dee started off this hosting hobby by holding an open mic at SportsBook. People showed up — it worked. At SportsBook Dee hosts both open mics on the first Friday of every month, as well as comedy showcases, held every few months. At Creekside, Dee presents headliner shows; he packed the house with his first headliner, former Charleston comedian Dusty Slay.

Slay brought a big crowd, sure, but he also offered Dee some invaluable advice. “He gave me a list of things that are necessary to have a great show,” says Dee. Successful steps include: making sure every chair is facing the stage — if someone’s facing away from the stage they’re far more likely to start talking during a show; having some sort of raised surface to perform on — for Dee this has meant constructing his own 6’x6′ stage; and, perhaps most importantly for a host — never do a comedy bit after the headliner (it’s poor form).

Dee’s natural leadership qualities lend a certain ease to hosting; at the end of the day though, he’s in control. “It’s my show — I’m booked,” says Dee.

Dee’s stand-up doesn’t come quite as easily. “I’m not a natural comedian,” says Dee. “I have to work at it.” He says that audiences over 30 usually find his material pretty entertaining — they can relate to his jokes. Younger audiences? Well, Dee thinks he can at least get a laugh from “how dumb I am.”

At a recent headlining show at Creekside, a sold out house sat before Dee (all chairs facing the stage, of course). Dee wore a T-shirt and jeans, making the most of his outfit by cracking a joke about how his wife doesn’t like him to take carry-on bags on airplanes, “Because then I lift my arms, and my shirt goes up, like this.” Dee’s ease on the stage set the scene for a kickass comedy show — one that featured both a local and regional comic, as well as a recent contestant on Last Comic Standing. As each comedian stepped up to the homemade stage (“I just wheel it around with me everywhere,” Keith says), they acknowledged the host, thanking him for putting the show together.

And normally, ya know, you kind of listen to the emcee, slowly sipping your beer, maybe even scrolling through your phone. You eagerly watch the comedians, laughing, giggling, or maybe even gasping at the more lewd material. But Dee, in all of his sincerity and general good humor, stood out. At the end of the night, as empty plates sat before a laughed out crowd, comedian Drew Thomas wrapped up his set not with a joke, but with an acknowledgement of the show Dee had put together.

“I’ve lost way more money than I’ve made, but I love nothing more than watching 60-100 people belly laughing, and knowing I made that happen,” says Dee.

Sometimes you find yourself in a booth at a West Ashley restaurant you’d never have visited otherwise, with a friendly couple sitting across from you, a group of older folks behind you, and a really happy woman perched directly in front of the comedians, working her way through a bucket of Miller Lite. And that — that’s all thanks to Keith Dee.

Catch Dee performing at the Charleston Sports Pub on Sat. March 10 and emceeing a showcase at SportsBook (Tanger) on Fri. March 30.