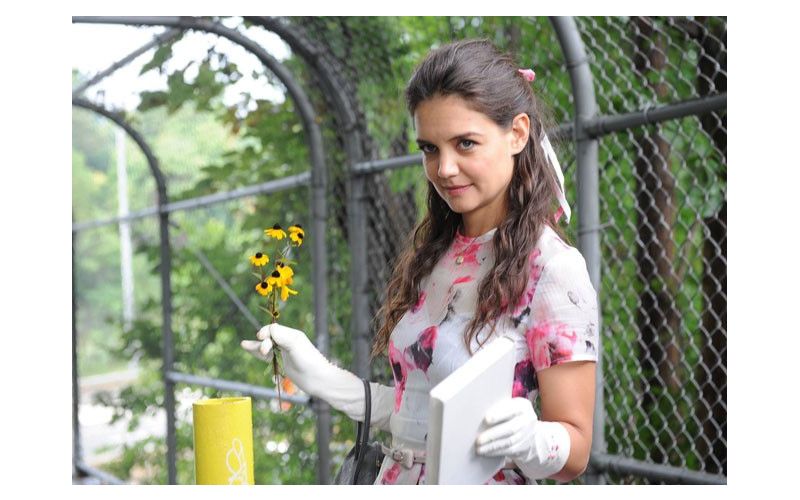 If you were wondering what Katie Holmes has been doing since her big escape from Tom Cruise and the Church of Scientology, you might imagine a quaint New York penthouse, quality time with Suri, and small recurring roles on sitcoms and reality TV. But rest assured, the now womanly Holmes, who for so long was the icon of teen angst on Dawson’s Creek, has come out indie and angry. Or at least, that’s what her latest endeavor Miss Meadows would indicate.

This quirky and dark ditty sets the table right from the start as Holmes’s Miss Meadows, donning a dainty debutante dress and tap shoes, recites poetry (the lyrical iambs in perfect tune with her toe clicks) as she skips and hops her way through a bucolic neighborhood that might make the anxiety-riddled matrons of Desperate Housewives a tad jealous. There’s even prancing deer and an attentive bluebird. You half expect “Zip-a-Dee-Doo-Dah” to break out or the fairy tale-reality seam of Once Upon a Time to open up, but Miss Meadows is something else entirely. Sure it treads on lexicons of happy childlike euphoria, but when a gruff old perv in a beat-up pickup (cliches and stereotypes abound) drives up and insists Miss Meadows get into the cab at gunpoint, the prim and proper pixie reaches into her handbag, produces a pearl-handled derringer, and bang, bang — we know we’re not in Kansas anymore.

This isn’t Miss Meadows’ first foray into vigilantism, nor will it be her last. Like Charles Bronson’s avenger in Death Wish, Meadows doesn’t seek such opportunities, but when the priest takes too long in the confessional booth with an adolescent boy or the mass murderer who just cleared out a fast-food establishment eyes Miss Meadows as one more for the papers, she’ll do what she believes needs to be done — much like John Waters’s sardonic and rife Serial Mom, which rounded the same bases nearly two decades earlier with gusto and bite. Both films take great relish in their subversive skewering of suburbia, but unlike Kathleen Turner’s playfully demented Beverly, who enjoyed the thrill of the kill tossed in with some sexual perversions, Miss Meadows is an abiding prig, surgically targeting the bad and protecting the innocent. Whereas Miss Meadows is neat and wispy, Waters’s spin was messy, unseemly, and provocative.

As a functioning member of society, Miss Meadows holds a cheery post as a well-liked substitute teacher at the local elementary school. She also catches the eye of the sheriff (a tepid James Badge Dale) who spends most of the film sheepishly courting her while trying to solve the sudden rash of murdered miscreants. And then there’s the recently released sex offender (Callan Mulvey, one of those buff lads in the 300 flicks) who circles Meadows with menace and knowing insight into what drives her — the $64,000 question the film answers in childhood flashbacks and fragmented therapy phone sessions with her mom (Jean Smart).

Writer/director Karen Leigh Hopkins has had an intriguing career. She held her own with Arnold Schwarzenegger in a bit role in The Running Man and has script creds that include Stepmom, but behind the camera, she’s still pretty much a newbie and it shows. That’s not to say Miss Meadows doesn’t have passion and vigor. It does, but like an affectionate young colt, bristling with vibrance and unpredictably. The flick alluringly possesses limitless energy and absolutely no control.

I wonder if in composing the storyline, Hopkins had considered the recent Newtown shootings. Meadows, a champion of education, manners, and lawful conduct, seems like the perfect fairy-tale response to such random violence. It’s a neat idea, but drawing such a connection feels far-flung and unearned. The overall whimsical sheen of the film is both an asset and tired kitsch.

The cinematographer Barry Markowitz, whose CV lists Sling Blade and Crazy Heart, does well to conjure up a pristine suburban theme park of well-manicured lawns framed by white picket fences masking dens of dysfunction. Holmes too is game, and she gets the perky righteousness down pat. It’s when the black comedy demands a deeper illumination of the character that the spell gets broken, but that’s more on Hopkins the filmmaker than Holmes the actress.