Julianne Moore tries to catch her husband cheating in Chloe 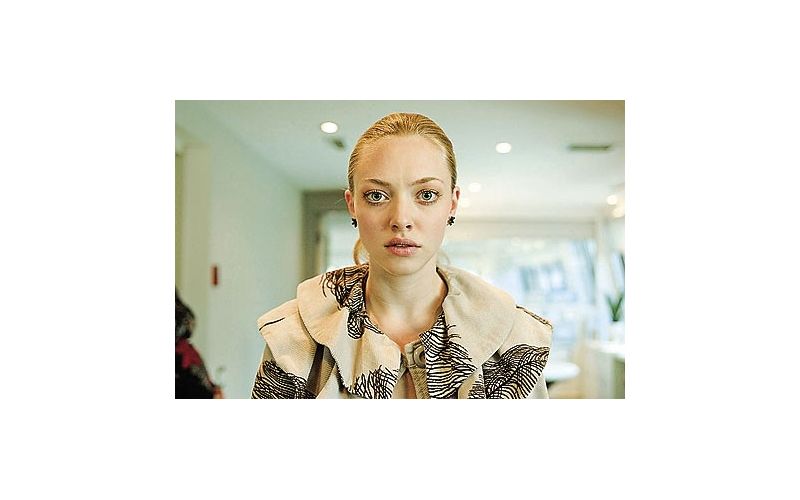 The Toronto couple at the center of Chloe are attractive, with successful and challenging careers, a fantastic home, and an enviable amount of free time for coffee shops and brooding. Lots and lots of brooding.

Knowing they have all their basic healthcare needs taken care of must give Canadians more time to fret and stew about interpersonal relationships. Because no one turns out more gut-churningly introspective and psycho-sexually tortured cinema than our neighbors to the north, rivaling even the French for the amount of pining and misery they can cram into an evening’s entertainment.

Chloe is a film by Atom Egoyan (Ararat, The Sweet Hereafter), so pining and misery are pretty much par for the course. Fans of his work know that placid, low-ebb despair and parallel sexual electricity often accompany the Canadian auteur’s films.

Chloe‘s Catherine Stewart (Julianne Moore) is an especially miserable and frustrated citizen of Egoyanville. When the movie opens, Catherine’s surprise birthday party for her college professor husband David (Liam Neeson) is about to fizzle when the birthday boy purposefully misses his flight home to have a drink with a pretty student. Catherine has a husband she is convinced is cheating, and she has reached an unpleasant crossroads in her life. Her aging spouse has mellowed into a soulful, appealing “catch,” while she feels that age has only served to make her invisible.

When Catherine has a chance encounter with luscious call girl Chloe (Amanda Seyfried) in a posh restaurant bathroom, an idea forms. Perhaps Catherine can flush out the truth about her husband’s infidelity by paying Chloe to seduce him. As one might guess, things don’t go exactly according to plan.

Egoyan has long focused on how even the most intimate acts are defined by alienation and estrangement. Like his Canadian cinematic comrade David Cronenberg, Egoyan’s read on sex is as glacial as they come. His 1994 art-house sensation, Exotica, tread similar ground, showing the alienation inherent in desire.

Chloe is also a fascinating glimpse at an utterly compelling woman. Catherine is both pathetic and heartbreaking. You see how casually her troubled teenage son dismisses her and how easily her husband denies a chance at intimacy with her for more computer time with his students. She is a woman adrift who spends a lot of time gazing out of windows at the bustle around her, trapped inside a cage. Played by another actress or envisioned by a different writer or director, Catherine could be frighteningly intense or dismissively pathetic, but we feel a unique empathy for her point of view.

One can’t help but think that the input of screenwriter Erin Cressida Wilson (adapting the French film Nathalie) gives Chloe its refreshing depth and honesty. A professor of playwriting in California, Wilson brings a true writer’s sensibility to the film, attuned to the depth of information that can be conveyed in small details. For instance, when David defends his openness and emotional availability with his students to ward off Catherine’s jealousy, words that would sound disingenuous and ridiculous coming from anyone else somehow sound authentic coming from this soulful academic.

Where Chloe stumbles is when it moves out of introspective, navel-gazing mode and into a thriller mode more in keeping with knife-edge shockers like Fatal Attraction. It’s a bit of a disservice to everything thoughtful that has come before. For some, it might be easy to write off the film as a purely Hollywood thriller, but Egoyan packs in enough wisdom about the slow erosion of relationships, about aging, about female desire, to make Chloe utterly worthwhile.

College of Charleston students will present six monologues Dec. 4 and 5 that provide different perspectives on the last tumultuous year.