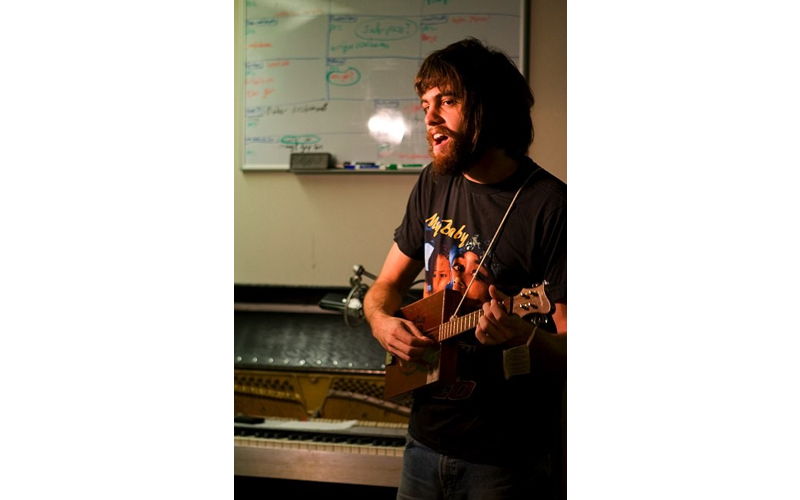 A new sound, a new ambition

Joel T. Hamilton is part of a dying breed of musicians. Though many are still granted the epithet, there aren’t a lot of real “indie rockers” left in today’s music industry. The do-it-yourself, truly independent mentality artists used to adhere to has largely been replaced by corporate-run marketing schemes and promotional campaigns.

Hamilton says he still prefers working for his independent Shrimp Records label to being signed to major label Universal.

“It’s like the little guy putting his dukes up,” he says of the label he shares with several locals. “The little guy’s swimming against the current, fighting the good fight. It’s something we all associated ourselves with.”

When Hamilton was just 16 years old, he formed alternative pop-rock band the Working Title, and they released an acclaimed debut.

Two years later, the band joined Universal. Now, six years and two Working Title albums later, the Charleston native is about to release his first album on the local label he helped start.

“The Working Title started out with a few close high school friends,” says Hamilton. “They ended up parting ways with the band over the years. It came down to just me. Now I want to make something apart from all that.”

Out of the four members of the Working Title, Hamilton alone has decided to stay in the music business. This week, he will release Feels Like We’re Going to Win, a self-produced solo album uncluttered with the soaring electric-guitar riffs and flourishing wails of emotion of the Universal releases.

Hamilton seems to have finished what he started on his first indie solo collection Bone Island, fully replacing electric atmospherics with an array of oddball instruments and a folky acoustic sound.

Rife with accordion-led rhythms, haunting melodies, and a variety of analog instrumentation, Hamilton has produced a captivating indie-rock aesthetic.

He recorded most of the new tracks at his home studio with Michael Trent (of Shovels & Rope, the Films) on bass and Jack Burg on drums. Though he didn’t consciously choose to cultivate this new sound, he stumbled upon it through continually challenging himself to sound different from past material.

“I think I hear myself six months to a year after I’ve recorded something and unconsciously want to change what I did,” says Hamilton. “I don’t know if it’s just for the sake of change. I feel like it’s a normal thing, but maybe it’s not, to be your own number one critic.”

The Shrimp Records family is comprised of several Charleston-based songwriters, including Trent and Cary Ann Hearst (both of Shovels & Rope), Owen Beverly, Sadler Vaden (of Leslie), and Bill Carson (of the Garage Cuban Band). Though Hamilton admits it’s currently more of a co-op or “maybe even a support group” than a real label, he hopes to eventually expand by attracting more Lowcountry musicians.

“It’s an idea we all have had for a long time, running our own careers and our own company — if you can call it a company. It’s something we’ve been building from the ground up,” says Hamilton.

For the first time in his musical career, he decided to release music on vinyl. Though albums are more expensive to produce this way, he values the distinct sound quality and the ability to better showcase his album’s artwork — a basic mountain scene drawn in pencil and flipped upside down — on a bigger surface.

“There’s something special about hearing music on vinyl that a lot of people are drawn to,” observes Hamilton. “I think most people at this point buy a CD and put it on their computer, MP3 player, and then toss the CD out — or put it in a stack in the corner in their room.

“Vinyl is so much more of a piece of art,” he adds. “It showcases the artwork for your record in a much bigger medium.”

Just in case the intrinsic artistic merit of a vinyl record isn’t enough for people to spend the extra cash, Hamilton says that he’s also going to give a free digital copy of the CD to everyone who purchases a copy of the vinyl.

In the past six months, he traveled to New York City to perform with one of his musical side projects, the InLaws (alongside Beverly), and to Germany to tour with his friends the Films, who were short a bassist player. However, he still says he has no urge to leave Charleston.

Hamilton claims that his ambition isn’t to be the next Conor Oberst or Bob Dylan, but only to be able to garner enough Charleston support to live off his music in the Lowcountry.

“I think everybody in their hometown has an urge to get away, but throughout my life I’ve gotten out of Charleston a whole lot — and sort of satisfied that urge,” he says. “Now, there’s a greater urge to build something here.”

In the Jukebox: Joel T. Hamilton