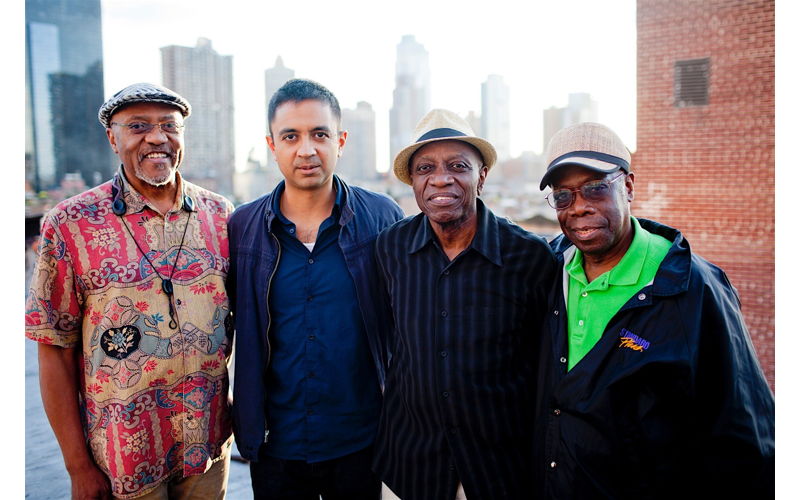 When you listen to Trio 3 perform, what you’re hearing is a conversation. You may not be able to name each note or play along. The rhythms may be unfamiliar, and the melody somewhat foreign. But at its very heart, the language of what they’re laying down is universal.

With Oliver Lake on saxophone, Reggie Workman on bass, and Andrew Cyrille on the drums, Trio 3 are masters of improvisational jazz. Honing their craft over decades alongside the greatest to ever play, the three musicians have their pick of who they choose to invite into the fold. For that reason, pianist and MacArthur “Genius” Vijay Iyer considered it a bit of an honor when he was asked to record with the group in 2013.

“These guys are all legendary musicians. They are all esteemed elder statesmen in the field of creative music, improvised music. Pioneering African-American artists. So I’ve admired them for decades,” says Iyer, who first saw Trio 3 perform together in the mid-’90s.

This isn’t to say that Iyer doesn’t bring his own esteem to the group. Universally hailed as an influential and important musician in his own right, Iyer also holds a PhD in the cognitive science of music. Perhaps it is for this reason that he is especially well-suited to understand why performing alongside Trio 3 is so special.

On bass, Workman has more than held his own on stage with John Coltrane, Thelonius Monk, and other big names that strike a chord with even those with the slightest knowledge of jazz over the past 60 years. Looking elsewhere in the rhythm section, Iyer describes Cyrille’s elegant touch on the cymbals, his buoyant sense of time, and the sense of care and detail in his attack. That leaves Lake on saxophone, who Iyer hails as an agile artist who spreads his talents from music to painting to poetry. As for the members of Trio 3, they offer their own explanation about the importance of inviting artists such as Iyer to have a seat alongside them.

“It broadens the horizon in terms of what kind of music we play. Everybody has different conceptions as far as compositions are concerned and it’s another challenge, an artistic challenge. At the same time, it’s also what you might call an artistic benefit, a reward of having another voice to be part of the whole,” says Cyrille. “Another voice also brings something else to the table. It’s like when you invite someone to a party and you say, ‘Bring something, some other kind of food that you like and you think other people will like.’ It’s the same thing with the music.”

So when it came time to collaborate, Iyer brought a composition inspired by the death of Trayvon Martin. While the 17-year-old’s tragic death was still fresh on the minds of Americans, Iyer understood that racial violence had always been a part of the nation’s history. That piece of music would eventually carry the title “Suite for Trayvon (And Thousands More).”

“Most art is usually conditioned by the environment that the artist lives in. Whether you are a poet, a writer, a dancer, a painter, a musician, the dynamics of how you live, where you live, influence what it is that you express in the medium of your choice,” says Cyrille. “Of course, we have problems in this country as far as race is concerned and sometimes things are done that aren’t necessarily justified. So we feel that as citizens, just like everybody else. It’s just that we have an opportunity or a way of expressing what it is we feel through the art that we play.”

The composition begins with Iyer taking a pensive walk down the keys, lower and lower, as Cyrille taps out a consistent and ringing stutter on the cymbal. The piano and saxophone move in and out of synch with one another. Again, it’s the sound of these four musicians having a conversation. One that the country’s always needed to have, but could never quite find the right words to express.

“Sometimes music is defined as what you can’t say in words. So there’s a certain kind of feeling that’s projected when musicians get together in any kind of ensemble. I don’t care what the ensemble,” says Cyrille. “You can be playing Bach, Beethoven, or Mozart with an orchestra. All of that has to come together as an emotional package that will reach the audience. It’s the same when we’re ‘improvising.’ It’s just another way of making music, with a certain kind of definition in mind of what we’re doing … That’s what music is.”