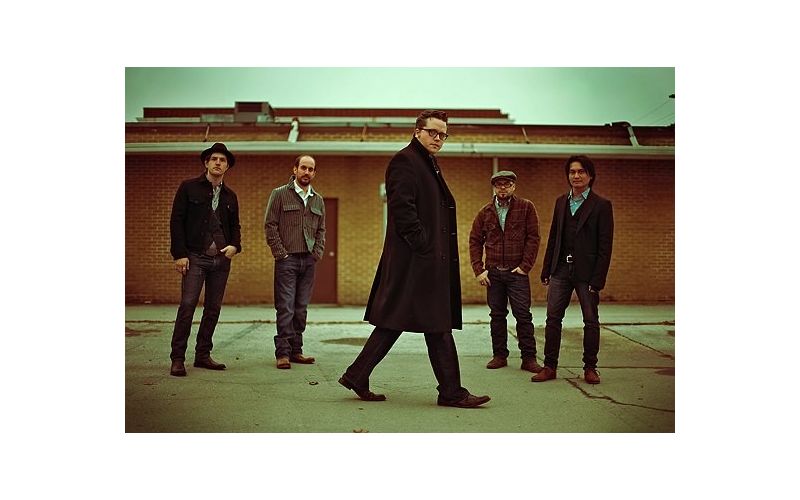 Jason Isbell’s new song “Codeine” was eager to get written. It wouldn’t even let the author get a full night’s sleep.

“I was having kind of a rough night,” says the songwriter and bandleader. “I had been up late, and I woke up with it in my head. It didn’t take any longer to write than it took to write down. I just kind of popped out. It was one of those that I knew if I went back to sleep, I would lose it.”

Speaking to us from a recent tour stop in Köln, Germany, Isbell continues to talk about how songs come to him. “Sometimes it comes out all at once like that, and I love it when that happens,” he says. “But inspiration likes to find you busy, so if I have a deadline, and if I’m about to make a record, I’ll spend a whole lot of time forcing myself to write. Very often, it’s a simple process of getting an idea stuck in your head, getting a phrase or a musical turn stuck, and once you can’t get it out, it kind of occurs to you, ‘Oh wait, that actually needs to be something.'”

“Codeine,” is the centerpiece of Here We Rest, Isbell’s second record with the 400 Unit, and his third since leaving the Drive-By Truckers in 2007. With former Sun Volt keyboardist Derry DeBorja, bassist Jimbo Hart, guitarist Browan Lollar, and drummer Matt Pence, the 400 Unit provide fantastic backing for the acoustic-based album, which marks a departure from Isbell’s harder-rockin’ days.

“That just happened to be the set of songs that we had,” says Isbell. “We really didn’t want to run from that. In the past, I’ve heard a lot of artists record songs that I thought should’ve been country songs, but they ended up being something different. We just really wanted to be true to these songs.”

Always a deeply personal writer, Isbell delivers more introspective songs on Here We Rest, like “Alabama Pines,” “Go It Alone,” and “Stopping By,” which continues his recent theme of yearning for understanding and home. Each one relays a sense of trying to figure it all out.

“They all start out from a personal place,” he says. “So anything that happens to pop up as a theme between them, I don’t want to say it’s an accident, but it just comes out of telling stories. They’re not always about me, but usually partly me and partly someone else, and if you get personal enough, you start to see themes.”

Another theme that Isbell is well-known for is writing about military men, from 2007’s “Dress Blues” to “Soldiers Get Strange” off his previous album with the 400 Unit. Here, he follows them up with the beautiful “Tour of Duty.”

“It came from a few different stories I heard from guys coming home,” he says. “It’s about putting on a mask and pretending you’re happy until you can be. He’s not comfortable yet in the civilian world, but he’s making a conscious effort to put on a good face for folks until he is.”

Isbell says he doesn’t feel obligated to write songs about heroes, but that he’s obligated as a writer to tell stories about people.

“I definitely feel indebted to those folks in a whole lot of different ways,” he says. “If I focus on what’s important to people, that’s a story I’m going to end up telling. For our generation right now, it’s the defining thing, and I would be remiss to avoid that in songwriting. If you’re trying to tell good stories directly and honestly, you’re going to have to cover war.

“I’m very concerned with situations of war and conflict,” he adds. “But I don’t really know what it’s like to actually be there, so I don’t write about that as much. I’m a little closer to people coming home and the experience of waiting for people to come home and the adjustment back to life, that’s something I know a little bit more about.”

Growing up in the soul/country/rock hotbed of Muscle Shoals, Isbell was immersed in music for as long as he can remember.

“Grandparents, uncles, aunts, great-uncles, and cousins, we all played music together once or twice a week,” he recalls. “The music that I make and the way I make it has a lot to do with where I came from. I might have also made good music if I was from a different part of the country or a different part of the world, but I’m really happy to be from there, I think I’m a lucky person to be from there.”

By the time he was 13, Isbell was writing his own songs, drawing from all manner of influences.

“My parents were listening to a lot of ’70s records, so I heard a lot of Queen, Lynyrd Skynyrd, Thin Lizzy, and bands like that,” he says. “And dad liked country music a lot, so it was Merle Haggard and George Jones. And somewhere in the middle, I found what I wanted to do, combined with some pop radio from the ’80s like Crowded House and Prince. Neil Young was a big influence early on too, and I listened to a lot of Jackson Browne and Randy Newman, just songwriter-oriented stuff. I was really trying to work on the craft of songwriting.”

Much of Isbell’s songwriting comes from listening to folks, which is especially evident on another new standout track, “Save it for Sunday.”

“I was listening to people in a bar telling their sad stories,” Isbell explains. “And each story would be beaten by the next guy’s sadder story. It’s about how the area I’m from is going through a hard time with the financial stuff in this country and how all these other problems exponentially multiply from that, how violence and drug and alcohol problems build on these economic problems. It becomes a difficult thing for a region to deal with. And it’s interesting, you know, maybe a few years ago you could find some sympathy at a bar if you’d just gotten laid off from your job, but now it’s hard to find.”

Because of his measured listening, Isbell is able to mark the times with his songs, in much the same way that journalists and novelists attempt to tap into the ethos of an era, to give voice to the way regular people feel about what’s going on around them. In a strange way, he’s providing a mildly Dickensian service, although his down-home modesty prevents him from admitting it.

“I guess I might have been a novelist if I wasn’t lazy,” Isbell chuckles, a sentiment expressed by his former bandmate Patterson Hood. “But I do feel like we’re all bound by the same sort of thing: trying to find a better way to say things, better than what already exists.”