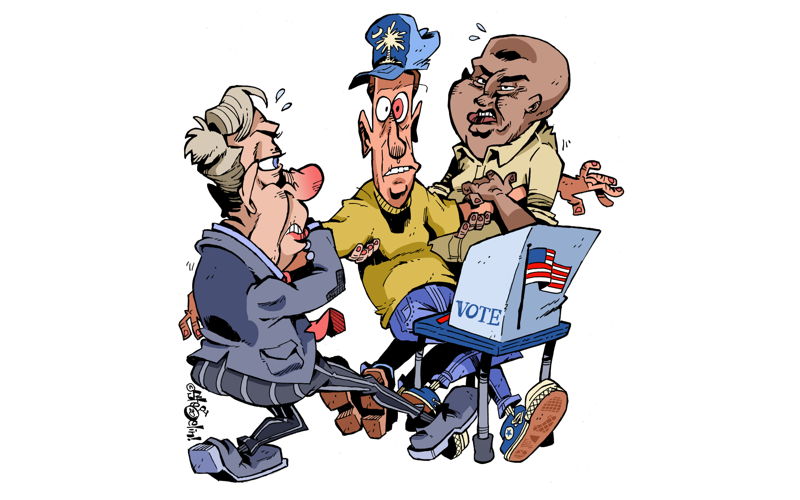 More than $100 will likely be spent to secure each of the 2 million-plus votes to be cast in South Carolina’s 2020 U.S. Senate election. The historic spending spree by incumbent U.S. Senator Lindsey Graham, Democratic challenger Jaime Harrison and other groups has turned up the pressure in an already-busy political season with the presidential election at the top of the ticket. But the 2020 election in South Carolina already had critical races teed up even before Harrison and Graham raised the stakes.

Here are seven ways in which the 2020 election has been different in Charleston and South Carolina:

Lindsey Graham’s record-breaking $3.9 million fundraising haul in the fourth quarter of 2019 passed the high mark he set the previous quarter — the most money ever raised by a South Carolina candidate at that time.

Fast forward a year: During the first two weeks of October, Jaime Harrison raised $22 million. As of Oct. 14, Harrison reported $108.23 million raised over the course of the election. Every new dollar that comes in is a new record set by Harrison. Added to the $68.42 million raised by Graham, it’s almost certain that more than $200 million will be spent by the campaigns to decide the contest.

The fundraising may be a positive indicator for Harrison, and the most recent polling shows him with a slight lead. Yet, the oddsmakers at FiveThirtyEight still give Graham a slight edge to come out ahead on election night. This is South Carolina, after all, where electoral college votes have been cast for Republican presidential nominees since 1976.

Still, the stars could align for Harrison, said one S.C. political watcher.

“If there’s only a 10% chance of rain and you don’t take your umbrella, you might get wet,” said Scott Huffmon, a political scientist and director of the Winthrop Poll.

Turnout among Black voters will be key to creating a path to victory for Harrison, Huffmon said.

With a week until election day, and with absentee ballot use at record levels, reports from the South Carolina Election Commission show statewide Black voter turnout is roughly tracking with registered voter data. However, in high-population areas, white voters have requested absentee ballots at slightly higher rates than nonwhite voters. White Charleston County voters make up about 73.6 percent of the electorate, but had requested about 75.6 percent of the absentee ballots issued as of Oct. 23.

“It’s tough, but not impossible to imagine a circumstance under which [Harrison] would win,” Huffmon said.

“In hindsight, it seems like everything was so clear — that Biden was just going to run away with it … But it did not feel like that at the time,” said Laurin Manning Gandy, a longtime South Carolina Democratic consultant who worked on U.S. Sen. Cory Booker’s campaign before he dropped out in January.

Ultimately, Biden ran away with the South Carolina primary, winning nearly 49 percent support in a seven-candidate field. Sanders took second, but did not break 20 percent.

“The momentum shift did not feel like it was being teed up the way it ended up being,” Gandy said.

The catalyst for the shift?

After South Carolina, as the pandemic spread around the U.S., Biden won 39 of the next 46 primaries, eventually securing the Demoratic nomination.

Midterm elections are usually rough for first-term presidents of a different political party than their predecessors. There was the Republican Revolution of 1994, the 2010 tea party insurgence and Democratic victories in 2018 that changed the trajectory of Donald Trump’s first years. One of those 2018 Dems was Joe Cunningham.

Cunningham’s victory coincided with a dramatic increase in voter rolls in Charleston County, which has voted for Democratic presidential candidates since 2008. (Voters in the county are split between Cunningham’s 1st District and Clyburn’s 6th District.) Fueled by overall growth, more than 65,000 new voters have registered in Charleston County between the beginning of 2016 and Sept. 30, 2020, according to the state Election Commission. More than 13,750 voters registered during the first three quarters of this year alone.

Key races in the Charleston area have the attention of politicos statewide. From the state Senate to the solicitor’s office, major changes could be coming to local halls of power.

For state races, Democrats have their eyes set on flipping several districts in the Charleston area. In Senate District 41, Democrat Sam Skardon has put up a tough challenge against Republican Sen. Sandy Senn. Richard Hricik has a shot of unseating incumbent Sen. Chip Campsen in District 43. In the state House, at least three districts could turn blue and new state Rep. Spencer Wetmore is hoping to hold the seat she flipped during a special election in August.

“Look at how many people have been participating in some sort of social justice movement of one type or another this year,” she told the City Paper. “I think those people are the ones who specifically want to make a choice.”

As Cunningham works to hold his seat in the 1st District in a contest not exactly tied up with a bow, Democratic candidates statewide are also putting up credible challenges. In the 2nd Congressional District, attorney Adair Ford Boroughs has forced U.S. Rep. Joe Wilson to make a case for his reelection to an 11th term. Boroughs has brought in $2.35 million for her campaign, outraising Wilson by more than $800,000.

In a normal election year, Boroughs might face long odds against Wilson. But having Jaime Harrison on every ballot statewide could buoy Democrats in races where they would otherwise not make as strong of a showing.

“To the degree that Harrison helps bring Democrats in general, and African Americans in particular, to the polls statewide, that’s going to increase the Democratic take,” Huffmon said. “So, it’ll make the races and Republican solid districts a little closer.”

With more than 1 million votes already cast a week before election day, absentee voting will likely kickstart record turnout to top the 2.1 million votes cast in 2016.

Increased use of absentee ballots will change election night as well.

“The expectation needs to be set now that, because of the increase in paper ballots South Carolina has received, you will not have all those ballots counted on election night,” said Joe Debney, who oversees elections and voter registration in Charleston County.

When it’s all said and done, whichever state officials are elected on Nov. 3 will begin redistricting, a once-a-decade process that to account for new census population figures. With few seriously contested Statehouse races in recent years, new lines could mean closer races across the state.

“We think competitive districts are a good thing and we have very few of them at the moment,” Lynn Teague of the League of Women Voters of South Carolina told us earlier this month. “Voters should have a choice. They shouldn’t go into the polling place in November with no meaningful choice.”