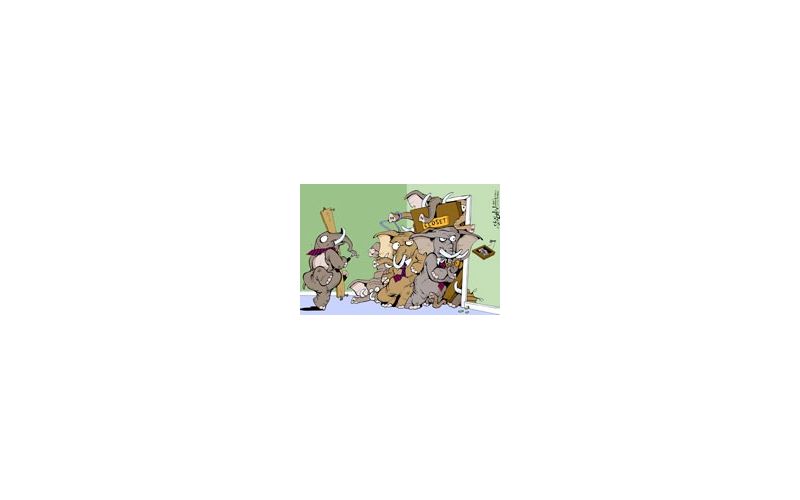 At 52, the life-long bachelor has been fodder for such rumors for years, but with the resignation of Sen. Larry Craig, R-Idaho — the anti-gay politician who pled guilty to disorderly conduct after allegedly soliciting sex in an airport men’s room — the internet is abuzz over who’s next, and they’re dying to know what’s going on in Graham’s bedroom. Is it the latest grasp for the light switch in South Carolina’s powerful political closet? Or the inevitable labeling of “closet-clinging self-hater” that befalls any content bachelor?

Mainstream media often avoids asking older, single politicians what they do in their free time. While there were rumors dating back 25 years, it wasn’t until blog reports about Craig trolling cruisy D.C. restrooms that The Idaho Statesmen put a reporter on the story. And even though they held the story until after Craig’s arrest was made public, some still accused the paper of orchestrating a witch hunt.

When GQ asked last year, Graham wasn’t mean, just dismissive. He said he’s not gay, just a loner. But that denial isn’t stalling renewed interest in the question. In a post on who’s next out of the closet following Craig’s arrest, blogger Michael Signorile (www.signorile.com) first points a questioning finger at Graham.

“Let’s have a real investigation of the rumors about South Carolina Republican Senator Lindsey Graham, who … has been rumored to be gay for years,” Signorile says. “Like Larry Craig, Graham has voted antigay — including for the federal marriage amendment — while people in South Carolina and Washington have discussed what some say is an open secret for a long, long time.”

Graham isn’t the first South Carolina politician to face such questions. While other names are omitted from this story because they aren’t at the center of national speculation (thank your lucky chinos, boys) they’ve reached some of the most influential seats in state politics.

Charlie Smith, a West Ashley realtor who ran for the Statehouse twice as an openly gay man, says that he finds it laughable when activists suggest that gay South Carolinians should show political leaders that they’re no different from straight people. “They know exactly what it means to be gay,” he says. “They just don’t have integrity.”

Fortunately for them, what they do have is a gay community content with leaving the rumors for cocktail hour chatter and not front page scandal.
“I’m not a believer in outing,” Smith says. “People have a right to deal with this in their own time.”

He has also let opportunities go by when he could have challenged these officials about their sexuality. “It can be very detrimental in politics to back people into a corner,” Smith says. “Even when they’re acting against their own self interests and mine.”

That said, he warns that the tightrope these closeted politicians are walking is thin and that positions harmful to the gay community could prompt activists to address the hypocrisy, much like they have in the Craig case. “They know we’ll fight back,” Smith says.

The comments about Graham are not new, but they haven’t seen this kind of prominence since Graham’s 2002 election to the U.S. Senate. Early in the campaign, state Democratic Party Chair Dick Harpootlian said Graham was “a little too light in the loafers to fill Strom Thurmond’s shoes.” He later said he didn’t know what “too light in the loafers” meant. Apparently he didn’t know what too thick in the head meant either.

During a debate, Democratic candidate Alex Sanders also seemed to frame a question about Rudy Giuliani’s endorsement as an indictment on Graham’s personal life. “(Giuliani’s) wife kicked him out, and he moved in with two gay men and a Shih Tzu. Is that South Carolina values? I don’t think so.”

The renewed movement to question Graham’s sexuality won’t chink his armor in front of South Carolina voters, says Jack Bass, a political science professor at the College of Charleston and co-author of Strom: The Complicated Personal and Political Life of Strom Thurmond.

With rampant calls for a primary opponent to challenge Graham next year, it likely won’t be the Dems that Graham has to be concerned about with the gay-baiting. While many in the Democratic Party have reveled at the scandalous exit of Sen. Craig, a long-standing opponent of gay rights, the most vocal calls for his ouster came from his own party, including presidential candidate John McCain, Graham’s Senate BFF.

The pattern seems to be that you don’t come out until befallen in scandal, what with New Jersey Gov. Jim McGreevey’s hiring his honey, Congressman Mark Foley’s chasing former pages, and pastor Ted Haggard’s paying for “massages” and meth from gay hookers.

But former Ninth Circuit Solicitor David Schwacke was outed through a GOP smear campaign. When anti-gay leaders in the GOP caught wind that Schwacke was gay, they pressed him to resign. When he refused, they accused him of using office computers to search for sex online. The charges proved baseless and Schwacke continued to serve until being unseated in the Republican primary. Looking back, Schwacke says some good did come out of it — his freedom. “I probably was not going to come out voluntarily,” he says. “At least not with that kind of timing.”

Considering the state’s recent same-sex marriage ban, gay politicians see good reason to stay in the closet, says Truman Smith, president of the South Carolina Log Cabin Republicans. But he says there will be a day when politicians won’t bury their sexual orientation — once the next generation rises to power without the requisite hangups over gays and lesbians (or potentially asexual loners, for that matter).

“On most issues, politicians don’t lead the way, they lag behind,” he says.