From HIVE to Thrive 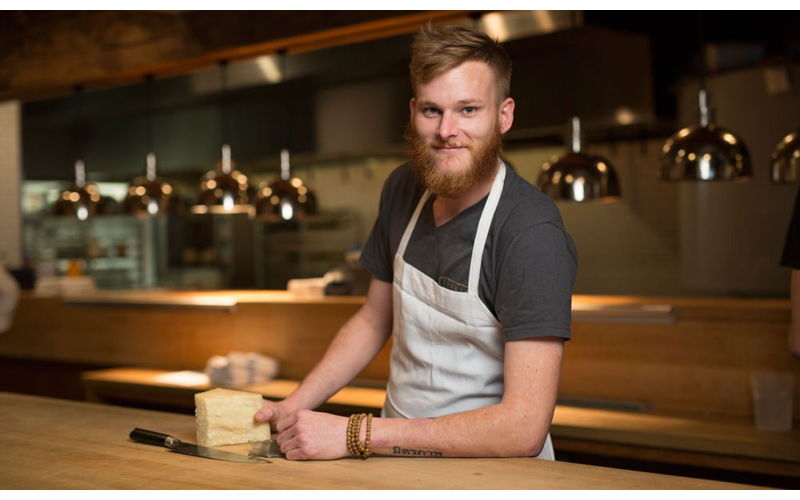 “What if you ate cat food… and you were allergic?”

The first grader asking him the question leans back, satisfied. She and her classmates sit obediently in chairs watching Getzewich talk about the snack their teachers are about to give them.

Getzewich is speaking to a series of classes, from kindergarten to third grade, on healthy snacks. The talk at the Carolina Voyager Charter School on Race Street is the first in a series for the HIVE program that is Getzewich’s brainchild. HIVE stands for hope, initiative, vision and education.

Getzewich designed the children’s nutrition education program in an effort to save kids from making the same poor food choices he made during his childhood.

Back at Carolina Voyager, Getzewich has made a healthy snack of celery sticks dipped in homemade yogurt and served with a cup of baked Goldfish crackers. He’s showing children how to dip the celery in the yogurt and then use the now-sticky celery to “fish” in the cup of Goldfish crackers.

To prepare for Getzewich’s visit, teachers have shown the children a video of how yogurt is made and done an experiment with them in which the porous celery absorbs food coloring and changes color.

“We’re just like the celery,” Getzewich tells the kids. “Whatever you put into the celery, like color, it absorbs. Putting good things into your body is like that.”

“Can you double-dip?” one first-grader asks.

Getzewich’s answer is yes, because each child has his or her own cup. The kindergartners want to know about foods other than celery.

“How do you make salad?”

“How do you make pancakes?”

“How do you make hamburger?”

Getzewich patiently answers each question until one child asks, “How do you make hot dogs?”

“You don’t want to know,” he says, prompting laughter from the teachers in the room.

When one of the first-graders asks him if it’s okay to eat candy a couple of times a week, he explains, “It’s all about balance.”

Later, he confesses, “That’s been my struggle my whole life, balance. A good balance between too much and not enough. Finding that balance is much of what I do as a chef.”

“I didn’t used to like celery. Now I do,” says one child.

That conversion is what Getzewich is looking for, having gone through a similar transformation with spinach when he was young.

Walker says it helps that the school has planted a garden, bringing even the youngest into the planting and harvesting. Thanks to the school garden, the students have tried collard greens, lettuce wraps, and spinach chips. Walker says the hope is to get the kids asking their parents for these healthy foods.

“It’s important for them to understand what is on their plates from seed to food,” Getzewich says.

The second-graders seem to be very interested in the possibilities of what can be done to make the healthy snack even more appealing.

“I love your food. It tastes good!”

“I love this yogurt!”

“Can you make cake flavored yogurt?” one second grader asks, setting off a chain of head-nodding among his classmates.

Getzewich plans to continue the program at Carolina Voyager once a month, focusing on a different ingredient each time. Principal Walker hopes the chef will focus on pecans, which grow on the small campus and fascinate the children. Getzewich is wary of nut allergies, but he says he does plan to change the class format so the children get to be a little more hands-on.

He would like to get more chefs and more schools involved in HIVE, and he says he can envision a time when the HIVE kids help choose the ingredients for one of Indaco’s pizzas, maybe even using some of the proceeds of the dish to give back to a HIVE school.

Meanwhile, the HIVE pollination has begun. “I’m going to eat this at home,” a first-grade girl says confidently to the girl sitting next to her. “I’m going to make it!”