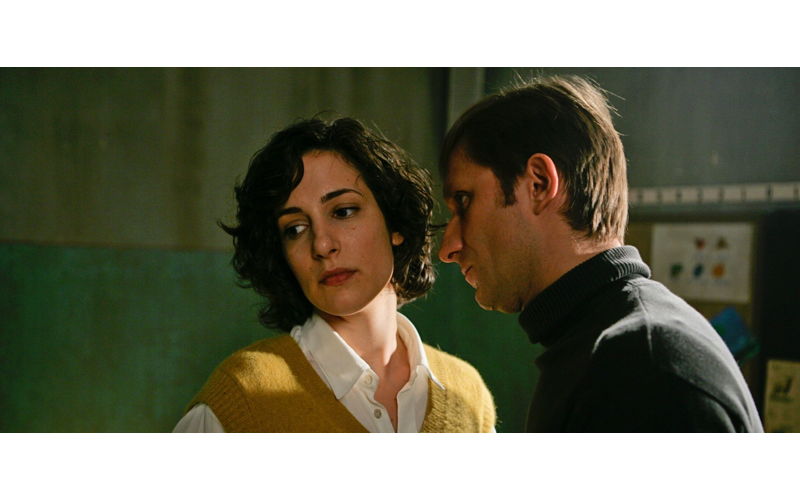 You’ve got to hand it to Brangelina: They work the red carpet like nobody’s business, have adopted half the world, and build houses for Hurricane Katrina victims in the Lower Ninth Ward, and make films about the positively retro Bosnia-Herzegovina conflict, a war that has often been usurped by fresher, comparable genocides in Uganda or Sudan.

In the Land of Blood and Honey could be the last film you’d expect to come from a high-profile starlet with unlimited resources at her disposal like Angelina Jolie. And yet, her directorial debut is engaging, disturbing filmmaking — with the atmosphere of European art-house fare — about a conflict most of us have forgotten. History likes to conjure up the Holocaust as evil’s end game, but the Bosnian War from 1992 to 1995 proved that civilized people committing horrific acts in the name of ethnic purity is as cyclical as the rising and setting of the sun.

In the Land of Blood and Honey opens as the lovely Bosnian Muslim painter Ajla (Zana Marjanovic) has a rendezvous in a crowded nightclub with Serbian policeman Danijel (Goran Kostic). The two are clearly deeply infatuated. Four months later, all normality has crumbled and the country has plunged into a nightmarish civil war: An army of Serb soldiers begins its process of “ethnic cleansing” of Muslim citizens, a warped vengeance for a blood-soaked history of conflict between Serbia’s warring ethnic factions.

Filmed in the Bosnian language with a cast of largely unknown actors from the region, In the Land of Blood and Honey has the tang of veracity to it. The Muslim residents become captives in their own apartments. Any attempt to leave to find food or medicine means they will be picked off by snipers waiting to kill them. In a round-up of Muslims, the young men are taken away and immediately shot within earshot of the women, who have a more prolonged horror in store. The soldiers round up a group of them, including Ajla, to serve as cooks, maids, washerwomen, and sex slaves.

With a horror reminiscent of the concentration camp tactics of Nazi soldiers, the Serbs torment, rape, and humiliate the women trapped inside their nightmarish camp. Ajla is spared the worst of it because Danijel is now a Serbian soldier at the camp. He is in the uncomfortable spot of being a pacifist at heart, reluctant to shoot any of the civilians his sniper duty demands, but he has a warlord father, General Nebojsa (Rade Serbedzija), who has made backing down a virtual impossibility. Danijel protects Ajla but also sets up the eerie, troubling bargain played out in the film. His protection is wrapped up in a sexual and romantic relationship that seems unbalanced at best. It’s a psychologically fraught situation that becomes even more sinister later.

Ajla eventually escapes the rape camp and reunites with her sister and fellow Bosnian-Muslims. But when Danijel learns of her whereabouts, he sends for her, under the pretense of wanting an artist to paint his portrait. The couple again enter into a relationship with an undercurrent of manipulation and control. Danijel keeps Ajla secreted away in rooms within a Serbian military complex. A horrifying predicament sure to implode, she is surrounded by Serbian soldiers who won’t hesitate to rape or kill their Muslim enemies and question their commander’s relationship with this “enemy” woman.

In a very clever script that Jolie also penned, she has crafted a war film that could have been a succession of battles and increasingly depraved violence into the realm of a psychological drama. And as a war film made by a woman with a demonstrated interest in humanitarian causes, In the Land of Blood and Honey is also a passionate tract about the grotesque use of sexual violence against women as a commonplace tactic in modern warfare.

How you feel about the film’s ending will depend on your perception of the troubling love story at the center of the film. The unequal relationship between the powerless, trapped Ajla and the powerful Danijel, who holds life and death in his hands, complicates this notion of a love story in wartime. The complexity of the Bosnian conflict is illustrated by the strange captive-and-captor relationship that develops between two people who ostensibly love each other, but can’t wriggle out from beneath the burden of history and ethnicity. In the end, In the Land of Blood and Honey is a surprisingly ambitious, nuanced study of the collision of human psychology with the black-and-white lines war presumes. All from a glamourzon Hollywood actress you wouldn’t, frankly, expect it from.