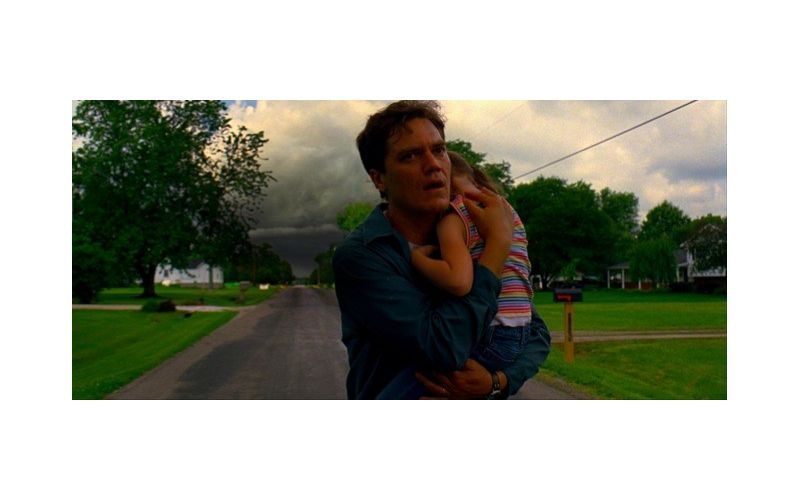 The World As We Know It

Set in a rural Ohio of backyard rubbish piles and church suppers, Take Shelter is a skin-crawling heartland thriller in which visions of disaster haunt family man Curtis (Michael Shannon). In his dreams, Curtis sees masses of starlings swoop across the sky and then fall to earth as if poisoned. Strangers lurk outside his family’s home and violently abduct his small daughter; tornadoes appear on the horizon and the sound of thunder is audible on a clear day — but only to him. With time, the nightmares that leave Curtis drenched in sweat and afraid of what’s to come begin to intrude on his waking life. He looks at the family dog and even his wife Samantha (Jessica Chastain) with a new sense of distrust. Against all logic and reason, Curtis becomes convinced that the best protection from these visions of doom is an underground backyard bunker. With a growing mania, he shops for gas masks, stockpiles canned goods, and takes out a home improvement loan to outfit his family’s escape hatch in the cold, damp earth.

Though much is kept below the surface, there is ample evidence that Curtis’ delusions have been brought on by the same real-world stresses that laid his mother low with her own psychotic breakdown when Curtis was 10. For a good portion of this deeply disturbing but trenchant thriller, director Jeff Nichols offers a plausible look at what dawning schizophrenia might feel like, while the phenomenal Shannon delivers an eerily believable portrait of what appears to be a man essentially losing his mind.

Part of Take Shelter‘s slow-building impact is in that head-swimming ambiguity. Is the origin of Curtis’ fear truly psychological? Or is it environmental? Economic? Biblical? Nichols builds a sensation of dread by offering up those questions without clear answers. The fact that Curtis works for a mining company and drills holes into the ground for a living suggests some return of something repressed or of nature seeking her revenge. But, just as likely, real-world stress is to blame. Nichols gives multiple indications that Curtis has genuine reason to panic: His vulnerable, deaf daughter Hannah (Tova Stewart) needs a cochlear implant that their health insurance may or may not cover, and as the sole breadwinner, his family’s feast or famine rides on Curtis’ shoulders. If Stanley Kubrick’s 1980 The Shining was a horror film about a father indulging fantasies of rage and revulsion directed at his own family, then Take Shelter is a horror film about paternal love. The terror at the heart of it rests in a decent man’s growing fear that he is losing control and will soon be unable to protect his own family.

There is such a thing as an ordinary waking nightmare, and for many Americans, it is lived every day in job loss and medical hardships, concern for one’s children, and healthcare disasters. The film’s emotional wallop comes in its realitistic effect: Who hasn’t at some time or other dealt with any one of these crises, from fear for your child’s safety to economic anxiety, and felt the earth slipping out from under them? Curtis’ hole in the ground isn’t merely protection from the storm, it’s an indication that he may be digging his own grave, yearning to escape the traumas building around him permanently.

Michael Shannon, an unsung thespian force of nature who rips a hole through every film he has appeared in, offers a brilliant performance here. From the furious schizophrenic he played in Revolutionary Road to the deranged band manager in The Runaways, Shannon defines the unhurried emotional agony of this story. He is haunting to behold but also pitiful in his helplessness before his obsessions. As his mystified but stalwart wife, Chastain offers a portrait of married devotion rarely seen in film. Most screenwriters would have written Samantha as a harpy who can’t wait to flee the family nest at the first sign of trouble, but in Nichols’ and Chastain’s layered portrait, she becomes something more, fierce in her loyalty to her husband and showing a core of resolve that gives remarkable depth to her rural housewife.

It is the season of cataclysm apparently, with Lars von Trier’s Melancholia (see review, page 50) and the indie Another Earth also offering up tales of environmental doom and interplanetary mayhem. But Take Shelter stands apart for capturing the real sense of horror and fear in the many cataclysms of contemporary life and for instilling a sustained sense of dread and fear. Its only fault is Nichols’ dispiriting ending. He appears to have written himself into a corner with a conclusion that seems to back pedal and offer a fairly conventional rationale for Curtis’ night terrors. While not exactly a happy ending, it’s less distressing than the one you might have imagined. And sometimes the best thing about a spellbinding thriller is not explanation, but allowing lingering questions to remain unanswered.