In its third year, the Charleston to Charleston Literary Festival has found its stride. And it’s a big one. 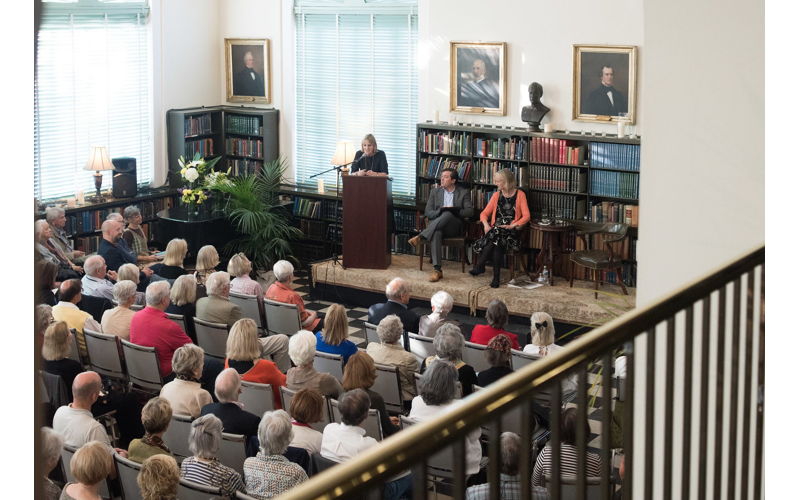 “Third time’s a charm,” so they say. But when the first and second times were plenty charming already, maybe the third is some other magnitude of allure — a dazzle, a delight, a happy humdinger? Lucky for Charleston, we’re about to find out.

The third edition of the Charleston to Charleston Literary Festival launches this week, with a lineup of literary illuminati like the city has never seen before, at least (to my knowledge) in one place and time. This year’s four-day event offers 14 different sessions, all held at The Dock Street Theatre. “We’ve got Pulitzer Prize winners, the New York Times science writer as well as the former editor of the New York Times, a National Humanities Medal winner. There are historians and filmmakers and of course Joyce Carol Oates — need I say more? But that’s just the beginning,” says the festival’s director, Leah Rhyne.

Other headliners include Rebecca Makkai, whose recently released novel, The Great Believers, is staking out all sorts of turf on best-seller lists, and David Blight, whose Frederick Douglass biography won this year’s Pulitzer in History. But the genius of this festival is the matchmaking that goes on. Leah Rhyne, the festival’s first full-time director, explains: “Charleston to Charleston is unique in that each session is a conversation, a dialogue, between featured authors and other writers or experts in their field,” she says. So despite that fact that Blight could surely hold his own, he’s paired with local author Judge Richard Gergel, whose book Unexampled Courage was published to much acclaim this year, and who is a draw in his own right.

This interactive format not only delivers a two-fer of star power (and on panel sessions, even more than that), it adds an air of lightness and liveliness, so rather than being on the receiving end of a lecture, one is privy to great minds churning and turning in real time. Brilliant banter, if you will, with the participants playing off of one another and sometimes challenging one another. Wit abounds — which one would expect from a festival with British roots.

Indeed Charleston to Charleston is a transatlantic affair, in which the Holy City hosts the U.S. counterpart to the long-standing English festival held at Charleston in Sussex, the Bloomsbury Group’s rural outpost for out-of-the-box thinking and creative blooming. Each year the Charleston to Charleston version has become more established in its own right, thanks to artistic direction by Diana Reich, who oversees the speaker invitations and program planning, delivering up a little something for everyone, from current affairs to politics to the Harlem Renaissance and war-torn Holland and beyond.

Though there is overlap in some of the authors and presenters, our festival has its own particular flair and feel. “Largely that’s because we’re a four-day event, not 10,” says Rhyne, and there’s a Charleston hospitality component to the festival here, with speakers feted at cocktail parties in South of Broad homes, in addition to an opening night party open to all.

“There are opportunities to really get to know these writers and terrifically interesting people. I think of it as a salon. To me the festival shows off what is so special about Charleston — this blend of hospitality with delightfully engaging conversation about books and art and a broad range of ideas,” adds Suzanne Pollak, Charleston to Charleston’s director of development. As a 501(c)3, the festival depends on donors to offset costs, so ticket prices can remain low ($25, with a few at $35). “It’s important for us that it’s accessible to everyone,” adds Pollak, noting that students get a discounted rate.

On Saturday afternoon at the Dock Street, New York Times science writer Carl Zimmer, also a frequent NPR commentator and Yale lecturer, will take the stage in conversation with College of Charleston biologist Melissa Hughes. Zimmer is also the author of 13 books, the most recent of which, She Has Her Mother’s Laugh: The Powers, Perversions, and Potential of Heredity has been a best seller on both sides of the pond, which he’ll draw from for his session of the same title. “Most people are familiar with the idea of heredity, or think they are, especially in this age of DNA testing and ancestry tracing, but it turns out that it’s wonderfully mysterious and full of surprises,” says Zimmer, who is looking forward to his inaugural visit to the city. As Charleston looks to its own history and heredity on the heels of the International African American Museum groundbreaking, it’s a timely topic. “I hope to get people to reflect on what heredity really means to us, especially now as the field of genetics is rapidly changing.”

Zimmer’s talk is followed by David Blight and Gergel discussing Frederick Douglass — one of the sessions that Zimmer, who interestingly was an English major in college and is not a scientist by training, is particularly interested in. “I actually write about Douglass in my book. About how he challenged the concept of a hierarchy of people as defined by race,” Zimmer says. “He was very aware of how damaging that was, and dedicated much of his life countering that aspect of heredity and ancestry.”

Weekend Roundup: 25+ events going on in Charleston this weekend