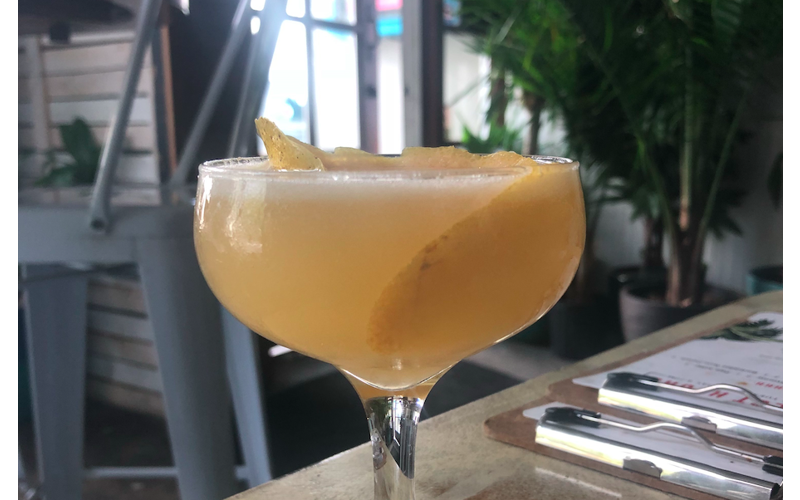 A true Hemingway “drink” would probably be a shot of absinthe followed by a fifth of rum, consumed at dusk on the edge of a Michgian forest, head in hands.

Endeavoring to write “one true sentence” will drive ya to the bottle, folks. Legend has it that the bar credited with creating the Hemingway Daiquiri, Havana’s La Floridita, had to shake up the white rum, grapefruit juice, and lime cocktail to appeal to the masses — Papa’s preferred libation was a daiquiri, “hold the sugar, double the rum.”

While the long-suffering writer may have ordered his namesake drink a little stronger, lushes the world over can attest that a well-made Hemingway Daiquiri is the best iteration of the classic cocktail.

With Fri. Aug. 16 being National Rum Day (who knew?) we decided to embark on on a mini Hemingway Daiquiri crawl, stopping by three joints we knew would make Papa proud: Cane Rhum Bar, Proof, and The Royal Tern. Each spot serves very different versions of the famous cocktail, but each nod to the writer in some way.

The ingredient ratio and serving style (up or over crushed ice) can differ slightly depending on who’s behind the bar, but typically a Hemingway Daiquiri is made with two oz. of white rum, 3/4 oz. fresh lime juice, 3/4 oz. freshly squeezed grapefruit juice, and 1/4 oz. of Maraschino liqueur, shaken and strained into a coupe glass, garnished with lime.

Unlike Proof and Royal Tern, Cane’s cocktail list does not include the Hemingway Daiquiri. They have a pineapple version, befitting their tropical proclivities, but owner Paul Yellin assures us that if they have the right ingredients, they can shake, stir, and pour any drink your heart desires. “My object is to help you get what you want,” says Yellin.

Yellin is a hellofa rum guru — step off of East Bay into Cane and gaze up at their shimmering collection of over 100 uber rare and uber popular rums. He explains that the same way chef’s hold dear the mirepoix or “holy trinity” of onions, celery, and bell peppers, daiquiris follow a similar rule. “Rum, lime, sugar — and not sweetener,” he clarifies. There’s a big difference between a high fructose corn syrup-infused concoction and one that uses brown sugar.

When you sidle up to the Cane bar, expect to bump into regulars who visit weekly for their “what did you just get in” rum fix. It’s loud — the tropical beats make the smiling bartenders hard to hear, but lean closer. Ask for Vincent or Scott and request a Hemingway Daiquiri. Made with Plantation Three Stars white rum as the base and garnished with a peel of fresh grapefruit, Cane’s version of the drink is superb. Served up, it’s more pale golden than blush in color and there’s still a hint of foam on top — Scott shakes and pours right in front of your face.

Not saccharine or “sugary,” the drink is still a touch sweeter than other Hemingway Daiquiris, but pleasantly so. The bar and restaurant, which just celebrated its third birthday in August, is purposefully built — the music, the decor, the Hawaiian shirt-clad ‘tenders — to be an escape. A rum drink like this will keep you in your seat for hours, until you feel that maybe you have somehow wandered into that Hemingway forest, head nodding to chest.

Proof owner and master mixologist Craig Nelson says he likes their version of the Hemingway Daiquiri because, “It’s a classic. I like the dryness of it.” He also notes (and after our visit, we can attest), “it’s a great drink to have six of!”

The King Street cocktail bar will make you the best Sazerac, Last Word, and French 75 cocktail you’ve ever put to your lips. They can also get you the Jack and Coke or Bacardi and Pineapple you’ve been hankering for (it’s King Street, after all). At 4 p.m. on a Wednesday you’ll find customers ordering both, with Lover Boy jams pumping and the A/C blasting.

Proof’s Hemingway Daiquiri, made with Cana Brava rum, looks the most like what you see when you Google the drink — the perfectly cut lime round sits atop a coupe glass with a light pink hue. It’s beautiful and, like Nelson says, very dry. The booziest of the bunch, we’re not sure if Hemingway would need to request a “Papa Doble” after all.

Our final stop takes us to Johns Island, where Royal Tern bartender Jamie Price admits she too is a bit of a Hemingway fan. She says she studied cocktail books dedicated to the writer’s love of drinking, like Philip Greene’s To Have and To Have Another, plus his own work — A Moveable Feast is a journey across time and place, marked by what one drank and with whom.

When she designed the cocktail menu, Price says she wanted the drinks to emulate the way Hemingway wrote — true sentences, purposeful creations. Price’s version of the drink is the only one served in a short and stout goblet filled with crushed ice — the same crushed ice used for the restaurant’s expansive raw bar. Made with Cru white rum, Luxardo, a splash of triple sec, and fresh lime and grapefuit juice, the Tern’s version should be enjoyed at the long, lively bar with half a dozen oysters. We think Papa may have liked it here best of all.