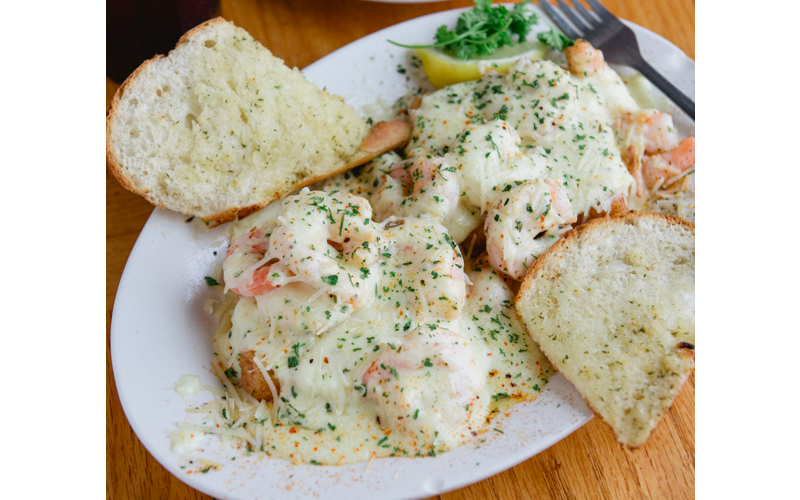 Every decent Charlestonian I know carries with them a strong belief that Hyman’s Seafood is a vile tourist trap that they wouldn’t step foot in, not even to buy a camouflage koozie from their general store. They certainly wouldn’t order the Carolina Delight, a dish that sounds more like a Myrtle Beach-based lingerie football franchise than a menu staple.

I can’t front — I get mildly offended at the hostility directed at Hyman’s. Before brunches at The Dewberry and dinners at Renzo, Hyman’s was the first place in Charleston I’d ever dined, two decades ago. Whenever these naysayers spew their disdain, 10-year-old me can’t wrap my mind around their hateful logic. Every time I go home to Southport, N.C. I make it my business to dine at Provisions — a quintessential tourist trap. I immerse myself in the throng and enjoy pre-frozen conch fritters and pitifully weak Mai Tais just like the vacationers from Vermont and Kentucky. Perhaps the citizens of Charleston should tone down their hoity-toity airs and realize there is a reason why Hyman’s has been booming for 32 years. Before Brock, before FIG. Before anybody not looking for trouble would even stroll down that stretch of Meeting Street. If nothing else, I praise Hyman’s for being an edifice for the hungry populous and not becoming a fly in the buttermilk, having to cater to the city’s elite.

To be fair, the brand of folks who’d typically order the Carolina Delight are the same ones who spill Sour Apple Four Lokos in hot tubs and wreck mopeds on Ocean Boulevard in Myrtle Beach. (Writer’s note: There’s really a restaurant on the second floor of the Holiday Sands Hotel in Myrtle called Carolina Delights).

These folks don’t feed into the hoopla of artisanal macarons. They’re the regular Nine-to-Fivers who work their asses off at gas stations and middle school cafeterias so that maybe, possibly, they’re able to take a weekend jaunt to Charleston, walk up that spiral staircase, and dine the same tables where a miniature bronze plaque claims “Oprah Winfrey ate at this table.”

I know many Charlestonians prancing around the peninsula consider this dish to be well beneath them, so allow me to give you quick pep talk:

Spanglish chef Tomas Prado gets giddy with glee about the bourbon chicken from the food court staple, Kelly’s Cajun Grill. Kwei Fei’s David Schuttenberg loves deep fried Spam fries, and frequent James Beard Foundation semi-finalist flyer Cynthia Wong has described herself as a “patty melt type of gal.” Please understand that your favorite chef will gladly denounce anything Escoffier ever said for the sake of a messy sloppy Joe. The lesson within this is, no matter the culinary pedigree, all is fair when it comes to matters of the gut. If it’s delicious, it’s delicious, whether it be squid ink bucatini or the orange pack of “chicken flavored” Top Ramen noodles.

Hyman’s menu describes the Carolina Delight as shrimp and grits “taken up a notch.” That claim alone is reason to cause upheaval throughout the Lowcountry. For $9.95, those who order the Delight are served a lightly fried grit cake topped with a choice of shrimp, salmon, or salmon croquettes. You can even add cheese or bacon for $1.95. The creamy Parmesan sauce is free.

While doing my research, I did come across a bevy of reviews of the dish that reveal a nuanced love/hate dynamic. Purists would start their hate with proclaiming grit cakes to be an annoying trend — sort of what auto-tune was to hip hop. I’ve heard complaints that the shrimp were rubbery and speculation that they were foreign-bred, that the alfredo sauce was goopy and possibly from a jar, but I couldn’t find anybody who said it wasn’t delicious or at least satisfying.

I wish I could lie and give you some elaborate backstory about the Carolina Delight, but we can assume its origin is fairly rudimentary — ownership must’ve simply peeped out a way to cash in on an already celebrated dish. And there’s no harm in that. In the words of Jay-Z, “You can’t knock the hustle.”

The recipe isn’t coveted. It wasn’t passed down through generations — actually, there’s a recipe for it in the March issue of Lowcountry Magazine. Perhaps, if the menu promised diners that the shrimp were sourced directly from the nearest body of water, if the grits were hand ground in-house with a mortar and pestle, and the Parmesan cream sauce were called “Bechemel del Parma,” only then would Charlestonians see it fit to dismount their high horses and give themselves a chance to be delighted.

It was legendary chef Robert Stehling, of the now shuttered Hominy Grill, who blessed the Holy City with perhaps the most beloved version of shrimp and grits. Stehling got the backbone of his recipe from chef Bill Neal of Crooks Corner in Chapel Hill, who is widely credited with nudging shrimp and grits from a humble fisherman’s breakfast into something eaten on fine China, on top of white tablecloths with polished silverware. I say all that because, since the unfortunate closing of Hominy Grill, the Carolina Delight at Hyman’s is currently sitting on Charleston’s shrimp and grits throne. If you’re still wary — give it a try, you may even score a koozie on the way out.