These Charleston podcasters have a lot to talk about 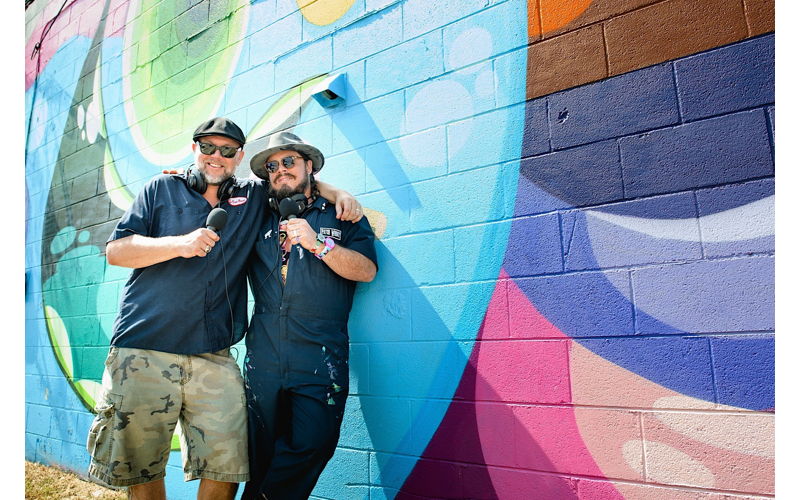 If you’re like my friends, you either listen to zero podcasts or your AirPods are always within arm’s reach. For those of us who fall into the latter camp, we are not alone. These programs are no longer just trendy passion projects for bored extroverts with microphones, either. They’ve become big business. The folks over at NPR — who laid the foundation for podcasts before iPods were a thing — predict that podcast sponsor revenue will surpass broadcast sponsorship revenue for the first time in 2020. (Waiting for that tote bag, Lakshmi.) In recent years, Charleston has seen a growing and diverse group of locally produced podcasts, some by familiar faces and some by people who prefer to stay behind the mic.

[content-2] This week, we’re taking a look at a few of those local podcast producers and working to compile a comprehensive list of local shows for your listening pleasure. We’ll be updating this list online at charlestoncitypaper.com/podcasts. And stay tuned, you’ll be hearing from some of your favorite City Paper contributors very soon.

Friends Jon Perry, Nicole LaPorte, and Jen Collins offer a bit of levity to some of history’s most famous killings with their show, Talk Murder to Me. Recorded in the spare bedroom of their Mt. Pleasant home where they all live, the trio notches thousands of downloads each week and even hosted a sold-out live show at Frothy Beard Brewing Co. last month, with two more planned in Savannah and Charlotte. Perry initially started the show on his own as a creative outlet, knowing that many combat veterans like him struggle without finding ways to cope. But after some experimentation, the three-person format stuck. Perry still handles the research upfront, seeking out primary source documentation of crimes near and far, obscure and front-page. Don’t assume that Talk Murder to Me is a cookie cutter true crime clone: None of the hosts say they listen to My Favorite Murder, probably the closest comparable popular podcast. But, like the mega-hit show, The TM2M crew has attracted their own legion of fans, with paying “Talko Supremo” supporters scattered all over the globe.

There’s a lot of true crime out there right now, what did y’all draw inspiration from? How is TM2M different?

Jon: A lot of [true crime podcasts] just kind of hit the surface … For my standards, I have to dive as deep as I can into a story, into the background, etc., and I think that shows on the podcast. If you do a ton of research on a story and they can ask questions and then I have an answer for that because I actually know a lot more than just the first layer, it gives substance to it.

Jen: Also the comedy aspect, too. A lot of people have the true crime and it’s just the crime, but we want to have fun with it. … A couple of listeners have described [the show] as hanging out with friends at a bar or around a campfire. We want to have that genuine feeling with our listeners, because that’s the way it is with us.

On the mic at the Ohm Radio studio where she records, grassroots activist and advocate Tamika Gadsden brings an unmistakable confidence to the airwaves with her show Mic’d Up, shining a light on parts of Charleston’s culture and power structure that may not often get much attention. Off the mic, Tamika is humble, if determined, to carry her message by whatever means necessary to reach Charlestonians eager for a more fair and equitable city. Interviews range from hearing about the immigrant experience to well-funded infill development downtown.

Why’d you start the show?

Like a lot of my work, I just want to heighten the level of political discourse here and democratize media here. We have the City Paper, we have the Post and Courier, and you have various other news sources, but I wanted something that was of the people. I wanted to speak from the perspective of a child of Jim Crow refugees, I wanted to speak to the black experience here.

I wanted to take my lived experience of living here at one point — after being born and raised in New Jersey — going back to undergrad in the New York area. I wanted to use all that lived experience, and my reverse migration back to kind of just reach and share that with people and create community. It was just a void. I think a lot of times this city loves to hold up a black messianic figure, they just gravitate toward a lot of men … It almost positions the black female voice as just a supporting cast member. And I feel like black femme voices should be prominently placed in media here.

Charleston-based food writer Stephanie Burt has amassed an enviable collection of interviews on The Southern Fork — her podcast of candid “unscripted kitchen conversations” with on-the-ground leaders in the Southern culinary world. More than 140 episodes strong at this point, Burt uses her show not just to showcase the dynamic array of personalities and businesses, but to “invite people to the table” to unite observers with a world that can seem walled-off.

Longtime listeners of The Southern Fork have witnessed the show’s growth over the years, but Burt retains the same earnest desire to connect with her guests as she did in episode one in 2016 (with former Hominy Grill pastry chef Christina Hagen, BTW.)

What are your long-term goals for the show?

The purpose of the show is to help the person or persons sitting across from me feel like they’ve been heard. It’s also, simply, to help any listener who is listening to the show feel like less of a stranger when they go out to eat or they enjoy food in the South. So, it’s a community building exercise. For myself, [my goal is] to continue to learn how to listen.

What have you learned about the podcast and running a business?

I assumed when I started that it was the same as interviewing for writing and it isn’t. So that arch of knowledge has been a fun challenge to take on creatively.

For the first two years I just went at it. I got a few sponsors, because, you know, I wanted to get paid for that time. And I basically created a prison, which I had never even thought about. “Oh my god, every Friday for the rest of my life?” … I thought, “Is this a hobby?” Because I thought that this is now turning into a vanity project that I’m now in a prison with … I thought about quitting, which is why last year I did every other week. Because I needed to give myself time to look at it as a business, as an entity, not just be the content creator … I had not provided myself time to create long-term goals, have a business plan, any of that.

That gave me time last year to work on sponsorships and try to really, say, “How does this work as a business?” So now I’m back to every week, but I have a season. My season will end in mid-January and season five will debut the Friday of Charleston Wine + Food. So it gave me about five or six weeks to chill.

Artist Patch Whisky and buddy Dan “The Man” Anderson started pulling in friends and colleagues from the local arts scene in 2018 and are now almost 30 episodes deep into their podcast, Best for Business. (The two are huge wrestling fans, and the show’s name is an homage to a WWE villain, just in case that one passed you by.)

Every episode is structured with a 30-minute interview with the guest by Dan on the front end, and capped with some off-the-wall inquiries from Patch. Think: random-ass kinds of probing questions designed to give you a peek into someone’s instincts on topics like favorite dinosaurs and sandwich preferences.

Why did y’all start the podcast?

Dan: We were just hanging out one night up at DIG in Park Circle and somebody said to us, “Gosh, you guys should do a podcast.”

Patch: Well, I’m an artist and Dan is huge into the arts community and his wife [Becca Anderson] is in theater. So we already have all these people that we can touch base with.

Dan: A bunch of friends that we just knew right off hand that were tremendous artists … we started spreading the word and people were like, “Heck yea, we’d come and join you on a podcast.” And now it’s hard to even schedule everybody.

Another awesome part of it is connecting people … It’s nice just having everyone from our little network of people being able to help each other out.