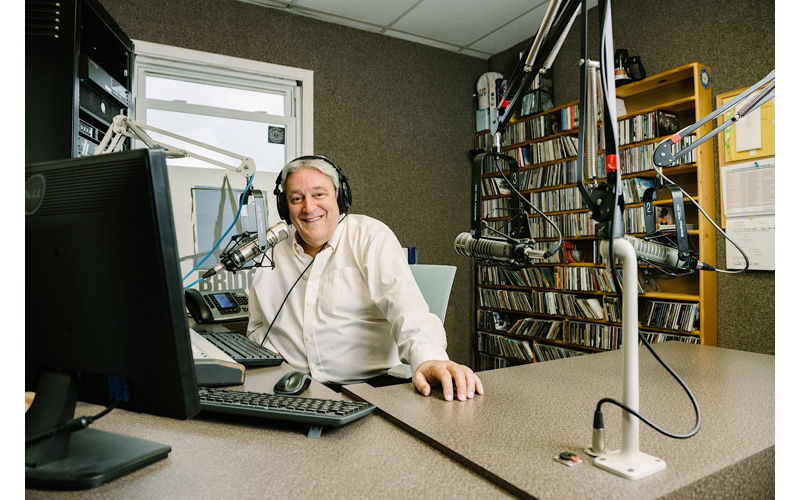 On Oct. 28, radio talk show host Richard Todd made his return to Charleston’s airwaves, on 105.5 the Bridge, after a seven-year hiatus from radio.

Longtime local radio listeners know Todd. Between 1991 and 2012, Todd was a popular personality on several radio shows in the area, including TnT in the Mornings and the Morning Buzz. His mixture of advocacy and character allowed him to break out of the typical talk radio host mold, exemplified by the millions of dollars he’s raised for various charities and his 1994 petition to allow for Sunday alcohol sales in Charleston County.

“Those people who listened then that are listening now are still looking for that vital, relevant, active music that’s still out there,” says Todd. “They can get it on the Bridge, but, again, it’s got to be local. A show for Charleston by Charleston in Charleston: It sounds so simplistic, but the way the radio has evolved, it’s almost revolutionary nowadays to have that.”

Todd’s new show runs Monday-Friday, 6-10 a.m. For fans of his style of talk radio, the announcement that Todd would return to morning radio, this time on 105.5 the Bridge, was a triumphant moment after a seven-year-long silence that began in tragedy.

“My wife had cancer, and she died when she was 44 years old — breast cancer,” Todd recalls about his wife’s three-and-a-half year battle with the fatal disease. “I had a 9-year-old son; he had just turned 9 when his mom died. And, it was obvious that I — there’s lots of things for after-school programs, but there’s not much for 4:30 in the morning, and it just became obvious that my focus should be on my son after my wife passed.”

On March 30, 2012, Todd left his popular show, the Morning Buzz on WTMA-AM 1250. While it could have been a complete retreat from the public eye, the host found other avenues for his voice. Todd has been the announcer for the Charleston Battery and the Volvo Car Open, the host for Earl Klugh’s Weekend of Jazz at the Sanctuary, and was the finish line announcer for the Charleston Marathon.

His most recent job was “running simulations and scenarios for medical students for things they would encounter in the real world, the OR, the ER, the ICU.”

As Todd puts it, he left radio at the top of his game, but he never felt remorse over leaving. “Honestly, I have never regretted that decision for a second,” he says. “My son has prospered as a result of that decision.”

Despite his comfortable life as a simulation expert and his occasional announcing gigs, Todd didn’t want to completely close the door on radio. And when 105.5 offered him a new talk radio show, and they were open to his ideas for how the show would look, Todd decided that it was time to step back into the booth.

“I had equity in this town. I’d been around for over 25 years on the radio, and I didn’t want to walk away from everything that I had done before and just say, ‘That’s it.’ My wife, I think, would have wanted me to give it one more shot.”

For the next chapter of his career, Todd says that he wants to give the local area a place to congregate and discuss the important topics of the day.

“I’ve always called my show over the years, ‘Charleston’s morning meeting place,'” he says. “When I was on AM, it was a little harder to achieve that because who’s listening to AM radio nowadays? But, now that I’m on FM, even more so, I want to establish that same idea: this is Charleston’s morning meeting place. We get together, we listen to some great music, we talk about what’s going on in town, we give you all the information you need for the day, we give you the soundtrack to your life.”

With roughly two-dozen shows under his belt, Todd has already interviewed his old TnT co-host Atom Tailor and mayoral candidate Mike Seekings. It doesn’t seem like it took him long before he got back into the swing of things.

Even after seven years, Todd still has the voice for radio. On Oct. 26, shortly after his return was announced, the radio personality met with James “The Critic” Voigt, another radio host who moved from WTMA-AM 1250 to 105.5 the Bridge. While Voigt reminisced on the wild times on and off the air, Todd reflected on something else.

“We had a great time, and Charleston’s so different now than it was then, but the music, still, is great and the lifestyle is still great, and this place — love living here,” he said. “And I can’t wait to get on the air and start being the morning meeting place for the Lowcountry.”