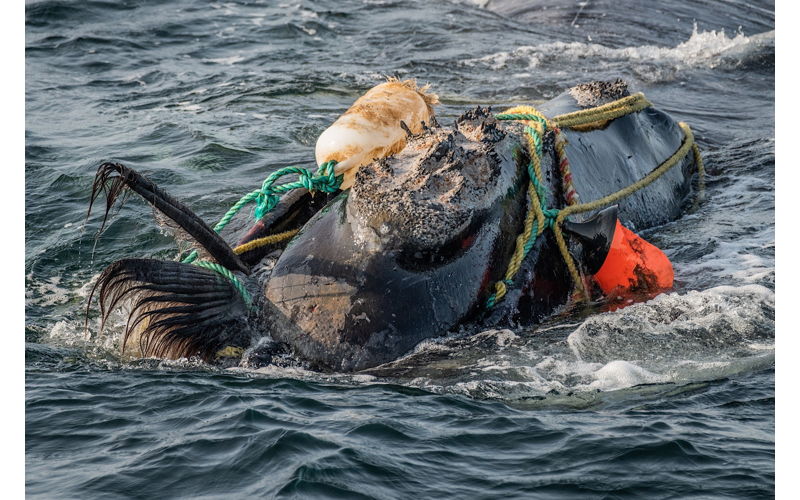 A natural phenomenon usually reserved for exotic locales, animal extinction isn’t something that many of us consider could be happening in our own backyard. But just off the South Carolina coast around this time, fewer North Atlantic right whales begin migrating south each year.

By a stroke of bad luck for the whales — majestic, slow-moving creatures that weigh upwards of 50 tons — they swim close to the shore and feed near the surface of the water, making them especially vulnerable to the perils humans have created for them just off our coast.

Consequently, these whales are one of the most endangered on Earth.

“Right whales unfortunately occupy and migrate through probably the most industrialized swath of ocean on the planet, and that’s the east coast of North America,” says C.T. Harry, the marine campaigner for the International Fund for Animal Welfare. “You can imagine the kind of threat gauntlet they have to face.”

Most North Atlantic right whales head south for the winter, according to Smithsonian Ocean, to shallow coastal waters off the coasts of Georgia and Florida, their only known breeding grounds, where they give birth to one calf every three to five years.

Once temperatures begin to warm in the spring, they migrate back north to spend the summer and early fall months feeding and nursing their calves in the waters off New England and Canada.

The near-500-mile obstacle course of fishing line, seafaring vessels, and more has led to more deaths than what the species can tolerate. In population ecology, Harry says, threatened species are assigned a figure called PBR — potential biological removal — which represents how many can die in a year for the population to continue to thrive in the wild.

Of all the causes identified, no adult or juvenile whale died due to natural causes. According to Sarah Sharp of IFAW, this is clear evidence that the whales are unable to live full, productive lives due to human interference.

“The two main threats to right whale survivorship are human-caused,” Harry explains. “We are killing these animals, and we are killing them by entangling them in commercial fishing gear and running them over with large ships.”

Historically, the annual mortality rate of North Atlantic right whales is about three to five, but since June 2017, 30 right whales have reportedly died, about a 1,000-percent jump.

“We examined a number of dead marine mammals, animals that wash ashore or are fished up, determining cause of death,” Harry says. “It really crystallized in me the threats that these animals face …

“Seeing the deep lacerations that can occur around the animal’s flippers and, in turn, seeing that hemorrhage and muscular damage and even organ damage, we are talking long-term, so these animals are basically being strangled for months long. It’s an unbelievably horrible animal welfare issue.”

Luckily, there is some good news among the threats surrounding the whales. Deaths related to vessel collision seem to have leveled off. While they are not decreasing, they are not increasing either, which is a good sign that protective legislation, such as speed restriction zones, is working.

It’s also relatively easy for the community to get involved and take an active role in the conservation of these whales. So, it’s even more imperative to be in the know.

“It’s just really important to understand the value that marine mammals have not only for the tourist industry, but to the ecosystem as a whole,” Harry says.

According to IFAW representatives like Harry, advocating and pitching policy for the betterment of the species is equally important to understanding the significance at stake in contacting your local officials and representatives.

“A lot of the stuff we do now is try to make sure these bedrock environmental laws are strong,” Harry explains. “One of the things that’s very relevant to Charleston is that Joe Cunningham has been a real champion for the right whales in his work against off-shore drilling, particularly off the coast of South Carolina.”

Cunningham has actively used his platform to advocate for the right whales, because he has a deep understanding of one of their other major threats, seismic activity and noise-related damage, both of which are exacerbated by off-shore drilling.

“If we are going to ensure the survival of this critically endangered species, we need effective policy and immediate federal action,” Cunningham said in a statement. “That doesn’t include blasting disruptive and damaging sounds every 10 seconds for a period of days, weeks, and even months.”

Cunningham’s work helping the environment is one of the reasons he says he is proud the House passed his bill to permanently ban off-shore drilling and seismic airgun blasting off the Atlantic coast.

There is another piece of legislation working through Congress right now, known as SAVE Right Whales Act — the Scientific Assistance for the Very Endangered. The bill would grant funding for collaborative research and innovation for fishing, shipping, and conservation efforts to promote new technologies that reduce the two threats of vessel collision and entanglement.

Despite the legislative efforts, bills can only do so much, as it is the fishing industries that are responsible for many of the accidental whale deaths.