How to Roll a Cigarette 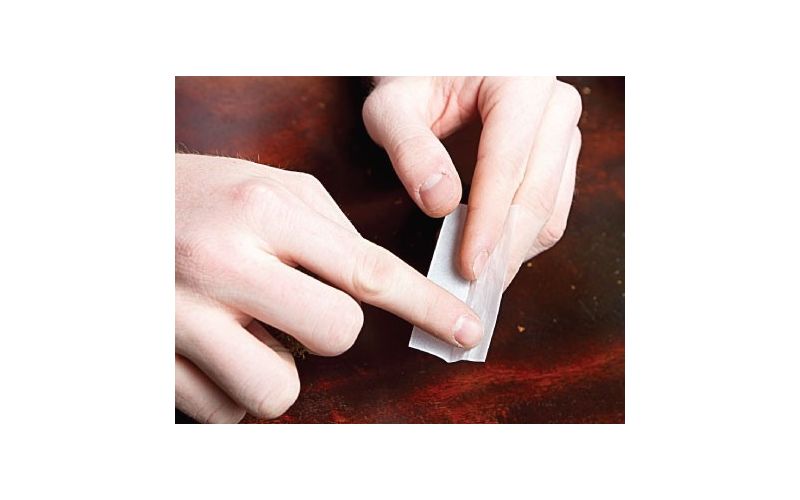 The Smoking Lamp’s Tavner Myers and Matthew Cannon aren’t teachers by trade. However, in the midst of the cigar smoke and ashtrays, along a back wall at the Smoking Lamp, they took some time to teach us how to roll a cigarette.

First, you remove a rolling paper from its packaging. Both recommend one-inch paper, and Cannon advises beginners against anything much bigger than that. “A common misnomer is that you want a longer paper, but it’s not going to make it any easier,” he says.

Out of the packaging, most papers are already creased down the middle. The first step, according to Cannon and Myers, is to fold the paper yet again, creating a sort of trough, which will hold the tobacco. Once your paper is prepared appropriately, grab some tobacco, but try to avoid the “shake,” which is any of the really loose stuff, because it will burn quicker and is harder to manage.

“The tobacco can get packed in the bag very easily,” Cannon says, suggesting you make sure it’s very fluffy in the paper before going any further.

Once the tobacco is evenly distributed and lightly packed in the paper, it becomes all about the thumb, forefinger, and middle finger. “Your middle finger is supporting it in the back,” Myers notes, “and you’re using the forefinger to press down on the tobacco while the thumb presses up from the bottom.”

Then press down a little bit on the tobacco, and in an almost pinch-like motion, try to create a cylinder shape using your thumb and middle finger. At this point, your forefinger is mostly a guide to ensure the shape remains intact.

Next, you’ll switch your fingers around a little bit and use your thumb on the bottom while your forefinger is on the front. Place your middle finger on the back of the paper and lightly push down the lip.

Finally, lick the glue-covered edge and press down lightly on the cigarette.

Be conscious not to roll too tightly because it won’t draw, Cannon and Myers note, but if it’s too loose, your cigarette won’t burn straight through, either.