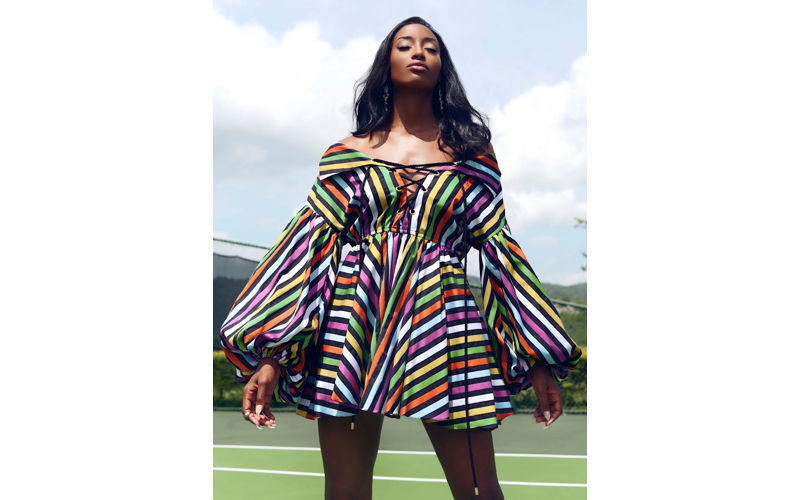 In Charleston, there’s no shortage of sunsets, beaches, palmettos, and porticos of which to take pretty pictures. And many people do, with the Holy City’s picturesque scenery inspiring countless wedding shoots, Instagram posts, and lifestyle blogs. So how does a photographer produce standout work in such a photogenic city? To find out, we spoke to four local and emerging shutterbugs about what makes their work unique, and where they find their inspiration.

Christopher D. Cavanaugh is originally from Walterboro, S.C.. He recalls having a camera in his hand as early as grade school. The stories he tells with his photographs are of models, celebrities, and glamorous drag performers. “I’ve always been into fashion. The whole celebrity aspect of my work came through my interest in fashion,” says Cavanaugh.
While attending Summerville High School, he connected with many aspiring models and performers and took their pictures. Then he started shopping his work to local modeling agencies. But it wasn’t until 2018 while driving part time for Uber that he got his big break.

“I picked up my ride and she asked what I did when I wasn’t driving. I told her I was a fashion and celebrity photographer. She said, ‘Well, guess who I am?'” It turned out she was the vice president of design and user experience for digital at BET Networks. “By the end of a 30-minute drive we were like family.” Cavanaugh now calls BET a client, in addition to having worked with Tina Campbell from the duo Mary Mary, America’s Next Top Model alum and actress Eva Marcille, and Keeping Up with the Kardashians.

For photographer Ryan Belk, who works full time doing digital marketing for his church, it’s the smaller, more everyday moments that interest him. “I look for interactions between people … I love Charleston because it is still small enough to have a lot of quirks.”

His images are often ironic, if not outright funny, capturing tender and peculiar exchanges between people. Like the image of a man smoking on the street, locked in an unlikely exchange with a woman as he walks two dogs on one leash. Everything in the frame seems out of place and yet perfectly cast.

In another of his photos, a couple kisses in a laundromat, sitting on one of the folding stations. The setting couldn’t be more mundane and drab, and yet the photo is arresting, intimate. It’s even more intriguing that this is an engagement photo. The couple had seen images of a laundromat series Belk did while he was in school and told him, “We want to be a part of this style of work.”

Like Cavanaugh, Belk started taking pictures at a young age. His grandfather, who he says was always taking photos, taught him on a 35 mm camera when he was 10-years-old. At 18, he began taking photography more seriously and enrolled in the Art Institute of Charleston. “Working at a church, I care about people,” says Belk. “It’s hard not to have my passion for people influence my work.”

In the photography of Stephanie Stein, a Boston native who has been living in Charleston for 15 years, that people connection is critical to distinguishing her work in a crowded field. The majority of her photos are intimate, often nude, portraits of women in nature. The female nude, of course, has a long and storied tradition in Western art history from Venus de Milo to Picasso’s Les Demoiselles d’Avignon. So, how does she make it new? “I talk with my models before every shoot, I ask them about their stories, their traumas, so we can work through it together on the shoot,” Stein says.

Nonetheless, she had difficulty breaking away from the pack of Instagram photographers at first, until she posted the image of three women, nude, holding hands in a circle atop a lush mountain ridge. She says that image really resonated with people. It is also a clear illustration of her interests as a photographer. “A lot of my work is about female empowerment, which to me means being free to be who you are at your core and unencumbered by who society tells you you are supposed to be.”

If less “natural,” in their composition, Timothy Kelly’s photos are nonetheless striking and atmospheric. The images of the 22-year-old Instagram influencer, photographer, and model at the beach and traipsing around Charleston in inspired fits, conjure a faded, tawny and bygone American summer; a fever dream of tan skin, dark shades, and dappled light a la The Talented Mr. Ripley.

Kelly’s photographs exude a style and sensuality that manage, in short, to transcend the two-dimensionality of many lifestyle brands. He says he got his start doing more conceptual photography. “My photos back then were more out there. And I spent more time on Lightroom and Photoshop editing them than taking them.” Having never formally studied photography, characteristic of his generation, he learned from the internet, watching YouTube videos, inspired by his friends and film. “I like working with a 35 mm automatic … I like not being able to see what I’m capturing in the moment.” Already courting clients like Doc Martens, ultimately Kelly wants to have a career as a content creator and brand strategist.

All possessing very different styles, these young photographers are ones to watch as they continue to grow their followings and hone their visions. You can learn more about their work by visiting their websites: Christopher D. Cavanaugh (chrisfotostudios.com, @TheChrisCavanaugh), Ryan Belk (ryanmichaelbelk.com, @RyanBelk), Stephanie Stein (stephaniestein.net, @StephanieSteinPhoto) and Timothy Kelly (timothykellyj.com, @TimothyKellyJ).