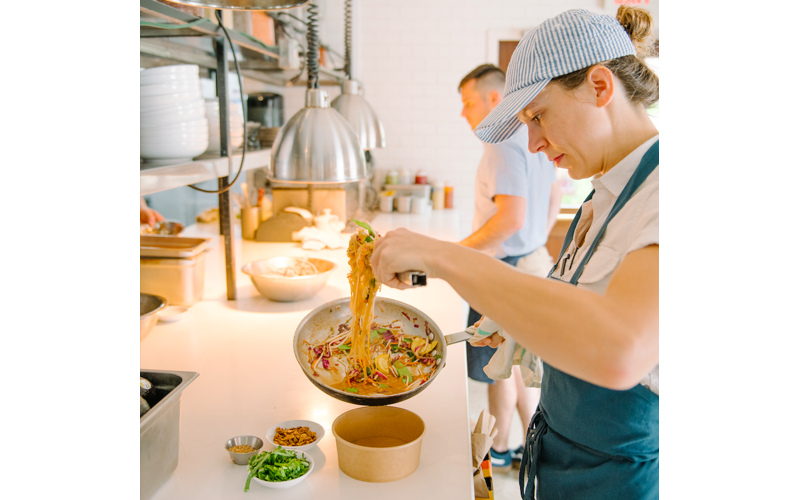 Along with elegant villas, simple peasant dwellings, and a massive amphitheater, the ruins of Pompeii were filled with “thermopolia,” small shops that prepared hot food for hungry Romans on the go. If takeout has existed since 79 A.D., delivery has been around almost as long.

While the 2,000 years since were primarily dominated by the transport of pizza and Chinese food, the last 10 have more or less changed everything. From burritos and bagged ice to groceries and cigarettes, there’s almost nothing that someone won’t deliver to your door these days.

With offerings ranging from nationwide fast food chains to eclectic, high-end restaurants, almost anything your heart desires is available from the likes of Grubhub, Uber Eats, and Postmates. Yes, it’s inarguably a great time to be alive — not to mention lazy — but what does all this delivery mean for local restaurants?

“We live in an ‘I can have everything now’ culture,” says Tres Jackson, chef/owner of Sorghum & Salt. “At the same time, it makes sense for people to have the option to have food delivered for, say, lunch while they’re at work. And I can see delivery being useful and even super convenient for restaurants with a consistent menu.”

So it’s probably not surprising that Sorghum & Salt, a fiercely farm-to-table eatery, doesn’t offer delivery, or even takeout for that matter. “Although we do on occasion have someone order something to take with them, we don’t offer call-in takeout, and I don’t foresee us ever offering delivery,” Jackson continues. “For one thing, our menu is constantly evolving, and it would be hard to keep updated. Secondly, we choose to focus on the guests and their experience here, and perhaps most importantly, I don’t think it would be the best presentation of our food, as the focus on showcasing fresh ingredients would be lost in translation.”

Still, many are on board, with varying motivations and results. “Thanks to Wall St., There May Be Too Many Restaurants,” was the headlines in The New York Times in Oct. 2017, forecasting hard times ahead for the restaurant industry.

Along with rising costs, labor shortages, and fluctuating customer preferences, the Times noted that “Since the early 2000s, banks, private equity firms, and other financial institutions have poured billions into the restaurant industry as they sought out more tangible enterprises than the dot-com start-ups that were going belly-up. There are now more than 620,000 eating and drinking places in the United States, according to the Bureau of Labor Statistics, and the number of restaurants is growing at about twice the rate of the population.”

In a world where supply greatly outpaces demand, what’s a restaurant to do?

“We started with Uber Eats about five months ago because wanted to boost our daily sales,” says Jeremiah Schenzel, chef/owner of Daps Breakfast & Imbibe. “They offered to let us try it out before we committed full time, and we thought it would also help get our name out there a bit more.”

And while the venture is currently going well — nearly 20 percent of the hip eatery’s Fruity Pebble pancakes and spinach and mushroom hashes are sent out the door — there are a few inherent challenges. “We don’t offer our whole menu for delivery,” explains Schenzel. “Some things just don’t travel well, so we don’t include them as options.”

This is wise, as reviews — particularly those left on large, crowd-sourced forums like Yelp — can be damaging out of context. “I like to think that people who are ordering food online are also understanding that it is not going to be exactly how it would be actually eating it in the restaurant,” he notes.

Healthy favorite Basic Kitchen shares a similar hope, telling us, “We always want our food to be presented well, so we carry that over to the to-go orders, understanding that when the dish leaves our restaurant, we lose control.”

In their Feb. 2018 article “How Delivery Apps May Put Your Favorite Restaurant Out of Business,” The New Yorker found that delivery — beyond the issues of food transport — might not be all it seems.

Michelle Gauthier, owner of New York’s Mulberry & Vine, told them, “We know for a fact that as delivery increases, our profitability decreases. For each order that Mulberry & Vine sends out, between 20 and 40 percent of the revenue goes to third-party platforms and couriers. I think it’s a far bigger problem than a lot of operators realize. I think we are losing money on delivery orders, or, best-case scenario, breaking even.”

In short, for those in a more-seasoned delivery environment, such as New York, San Francisco, or Los Angeles, those orders may augment some sales, but cannibalize others.

To that point, in a research report published in June 2017, Morgan Stanley found that 43 percent of delivery patrons acknowledged that a meal they ordered with a courier service replaced one they would have otherwise eaten at a restaurant. The study projected that the total U.S. food delivery market could grow from $11 billion to as much as $210 billion, and that — by 2022 — online food delivery is likely to expand to account for 6 to 11 percent of total food sales.

Here in Charleston, however, it’s a relatively new phenomenon and seems to be a boon for all parties. “I think it opens a lot of doors,” says Schenzel. “It can give you a boost on slower days, even if it’s just a small part of your sales.”

At Basic Kitchen — where roughly 10 percent of food sales are for carryout, and about half of that includes their partnership with Postmates — a spokesperson shared downright altruistic intentions for joining the service.

“We recognized that a lot of our guests weren’t always able to take a lunch break, but wanted to eat healthy. Our lunch menu offers a lot of options for people who need healthy fuel to keep their workday going. It’s also a great way to try new menus without going out constantly, and we especially see it booming at lunch, when parking and time can be limited.”

Intriguingly, a number of fine dining establishments appearing as top-rated options on DoorDash and Postmates responded to my inquiries, but wished to remain anonymous for this story. “It’s great for certain types of establishments, but we believe that delivery services are probably best-suited to a different type of guest,” one told me.

However, he goes on to say that while the restaurant does offer to-go service, they don’t promote it. Nonetheless, couriers for the services are clearly hip to the option. When asked, the fine dining spokesperson says, “If the demand for to-go starts to get heavier, we will probably stop offering the service.”

Whether the future of food delivery includes complex subterfuge to liberate and convey Michelin-starred meals, drones dropping bags of KFC, or something in between, it’s still comforting to know that we live in an age where you can get Daps B’Fast Banh Mi or Basic Kitchen’s Buffalo Fried Cauliflower brought to your couch.