How (and why) the humble Recovery Room became the nation’s No. 2 PBR seller 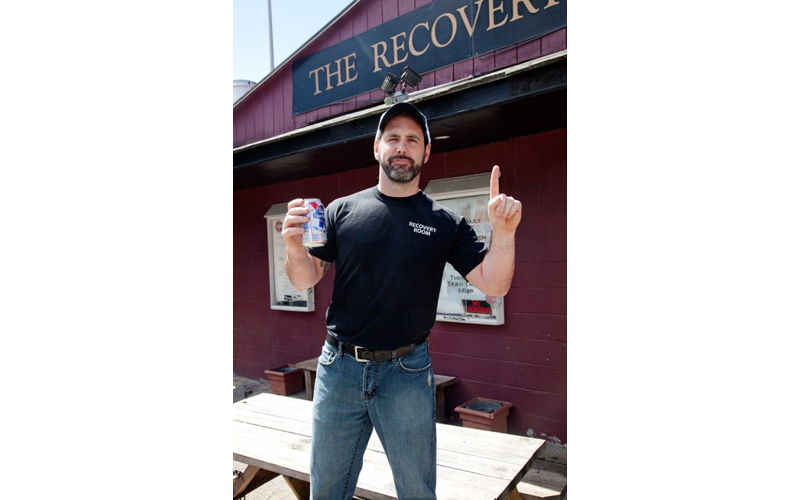 There’s nothing to be said about the Recovery Room Tavern that can’t be said about any other dive bar under any other overpass in America. It’s a windowless hovel on Upper King Street with pinball, pool, and foosball, its walls decorated according to no particular theme and its restrooms bedecked in vulgar latrinalia. But for the loyal patrons who helped earn the bar its astonishing No. 2 ranking for selling 12-oz. cans of Pabst Blue Ribbon beer last year, it’s their windowless hovel.

“I look around my bar on a Friday night, and it’s like, ‘He’s a lawyer, he’s a doctor, he’s an architect,'” says Chris “Boston” DiMattia, owner and bartender at the Recovery Room. “You know, I have celebrity chefs hanging out in there just drinking PBR, being themselves. We welcome everyone. Right next to those guys is the dishwasher, is the pedicab kid, is the guy who got off work at 4 o’clock and has been there for seven hours at that point, and he’s an electrician. And it’s like, ‘Don’t worry about him; if he falls over, just let me know. He’s really friendly.'”

DiMattia, who opened Rec Room in 2008 and still tends the bar 40 hours a week, was as surprised as anybody to find out that his humble establishment had managed to sling more of the hipster-approved Blue Ribbon pilsner than almost any other watering hole in the country. In 2011, the first year he found out about the rankings from a PBR sales representative, his bar came in second place to a Manhattan bar where PBR sells for $3 a can.

At Rec Room, where PBR cans go for $2 normally or $1.25 during happy hour, DiMattia estimates that PBR accounts for 25 to 30 percent of sales. The last time DiMattia checked six months ago, his bar was also Charleston’s No. 1 seller of Yuengling draft. Cheap domestic brands dominate despite the fact that the bar offers over 60 beers, including about 40 microbrews. DiMattia says that even when people come in and order a high-gravity craft beer, they usually downgrade to PBR as the night wears on. “I just think PBR is a social beer, and it’s definitely a social bar,” he says. “What makes it great is people tend to get up and walk around, and you bump into people, you meet people, and you start talking. And it’s really hard to sit and have long conversations if you’re drinking beers that are like 9 percent.”

The New York City bar that beat Rec Room for the last two years, a billiards and music hall called Fat Cat, has plenty of advantages: It’s just around the corner from New York University, it’s got 10 pool tables and 10 ping pong tables, and it’s in a city that’s 67 times the size of Charleston. And yet, in 2012, Fat Cat only beat Rec Room by 39 cases — slightly more than Rec Room sells on a single Friday night.

Reached by phone, a manager at Fat Cat said he had never heard of the PBR rankings. “I would take the honor if it was really deserved, but I don’t know,” said manager Ben Gee.

It’s not as if Pabst publishes the standings every year. DiMattia got the figures from Jay Toxey, a Pabst area sales manager whose turf encompasses Georgia and South Carolina. “Chris is the kind of guy that wants to know,” Toxey says.

DiMattia hasn’t gotten any updated figures for 2013 yet, but he knows he’s about 300 cases ahead of where he was last year. Rec Room currently goes through about 105 cases a week, which works out to 2,520 cans, or 236 gallons of yellow, watery, no-nonsense booze.

“This is beer. It is what it is,” DiMattia says. “They’re not gonna give you an ad with a bunch of hot chicks dancing on a beach. You’re not gonna get laid drinking this beer, but you’re gonna get drunk … you know, if you have about 15 of them.”

To understand why PBR is such a big seller at the Recovery Room, you have to understand something about the ethos of both companies. There are a few striking parallels.

After falling on hard times in the late ’70s, selling off its breweries, and contracting brewing operations out to plants owned by MillerCoors, the Pabst Brewing Company staged a remarkable comeback over the past decade. According to a 2011 article in the Chicago Tribune, Pabst Blue Ribbon brand volume increased by a whopping 69 percent from 2005 to 2010, riding a wave of young customers and populist grassroots marketing.

“Back in the early 2000s, it caught hold out in Portland, Ore., as being a value beer, being retro, and not being your dad’s beer, and it’s kind of caught fire since then,” Toxey says. “So we have a brand that’s very unpretentious, and we don’t shove it down your throat like other brands. We do the selling based on the fact that it’s a quality product at a fair price.”

Toxey says that in his experience, the biggest sellers tend to be “working-class type of bars,” and the Rec Room falls squarely in that territory. And DiMattia, an easygoing Massachusetts transplant who goes by the sort of straightforward nickname — “Boston” — that people come up with late at night in bars, has deep roots in blue-collar culture.

DiMattia grew up in Quincy, a Boston suburb he describes as a “white tough area” and “a place you’d never visit.” As a teenager, he worked at a Boston marina, which was the first place he heard people talking about a warm far-off place called Charleston. The older guys who worked on megayachts at the marina would tell stories about traveling down to the Caribbean, and every one of them said he loved docking at the Holy City en route.

DiMattia enrolled in the business program at the College of Charleston in 1998, earned his degree in four years, and then moved back home. But Charleston had spoiled him, and he didn’t last long back in Massachusetts. “It just sucked. It was just cold, the people were miserable. I worked at a strip club, which was kind of fun, and then I did construction during the day, and after about one year, I was over it,” he says. “Charleston was an easy place to move back to.”

Returning to Charleston, he found work at Moe’s Crosstown Tavern and in the cafeteria at his alma mater. The work was steady, but he says it knocked him down a peg. “I mean, you see your old professors from school who were expecting you to do bigger and better things, and they’re like, ‘Oh, you graduated, right?'” he says. “It’s like, ‘Yeah, yeah, I’m here. I’m the cafeteria catering guy.’ But you know, it was experience, and it’s good to be humbled like that.”

DiMattia had a dream to open his own bar one day, but he lacked the startup funds. Then one day he caught wind that a family that lived next door to Moe’s was looking to lease out a vacant bar property they owned on upper King Street. DiMattia says the bar, which in previous incarnations had been called E&B Social Club, Chi Chi’s, and Club Pyramid, was always a black bar — until gentrification started to push all the regulars out of the neighborhood. He says he had gotten to know the owners’ sons at Moe’s, and when he went to visit the modest bar under the Crosstown at 685 King St., the owners leased it to him the same night, giving it to him rent-free for the first six months so he had a little cushion time to secure all the licenses he needed.

By then, he had come to love the neighborhood. “Upper King was pretty shitty, and it was funky, and it was dirty, and it was like, ‘Man, this place is kinda weird. I kinda like it,'” DiMattia says. Early on, he says, the customers were all friends of friends, including plenty of folks who got off late from food and beverage jobs. At some point, he started keeping an enormous garbage can behind the counter and filling it with ice and PBR cans. The bracingly cold beer sold quickly to culinary elites and neighborhood tipplers alike.

These days, DiMattia can hold his head up around his old CofC professors, some of whom have asked him back to speak to entrepreneurship classes. The Rec Room has increased sales every month since opening, and DiMattia has even diversified, buying five duplex rental properties in the neighborhood. His bar now sits where two Charlestons meet. To the north, things are closer to how he remembers them being when he came to town in ’98. To the south lie high-end bars and restaurants that sell $15 cocktails, charge at the door, and sport lines of people waiting on the sidewalk to try the hot new thing.

It’s not that DiMattia resents the classing-up of Upper King; he loves a well-crafted cocktail as much as the next guy. But he also knows that some of his customers are the weekend warriors who get tired of waiting in line, start walking north, and stumble upon their new favorite hole in the wall.

“Change is coming,” DiMattia says. “You can see it now with all the hotels and restaurants coming in on Upper King. But I’ve been bartending up in that neighborhood since ’03, and I mean the change was so much slower before, and now it’s like a bulldozer coming at you. Whether it’s good or bad, who knows.”

Five places to buy a swimsuit