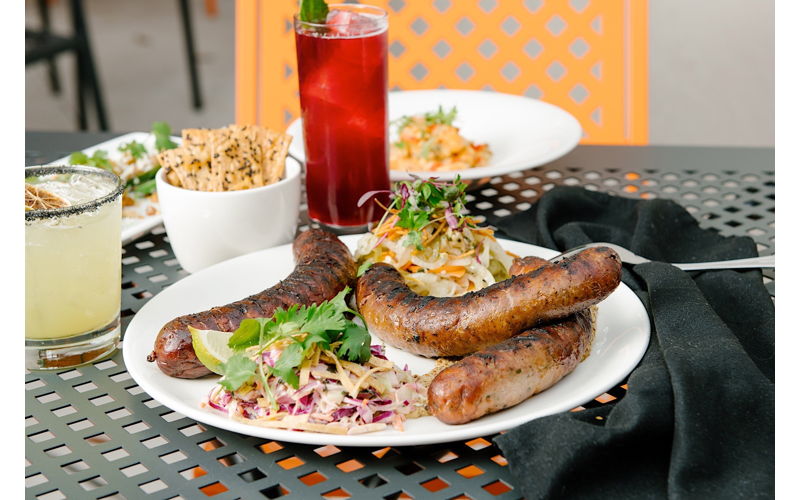 There are men, and there are “men’s men.” The latter are often described as confident and masculine — the type of man other men want to be. On that note, Butcher & The Boar is a “man’s man” of restaurants. Cocksure and handsome, he’s well-heeled, but easygoing, pulling out a chair while proffering a well-curated array of beer, bourbon, and meat.

The Sausage Sampler ($29) features links of wild boar hot, Texas beef, and Berkshire pork and cheddar. They arrive casually slung amidst pools of barbecue sauce and whole grain mustard, plus a crisp, flavorful mound of red cabbage slaw. The menu also indicates an accompaniment called “stukel,” a foodstuff so rare that the only internet references to it are directly tied to the restaurant’s original Minneapolis location. Process of elimination implies it’s another name for the generous portion of what I would call giardiniera — a fiery melange of hot pepper-infused pickled cauliflower, onions, and carrot slices.

The Boar makes their sausage in house, and it’s a notable strength: The Texas beef link is dense and meaty, with some notable fiery heat. Equally substantial and also possessed of some kick, the wild boar hot link has pronounced chili powder notes. In contrast, the juicy Berkshire pork link — oozing with rich, melted cheddar cheese — is understated and approachable.

As far as the vibe, like any worldly, yet down-to-earth man about town, the Boar offers both elegant charm and casual fun. Similarly, the spaces — and menus — are divided into the chic, subdued interior with its swanky steakhouse fare, and the relaxed outdoor beer garden and its informal eats. At the former, expect wood-fired ribeye ($48) and New York strip ($42), or a salt and sugar-cured beef long rib ($49) that’s been smoked for 14 hours.

With the exception of the smoked pork chop ($39) or 8-ounce filet mignon ($39), the patio menu eschews such formality, focusing on a mix of starters, salads, and sandwiches. The steak tartare ($16), made with bone marrow aioli, jalapenos, and cornichon, arrives looking like a Hostess Sno Ball. “What’s that?” asked my dining companion, pointing suspiciously at the ethereal, flaky white mound.

The answer is a confusing mix of cheese, cheese, tender raw meat cubes, cheese and ‘why’? Completely and utterly dominated by the fine strands of salty pecorino, no trace of the jalapeno, cornichon, or bone marrow can be discerned. On the upside, the oil-rubbed grilled bread shines — a lone voice in the otherwise pecorino-drenched choir.

The snapper ceviche ($14) raises still more questions. A mismatched marriage of Central American tradition, Greek accouterments, and the Anchor Bar in Buffalo, N.Y., what arrives are chunks of fresh, tender snapper bathed in a vibrant orange sauce that tastes remarkably like Tabasco. Topped with pine nuts, yogurt dollops, fresh mint, and served with a bowl of arid seeded crackers it’s … not ceviche. If renamed something along the lines of “Buffalo-style crudo,” the elements might make more sense.

Sadly, service on the patio is also hard to nail down. Due perhaps to the 45-degree nip in the air and a lack of heaters, bonfires, or Tauntaun sleeping bags, our server was something of a phantom. This was exacerbated by a sudden descent of wait staff and the unexpected arrival of all six dishes at once. Coupled with the cramped real estate, the chilly temps made it a challenge to “get it while it’s hot.”

One dish that didn’t suffer any detriment from the Minnesota-spring weather was the peanut butter-stuffed jalapenos ($11). Here, seven halved, grilled jalapenos arrive artfully plated and filled with a trio of peanut butter, boiled peanuts, and chopped roasted peanuts. The unusual hat trick of peanut preparations is then adorned with crumbles of cotija cheese, pickled golden raisins, and fresh cilantro. It’s unclear what may have inspired this recipe — a Chopped mystery basket? Double-dog dare? LSD? — but no.

Cold, hot, in a box, with a fox — this is basically an inadvisable twist on ants on a log.

The “On a Bun” options, however, are solid bets.

The Boar foot long ($12) features a juicy, meaty dog enveloped in a disproportionately outsized brioche bun, the David Byrne-suit of breadstuffs. That aside, the net result is familiar, yet creative, topped with piquant Cajun chow-chow, Fresno peppers, mustard, and mayo.

For $3, one can swap the standard-issue potato chips for fries, Brussels sprouts, or a wedge salad, all of which are worth it. The Brussels are deep fried, then tossed in a tangy, spicy Buffalo-style glaze, while the fries are superlative — a frite by any other name. Similarly, the wedge salad — where even as a side dish, is presented as an actual wedge — shines with house-smoked bacon, blue cheese bits, and balsamic-infused tomato syrup. Despite my general apathy toward ranch dressing, iceberg lettuce, and DIY salad assembly, I’d order it again.

Last, but not least, the butcher burger ($13) is good reason to freeze one’s ass off on a dog-festooned outdoor deck. Juicy, flavorful, and gilded with bacon in two forms, it’s indicative of the Boar’s strengths. When it comes to ground meat formed into a patty or encased in intestines, they know what’s up.

All told, there are kinks to iron out, and the meat-heavy menu may not appeal to everyone. Still, despite a primary focus on beer, bourbon, and beasts, Butcher & The Boar offers enough variations on the theme to satisfy a wide array of tastes.