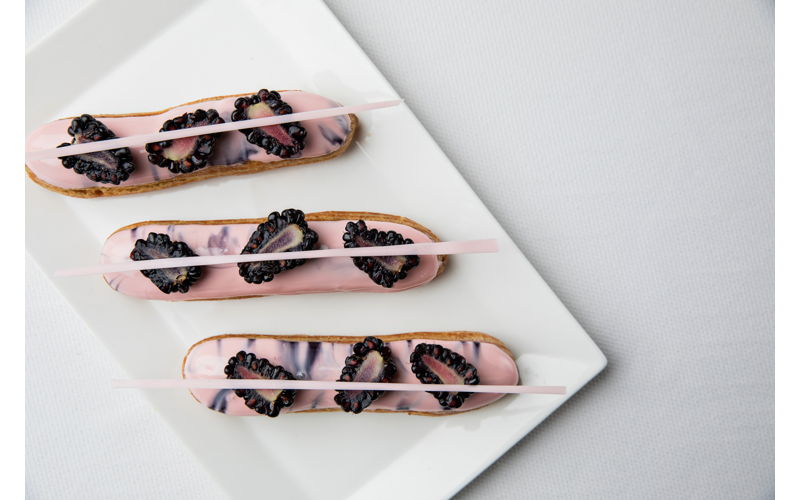 Roses, roses all the way

We’re familiar with milk, dark, and white, but have you ever tasted ruby chocolate? This deep pink “fourth chocolate” gained cult popularity earlier this year when it became the first new shade to debut since Nestle unveiled their white chocolate bars in the 1930s.

[content-2]Starting this weekend, Hotel Bennett’s La Patisserie will offer this new varietal in three different treats thanks to the creativity of Funfrock, who discovered ruby chocolate in 2018, but didn’t start working with it until five months ago. According to the French-born pastry chef, the natural ruby cocoa bean, which is found primarily in South America and the Ivory Coast, is fermented but not roasted like other cocoa beans, giving it a subtle chocolatey flavor with a little acidity behind it.

Ruby chocolate’s sweet yet sour flavor profile makes fruit a logical pairing, and this became the inspiration for two of Funfrock’s new desserts. The pastry chef makes his own caramelized puffed rice, and he decided to coat it in a dehydrated raspberry-infused ruby chocolate.

To make the coating, Funfrock melts the European-imported Callebaut ruby at 45 degrees Celsius, then cools it to 27 degrees Celsius before finally bringing it back up to 32 degrees. The raspberry is added in at the end of this process.

According to the chef, this crunchy snack is a great way to get the true essence of ruby chocolate. Another of his ruby creations, the rubéclair, combines the chocolate with a blackberry compote, with the end result being a treat where raspberry is not the predominant flavor. Funfrock explains that the weekend-only offering is unique because he only uses blackberries as opposed to the more common mixed-berry pairing that shows up in pastries more often.

Winter is coming, so the pastry chef thought it was also a fitting time to test out a ruby hot chocolate. Playing on the ruby’s acidity, Funfrock tops the hot cocoa with a milk chocolate yuzu marshmallow that melts as you enjoy the warming beverage. The unexpected flavor is hard to pinpoint, but it gives the hot chocolate an earthy undertone that truly sets it apart.

Visit the King Street facing patisserie daily from 7 a.m.-7 p.m. for a taste of this rare ruby treat.