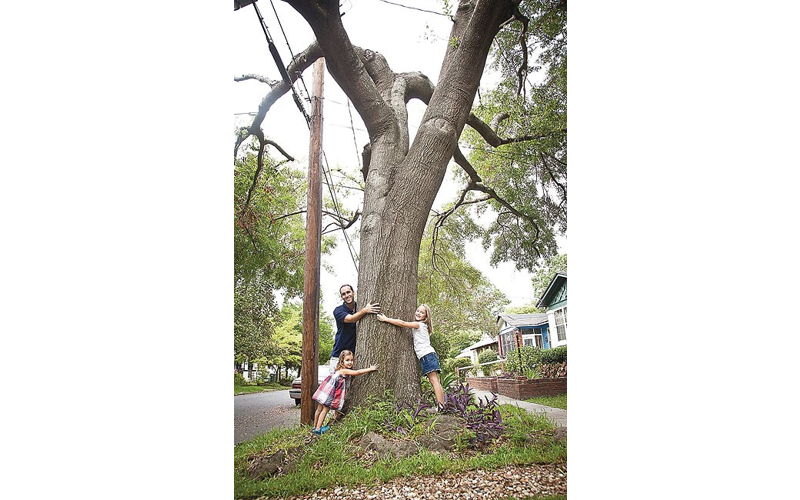 There is only one magnolia tree left on Magnolia Avenue. Its waxy leaves and skyward-reaching branches look healthy enough, but eventually, the tree will pose a threat both to itself and to the people living behind it. One day, it’s going to come too close to the power lines, creating a risk for fires, electrocution, and power outages.

David Thompson lives across the street from the lonesome magnolia in the downtown neighborhood of North Central, and recently, he saw firsthand what happens to stately old trees when they impinge on the electric company’s airspace: South Carolina Electric & Gas hires a crew to lop off entire branches. It happened in July with a water oak in Thompson’s front yard, which is now missing a triangular swath of limbs in its middle. Aesthetically, the effect is like a very bad haircut.

Thompson knew it was coming. As an architect, he first saw SCE&G pruning trees on his drives out to a job site on Edisto Island. “For the past two or three years, I’ve just feared the day that they showed up to do it,” Thompson says. On the day when the trimmers finally came to Magnolia Avenue, his wife called to tell him. His two-year-old daughter Ella cried and asked why the strangers were hurting their tree.

According to an SCE&G spokesperson, the company has trees trimmed on a five-year cycle, and the time recently came for trees in North Central and Wagener Terrace to go under the blade. Now, some of the oaks on Rutledge Avenue look like they’re trying to make the Y in the “YMCA” dance, and Thompson says he’s heard “a little bit of an uproar” around the neighborhood this summer about the trees. This is not to mention the loss of shade in his yard and house, nor the possums and squirrels that he says have been displaced.

Danny Burbage, the City of Charleston’s urban forester, knows exactly what Thompson is complaining about. And he gets it. “Utility pruning is almost always going to look unattractive,” Burbage says. “It just is. But given what they’re charged with, what the crews in Charleston and those specifically that prune in this neighborhood have done is pretty much state-of-the-art and as good as it can possibly get.”

Burbage explains that 25 years ago, tree trimmers used to cut limbs in a way that rounded out the shape of the tree, with none of the bizarre angles and unsightly gaps that are common today. But the technique wasn’t healthy for the trees, as it left open wounds that were susceptible to rot.

Trees contain hormones that help them to regenerate tissue when a limb is lost. But, as Burbage explains, those chemicals work best near the joints where branches intersect with the trunk or with other branches. As a result, modern tree crews will cut branches very close to the joint, in an area known as the collar, resulting in trees that look like they’re chopped all to heck but are actually better off in the long run.

In Charleston, SCE&G employees keep an eye on the trees, and when they see branches within 10 feet of electric lines, they call Burbage at his city office. At least 30 days before taking any action, SCE&G has to submit blueprints of the affected streets and rights-of-way. Then Burbage drives down those streets. If he sees that one of the trees is particularly historic or majestic, he talks to nearby property owners and the electric company to find a resolution. If Burbage gives the go-ahead, SCE&G calls the Lewis Tree Co. to send out a crew with pole-mounted chain saws, and they prune away.

Burbage notes that many of the trees in North Central and Wagener Terrace are water oaks and laurel oaks. Those trees were planted around the time of the Great Depression, and they have a life span of about 70 years. Burbage says that nowadays, when city employees plant a new tree in a right-of-way, they usually select something that won’t grow tall enough to interfere with power lines: a crape myrtle, a Chinese elm, an indigenous redbud, or an iconic palmetto. But when the surroundings do call for a tall, expansive tree, they go for a live oak. Not only do live oaks grow for hundreds of years, but they heal better, he says, and they can be “trained” through pruning to grow horizontally away from power lines.

Thompson thinks the city should consider burying its power lines, as many other tree-bound cities have done, although he acknowledges that it’s an expensive proposition. According to SCE&G, underground power lines cost eight to 10 times as much to install as above-ground lines.

Burbage points out that if a neighborhood wants to go underground, it can make a request through City Council. The Council then passes the request along to SCE&G, who will survey the neighborhood to see if enough people are interested. Then the city, SCE&G, and the residents split the cost of installation.

In the meantime, North Central and Wagener Terrace are home to some oddly butchered oaks. Julio Avendano has to look at one such specimen when he walks in to work at Torres Superette on Rutledge Avenue. Just across the intersection, a recently trimmed laurel oak holds up its arms in surrender to modernity.

“It’s saddening when you see something like that,” Avendano says. “It’s not meant to grow like that.”

Not everyone is as incensed with the newly shorn trees as Thompson or Avendano, though. Emily Coaxum, who can see the same tree as Avendano from the front steps of her house, doesn’t understand what all the fuss is about. “It’s fine with me,” Coaxum says, then purses her lips dismissively. “If the branches come down, I’m losing my power. That’s my lights. That’s a stupid complaint.”